The climate crisis is here and it is already killing people 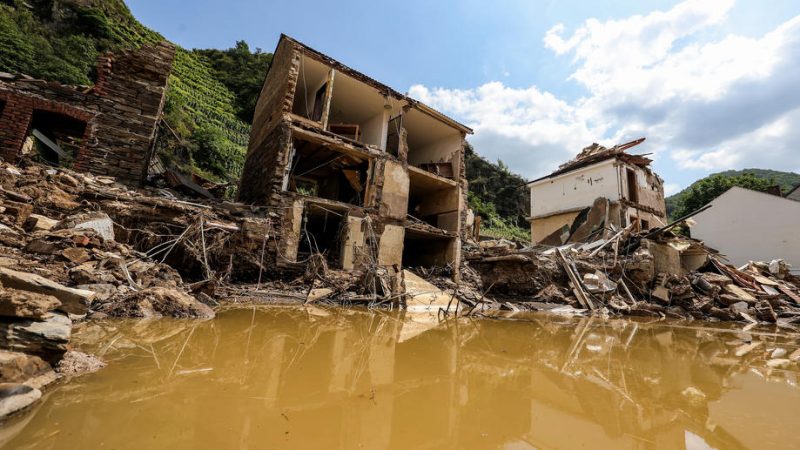 Destroyed houses after the flooding of the Ahr River, in Mayschoss, Germany. Large parts of Western Germany were hit by heavy, continuous rain resulting in local flash floods that destroyed buildings and swept away cars [FRIEDEMANN VOGEL / EPA-EFE]

This is the moment for urgent and equitable action to prevent dangerous global warming and address the climate crisis, ensuring that those responsible for it do not end up paying the heaviest price, argue climate activists.

Juliet Oluoch is a young conservationist and climate activist from Nairobi, Kenya. Rain Bello is a Climate Reality Leader from Quezon City, Philippines. Mark Watts is the executive director of C40 Cities, a network of the world’s 100 most powerful cities focused on halving global emissions within a decade.

So far, hundreds of people have died in the record-breaking temperatures currently affecting North America. Hundreds more have been killed by flooding in Germany. This is shocking, but, sadly, not surprising.

We are three climate activists whose lives and experiences span two generations and three continents, but are united by our conviction that only urgent, large-scale and equitable action to reduce emissions and adapt to new climate normals can prevent a future in which more and more people face death and disease from human-caused global heating, with those who have done the least to cause the problem the worst affected.

The impacts of a rapidly heating planet are worse than they have ever been, and people are suffering today. This summer, unprecedented high temperatures in the Middle East, South Asia, Russia, Eastern Europe, and North America have led to heat-related illness and death for people across the globe.

In Islamabad, at least 20 schoolchildren were hospitalised as a result of extreme hot weather, while in Portland, Oregon, the city’s emergency department became “overwhelmed” with patients unwell from soaring temperatures last week.

Around a third of all heat-related deaths around the world are attributed to human-caused global heating. But high temperatures don’t affect everyone equally. Rising poverty in many parts of the world, exacerbated by the COVID-19 pandemic, means an additional 50 million people are likely to be experiencing extreme heat without access to fans or air conditioners.

High temperatures can intersect with existing injustices – a recent study in the US found that people of colour were exposed to higher levels of heat stress than white residents in all but 6 out of 175 major US urban areas.

The climate crisis is fundamentally unjust. The people and places most affected by higher temperatures and extreme weather have done the least to cause it.

The average person in sub-Saharan Africa is responsible for about one-twentieth of the emissions of someone from the US, yet this March, experts reported that extreme climate events across East Africa are already fuelling the spread of diseases such as cholera, dengue fever, malaria and chikungunya.

Outbreaks of Ebola are also expected to increase. Climate disasters may also lead to long-term mental health difficulties, such as in Tacloban in the Philippines, where doctors have noted rising cases of post-traumatic stress disorder and depression in the years following Typhoon Haiyan of 2013.

The richest in every society are responsible for massively more pollution than everyone else, and globally the wealthiest 10% have been responsible for nearly half the rise in emissions throughout Rain and Juliet’s lifetimes.

The continued burning of fossil fuels is not only cooking the planet, it is poisoning the air we breathe.

In Indonesia, a study last year found that air pollution from coal-fired plants alone was responsible for an estimated 2,500 air pollution-related deaths in Jakarta, as well as health impacts such as respiratory diseases, preterm births, and diabetes. Globally, about 1 in 5 deaths each year are a result of breathing in air polluted by burning fossil fuels.

All of these impacts to human health and wellbeing are happening at around 1.2°C of heating since pre-industrial times, and we are currently on track for 3°C heating by the end of this century. We need urgent and radically equitable action now.

At the global level, that means high emitting countries must reduce their emissions by more than 50% by 2030 and transfer the still unpaid $100 billion per year promised to developing countries to help them deal with the effects of climate breakdown.

Investment in new fossil fuel projects must stop immediately, and coal power must be rapidly phased out. Most importantly, the unprecedented trillions of dollars of government stimulus to recover from the pandemic must be decisively invested to create green and just societies everywhere.

As C40 research shows a green and fair recovery will create more jobs, faster, and, without this, we cannot achieve the rapid and large scale emissions cuts necessary to avert climate disaster.

This is it – this is the moment from when every decision has to help cut emissions and reduce inequality. As the United Nations Secretary-General says, we are on the edge of the abyss and so our next step has to be in the right direction.

As home to more than half the world’s population, action taken by cities plays a huge part in cutting emissions. To date, at least 700 mayors in 53 countries are committed to halving their emissions by 2030. We need thousands more to join them.

As well as reducing emissions, urban-level action can directly protect people from the impacts of a hotter world. In Juliet’s home city of Nairobi, frequent flooding has threatened people’s housing and food security and left those living in informal settlements exposed to disease caused by contaminated drinking water.

The city is building resilience with improved water and waste management, and by expanding its green infrastructure to provide cooling, fresh air and recreation.

Action must be both radically ambitious and equitable because the climate crisis is no longer a future concern – it is happening now. Countries, especially those in the Global North, must step up. C40 cities are pioneering the action that governments everywhere can be inspired by.

Youth activists, alongside the rest of civil society, must keep up the pressure on governments at all levels to treat the crisis with the urgency it demands. What we do in the next six months may well determine all of our futures.