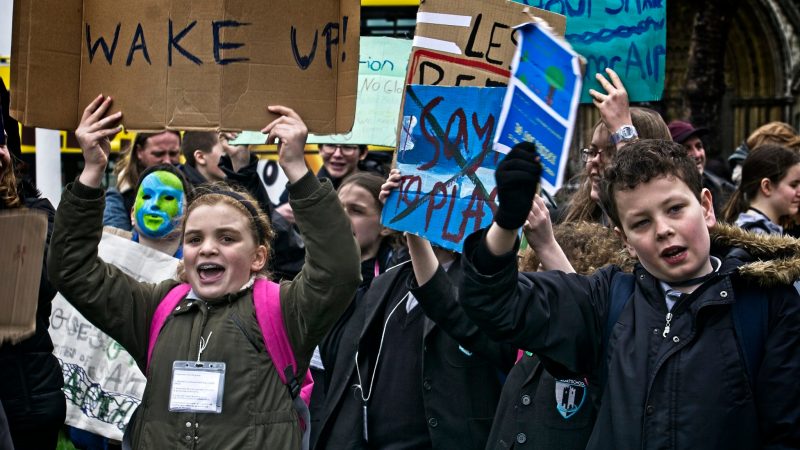 As parents, we always wish for our children’s lives to be better than ours – but without a radical course correction, they will undoubtedly be worse, write Frida Berry Eklund and Yoca-Arditi Rocha. [Garry Knight / Flickr]

Many parents are supporting the children who are school striking for the climate, but are they really listening, ask Frida Berry Eklund and Yoca-Arditi Rocha.

This year has seen an unprecedented rise of a new group of climate warriors – the youth. For the past year, young people have been taking to the streets every Friday to fight for a secure and liveable future.

Inspired by these actions, more than 7.6 million people from 185 countries took to the streets to demand action during the Global Climate Strike of September 20–27.

And on November 29 – just days before world leaders meet in Madrid for the UN global climate summit, COP25 – another Global Climate Strike will take place to give added urgency to negotiations.

All over the world, from Hong Kong to Spain to Chile, frustrated young people are taking it upon themselves to shame governments for the lack of action. Last month saw Extinction Rebellion bring together people of all ages, taking over several bridges and public places in the UK – and other major global cities – demanding that politicians take concrete action to address the climate emergency.

For parents, the climate strikes are both hope-giving and heart-breaking. We are proud of our children who are standing up to big, powerful governments but it breaks our hearts to see our children so desperate for us to listen to the science, that they are stepping out of the classrooms, and into the streets, to make themselves heard.

As parents, we always wish for our children’s lives to be better than ours – but without a radical course correction, they will undoubtedly be worse. The science could not be clearer – we need to limit global temperature rise to less than 1.5 degrees to avoid the worst impacts of climate change.

Recent reports by the IPCC have reiterated the immense pressure on land and oceans due to climate change and increasing temperatures. Four years on from the signing of the historic Paris agreement, almost no countries are even close to being on track to meet their commitments.

To keep temperature rise to below 1.5 degrees, emissions need to drop dramatically year on year from now on, and current climate pledges need to increase five-fold.

We are leaving a planet behind for our kids that is heating up. And if business as usual continues, our children will be living in a world that can’t feed itself, where billions are displaced, where the air we breathe is toxic, the water we drink is contaminated and where wildlife has been all but banished.

Leaving a planet for our children with liveable conditions should not be a partisan issue, it should be a basic human right.

Many parents are supporting the children who are school striking, by being there physically or by celebrating their efforts in social media. The cheering on also extends to decision-makers, many of whom are applauding the efforts of young people.

But are they really listening? In fact, the message from the youth is clear: adults must act to protect their futures. And acting means doing a lot more than cheering. The climate crisis has escalated during our lifetimes and is our responsibility to solve it, not our children’s.

Real action is about being the adult in the room and telling the truth, about using the power that we have to push for change every chance we get: in our own homes; by engaging with friends, family and schools; in our workplaces, businesses and communities; and by pressing our elected politicians to act.

We must use our electoral rights to put pressure on political actors to make brave political decisions to completely decarbonise our economies and reach net-zero greenhouse gas emissions by 2050 at the latest.

As the next wave of strikes takes place on 29 November and 6 December, we must act like real adults and take responsibility for our actions, putting the needs and voices of our children first.

Let’s act to ensure that our children can go back to school. We urge all parents to join us.

2 responses to “The climate crisis is our responsibility, not our children’s”