To prevent climate catastrophe, COP26 must turn promises into actions 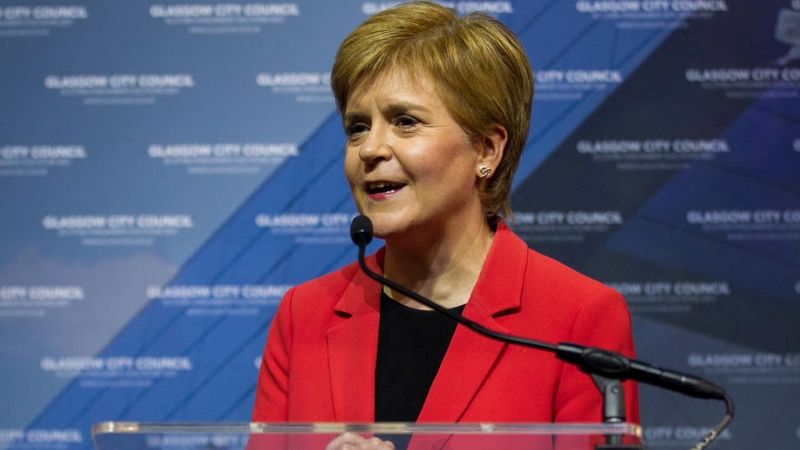 Scotland's First Minister and leader of the Scottish National Party Nicola Sturgeon gives her acceptance speech after being declared the winner of the Glasgow Southside seat at Glasgow counting centre in the Emirates Arena on 7 May 2021. [EPA-EFE/ROBERT PERRY]

For the COP26 climate conference to be a success, world leaders must be willing to deliver concrete action, including honouring their financial commitments to a fair and just climate transition, writes Nicola Sturgeon.

Nicola Sturgeon is the First Minister of Scotland and the leader of the Scottish Nationalist Party.

Next week leaders, delegates, scientists and activists from across the globe will arrive in Scotland for one of the most important gatherings of the 21st century.

The United Nations Climate Change Conference in Glasgow will bring the world together to tackle the biggest crisis we face.

The stakes have never been higher. Climate change and nature loss are the greatest threats to our planet and the impacts are already being felt worldwide including here in Scotland.

Unless we act now, we will continue to see an increase in heatwaves, floods, catastrophic storms and water scarcity – a price that our planet simply cannot afford to pay.

Leaders must come to Glasgow committed to the objectives of the Paris Agreement and ready to turn promises into action. COP26 will only be a success if it delivers the results required to keep the prospect of limiting global warming to 1.5°C alive.

Global climate action requires huge commitments from governments at all levels and of all sizes. As the First Minister of Scotland, I am determined to play my part and to support other leaders to do so too.

It is important to recognise that countries like ours, with rich industrial pasts, have a special responsibility. We have disproportionately contributed to climate change, so we must do more to help tackle it.

That is why in Scotland, we were one of the first nations to declare a climate emergency. We have decarbonised faster than any G20 country, more than halving our emissions from 1990 levels, and by 2030 we aim to halve them again – all on route to becoming Net Zero by 2045.

We have funded the restoration of around 30,000 hectares of peatland and have created more than 32,000 hectares of new woodland. And last year the equivalent of 96% of the electricity we consumed came from renewable sources.

However, being proud of our progress so far does not mean ignoring the scale of the challenge that remains. Ending our contribution to climate change within a generation will require transformational change across all parts of the economy and society.

The leadership and action of small countries can make a big difference.

As the European co-chair of the Under2 Coalition – bringing together over 200 states, regions and countries like ourselves, representing almost two billion people – Scotland is encouraging others to sign up to ambitious emission reduction targets.

Brittany in France, Baden-Württemberg in Germany and Lombardy in Italy are just a few of the growing number of European members.

Last week we launched a new set of commitments for members of the group bringing them firmly into line with the Paris agreement and calling for further action to be taken.

Of course, demonstrating ambition alone is not enough. If we are to successfully respond to the global climate emergency, we must continue to learn from one another and agree shared actions.

We know the impacts of climate change are not felt equally.

Agreeing to limit emissions does not go far enough. To deliver the fair and just outcome we all need world leaders must also deliver on the financial commitments required to enable countries to adapt, to mitigate, to introduce new clean technology and to address the loss and damage caused by the climate crisis.

Climate Justice and a Just Transition must be central to the outcome in Glasgow.

Future generations have a right to a more equal, just and fair future that leaves no one behind. Not only have children and young people played a significant role in getting climate change on the international agenda, but they will also face the greatest impacts of climate change over their lifetimes.

We are supporting opportunities for children and young people from Scotland and beyond to ensure their voices are heard by hosting the UN’s official youth event for COP26, the Conference of Youth.

There is no guarantee that COP26 will deliver the results that all of us are counting on but if world leaders come to Scotland willing to grasp the opportunity on offer they can turn ambition into action and bring us all one step closer to securing the future of our planet.