Turkey’s 2021 wildfires are part of a wider environmental failure 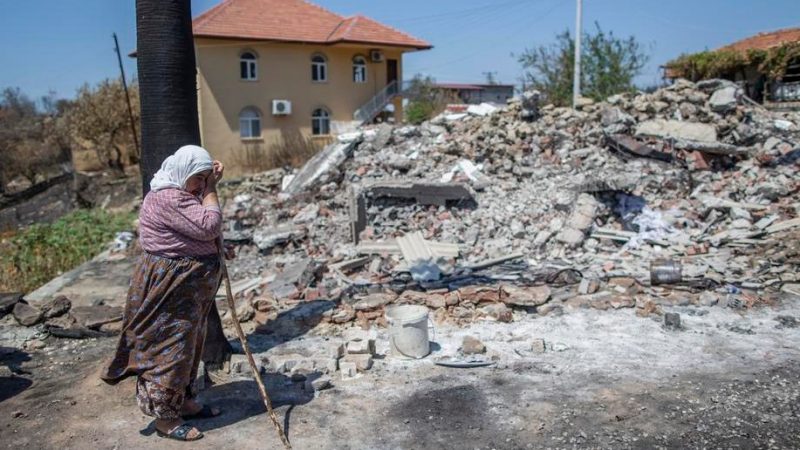 Cemile Gullu cries in front of the burned remains of her house after a wildfire at the Bucak village of the Manavgat district in Antalya, Turkey, 10 August 2021 [ERDEM SAHIN / EPA-EFE]

Wildfires have occurred in Turkey for thousands of years, but the amount of land destroyed increased significantly in 2021, an embarrassing situation for the government which decided to impose penalties on media outlets that did not appear sympathetic to its position, writes Alexandra de Cramer.

Alexandra de Cramer is a journalist based in Istanbul. She reported on the Arab Spring from Beirut as a Middle East correspondent for Milliyet newspaper. Her work ranges from current affairs to culture and has been featured in Monocle, Courier Magazine, Maison Française and Istanbul Art News.

Turkey has had, literally, a test by fire this summer. Along the southern coast of Anatolia, over 270 forest fires tore through 53 provinces. Nine people died.

The ferociousness of this year’s conflagration – the worst ever – came down to one thing: ineptitude. Ineptitude in understanding the scale of climate change, and in response to environmental calamity. The fires are symptomatic of Turkey’s environmental failure.

But a 30% increase in aridity and record-breaking temperatures this year have intensified the damage. A record 1,600 square kilometres of forest were lost to fire, showing something altogether different was happening this year. Such is the accelerating pace of climate change.

Still, such effects can be mitigated. For example, by better tree planting under the country’s very own reforestation program. But such a decision would have to go through Turkey’s forestry department, the agency in charge of stewardship of the country’s land bank. And that’s where the problem begins.

The department allocated 193 million Turkish lira in its budget this year for firefighting. That’s roughly $22 million in today’s (much depressed) exchange rate. However, it spent only 3.4 million lira on fire mitigation projects and equipment in the first half of the year.

So when fire descended on the town of Manavgat in Antalya province, Turkey was able to deploy only two firefighting aircraft. The country has a total of three such working planes. Other aircraft owned by the Turkish Aeronautical Association were deemed “old and not usable” and were not permitted to join the fight.

The government seemed to think it could banish the fires by an exertion of will. On 2 August, the radio and television regulator warned TV stations not to give as much coverage to ongoing fires as they did to the successes in extinguishing forest burns. It threatened penalties for those that failed to do so.

The following week, six stations, including HaberTurk and Fox News, were fined. Media outlets sympathetic to the government’s position, however, duly focused on areas where firefighting was more successful. This led many celebrities, such as the comedian and actor Sahan Gokbahar, to travel to areas with ongoing fires and report on them through social media.

In the face of a lack of government action, ordinary Turks took it upon themselves to organise a global call for help. The hashtag HelpTurkey went viral. The government, however, saw this as an attempt to undermine the administration.

One official said it made Turkey look “weak,” and began a counter-campaign with the hashtags WeDontNeedHelp and StrongTurkey. An investigation was launched into social media accounts that shared the hashtag HelpTurkey, accusing the owners of spreading “anxiety and fear.”

If all of this weren’t so tragic, it would have been laughable. What is one, after all, to make of the president, Recep Tayyip Erdogan, tossing bags of tea to disaster victims from a moving vehicle?

Speculations currently are circulating that the fires were started by arsonists. The mayor of Antalya, who is also the head of the province of the same name, recently voiced such suspicions. So has the presidential communications director, Fahrettin Altun (the same one who said pleas for international help made Turkey look weak), who swore that investigations would be launched.

But if precedents are anything to go by, they won’t amount to much. Although Turkey, in fact, offers protection to its forests in its constitution, noting that “forested areas that burn down can under no circumstances be zoned for construction and must therefore be reforested,” in too many cases the scorched land is replaced with real estate.

The simple fact is that larger and more frequent forest fires must be expected. Turkey’s government has never been known to be populated by “tree huggers” and that isn’t about to change.

But while it is bad enough to do nothing – Turkey is one of six countries, and the only one of the G20, yet to ratify the Paris Agreement on climate change – it is another thing to be aiding the rapid march of disaster.

Thousands of hectares of forests have been cut down to make way for mining, airports and other projects. In mid-August, several residents in the city of Mugla were arrested for trying to save trees that were being felled by a mining company.

And if fires weren’t bad enough, the Sea of Marmara has been plagued this summer by “sea snot.”

Sea snot is as disgusting as it sounds: the actual mucus secretion of an overabundance of phytoplankton that feed on uncontrolled fertiliser run-offs. On land and in the sea, the government’s mismanagement of the environment, its stewardship of nature, will have repercussions for many generations to come.