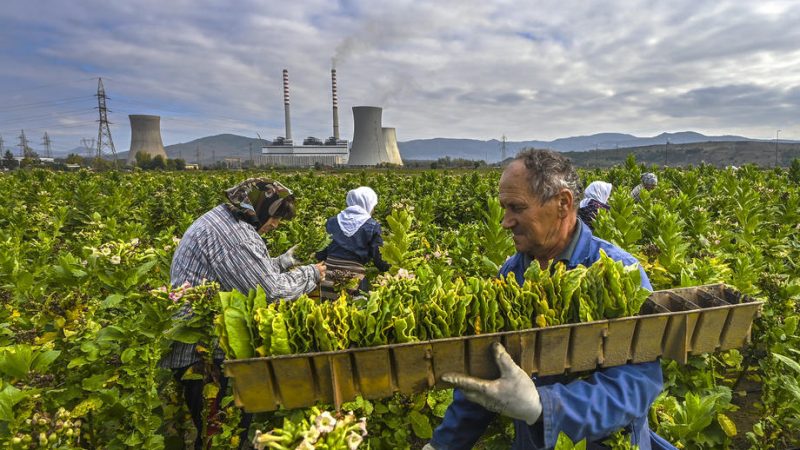 Agricultural workers harvest Oriental tobacco leaves in a tobacco field in front of the biggest thermal power station in the country, 'REK BITOLA', near the city of Bitola, North Macedonia, 19 October 2021. Installed since the 1950s, the main energy systems in Serbia, Bosnia and Herzegovina, North Macedonia, Kosovo and Montenegro are based on coal, an abundant raw material in the region. [EPA-EFE/Georgi Licovski]

The EU must step up action to insist that Western Balkan countries bring down their pollution and comply with emission requirements, write MEPs Petros Kokkalis and Viola von Cramon-Taubadel. They also propose instruments to achieve this goal.

As echoes of the COP26 in Glasgow are fading, some of the EU’s aspiring countries fail to comply with air pollution standards from their coal power plants, let alone cut the lifelines for coal and embark on a decarbonisation path. Western Balkan coal power plants are the EU’s blind spot.

The five Western Balkan countries which rely on coal for their electricity may not rank high in global CO2 absolute emissions. Still, when it comes to air pollution and its impacts in the region itself and the EU, the picture is completely different. In 2020, 18 coal-fired power plants in the Western Balkans emitted 2.5 times as much sulphur dioxide as the entire EU fleet of 221 plants.

At least 19,000 deaths are estimated to have occurred due to air pollution from coal power plants in the Western Balkans between 2018-2020, and 12,000 of these were due to breaches of the Large Combustion Plants Directive. This piece of legislation has already been superseded twice in the EU to enforce more stringent limits, but it only entered into force in the Western Balkans in 2018. Coal plants that comply with the Large Combustion Plants Directive still have health impacts, but those that do not unnecessarily increase ill health and premature deaths.

More than half of these preventable deaths took place in the EU, which imports 8% of the electricity produced by these heavily polluting plants. The most affected EU countries were Italy, Hungary, Romania, Greece, Bulgaria and Croatia. Thus, the EU both takes advantage of the cheap electricity generated by the plants and pays significant health costs.

The EU’s imports of electricity from the Western Balkans make up a tiny 0.3% of the EU’s total electricity consumption. Still, the SO2 pollution associated with these imports is half of the total SO2 emissions from all power plants in the EU in 2020. This is because power generation in the Western Balkans is around 300 times more SO2-intensive than in the EU.

That the Western Balkan countries should have prepared for the implementation of the Large Combustion Plants Directive since 2005 when they joined the Energy Community Treaty, is one thing, but that the EU is taking very little action to discourage such flagrant non-compliance is really a matter of urgency – a public health and environmental emergency.

As representatives of EU citizens, we believe the EU must step up action to insist that the countries bring down their pollution and comply with the emission requirements. The current dispute settlement mechanism of the Energy Community Treaty is by no means a strong enough tool to bring the countries into compliance.

2020 was the third year of breaches in a row. The countries know that they will not suffer proportionate and dissuasive consequences, such as financial penalties, which in the EU have been proven to work. Therefore, strengthening the Energy Community Treaty is of utmost importance. It has proven to be a crucial instrument in advancing the application of EU law in the energy sector in the Contracting Parties, and we have recently written to the EU Commissioner for Energy to urge ramping up its enforcement.

Failing to narrow the gap in pollution control and overall climate goals between the EU and its immediate neighbours risks eroding the ambition and eventually the credibility of the block, something which we must avoid.