What the SPD’s victory means for Germany’s climate leadership 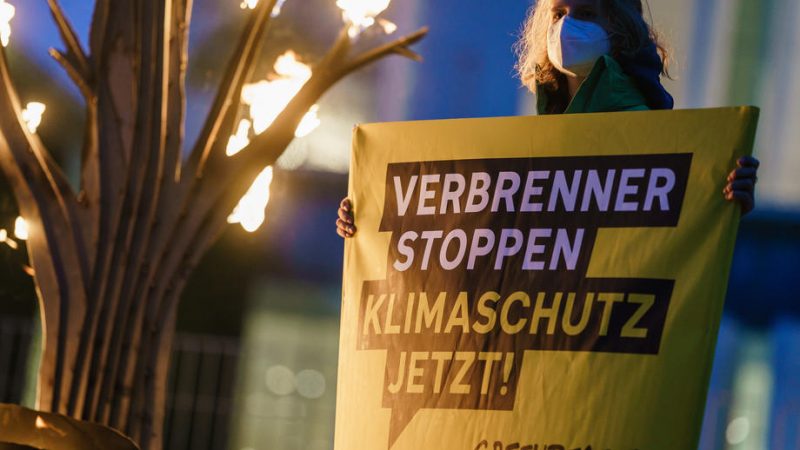 An activist of the environmental organization Greenpeace holds a banner reading 'stop combustion engines - climate protection now' during a staged protest next to a tree with burning branches in front of the chancellery in Berlin, Germany, 18 August 2021. [EPA-EFE/CLEMENS BILAN]

What does the end of the conservative rule in Germany and the departure of Angela Merkel, “the Climate Chancellor”, mean for German climate leadership, a part of the country’s national brand during the Merkel era? Isabel Schatzschneider explains.

Isabel Schatzschneider is an environmental activist and researcher specialising in food ethics, religious ethics and animal welfare. She is currently working as a research associate at the Friedrich-Alexander University, Erlangen-Nüremberg.

On Sunday night, it became clear that Germany’s governing Christian Democrats (CDU) had lost their 16-year stronghold to the narrowly victorious Social Democrats (SPD). The historic election saw a tight race between Armin Laschet, Merkel’s official successor at the CDU, and SPD’s Olaf Scholz, the finance minister and current vice-chancellor.

Yet, Laschet was not able to hold onto Merkel’s voter base. Merkel, the scientist-turned politician, had managed to mobilise Germans who wouldn’t otherwise vote for CDU. Laschet’s ratings had been steadily falling after he was seen laughing at an event remembering flood victims. Whilst Laschet’s popularity was decreasing, Scholz’s ratings were going up.

Scholz acted quickly by promising emergency aid for flood-devastated areas and emerged as a winner from all TV debates. Already an important Parliamentary figure, Scholz became a symbol of continuity.

Although SPD secured a narrow victory over CDU, it may take weeks before the make-up for the Bundestag is known. Until SPD or CDU/CSU is able to form a majority, it is impossible to know for certain who will become the next Chancellor.

But what does the election result and the departure of Merkel, “the Climate Chancellor”, mean for German climate leadership, a part of the country’s national brand during the Merkel era?

With her pragmatic leadership style, Merkel placed environmental issues at the core of German political debate, urging other parties to assess their green credentials. Nonetheless, that did not convince those critics doubting whether she lived up to her nickname.

It seemed like Merkel had been more successful with her climate agenda internationally than at home. In Germany, she was forced to balance between competing interests from influential car and coal sectors

While Merkel’s scientific approach had been credited as a part of her success from hosting the first COP climate summit to leading Germany’s COVID-19 response, Germany’s reliance on fossil fuels became her blind spot.

CDU was accused of having a close relationship with the German automotive sector, dubbed as its Achilles heel. Merkel and her party faced critique for turning a blind eye to fossil fuels’ negative environmental impacts whilst focusing on their economic benefits for the leading export industry.

In an attempt to halve carbon emissions, Merkel declared that the German car industry will be a central part of the solution to the climate crisis and that the country plans to increase electric car charging points to 1 million by 2030.

But Germans did not share Merkel’s excitement: A survey in 22 countries found Germans to be the least optimistic about the viability of electric cars. Despite the government’s efforts to boost the electric vehicle industry, the take-up in Germany lacks behind Norway, Sweden and Netherlands.

Recently, the green potential of electric cars has been questioned due to the battery manufacturing process which causes significant carbon emissions. Electric cars may not offer a perfect solution for the transport sector, but when combined with the deployment of renewables like biofuels, they can reduce CO2 emissions.

Biofuels have the potential to offer a renewable alternative to the overreliance on fossil fuels. This would greatly benefit the German transport sector, the only industry that has not been able to reduce carbon emissions since 1990. Yet, the European Union has inadvertently slowed this process.

Back in 2018, the EU implemented a ban on palm oil for biofuels citing environmental concerns, notably deforestation. Yet the evidence shows that palm oil provides the highest yield per acre compared to other oilseed crops – up to 9 times more than rapeseed, soybean and sunflower.

Since the European rapeseed dominates the biofuels market, critics labelled this as a protectionist move to promote the EU’s domestic biofuels industry. The reality is that, if produced sustainably, palm oil could triumph over alternative biofuels.

Recently, the leading palm oil producers revealed their plans to transition to net-zero emissions, a step towards greater sustainability in the sector.

In Malaysia, these investments have led to positive results: the Southeast Asian country has certified around 90% of its palm oil under the Malaysian Sustainable Palm Oil (MSPO) scheme. Over the past four years, Malaysia has seen a steady decline in deforestation levels, likely attributable to its legally binding MSPO scheme and the government issuing sanctions for non-compliance.

The transition to a greener transport sector will be challenging for Germany, but it would be foolish to ignore the power of the automotive sector over the German electorate. Germans’ love for cars divided the public, slowing down the Greens despite their lead in the polls back in April. The automotive sector employs every 50th German and the switch to electric cars is feared to create unemployment.

There is a clear gap between green ideas and how Germans think, which may explain why the Greens’ Annalena Baerbock failed to fully capitalise on the climate crisis, ending up alienating some voters with her ambitious climate plan.

After July’s devastating floods in Western Germany, climate change has remained at the centre of the Chancellor race, remaining as Germans’ key concern. Moreover, scientists pointed out the link between climate change and floods, warning about a greater likelihood of natural disasters on European soil.

The Greens may not have secured a victory, but they are likely to enter the Bundestag as a part of a coalition and the SPD has already declared their interest in an alliance. The next government will consist of a power-sharing deal, one that will undoubtedly shape German climate leadership.