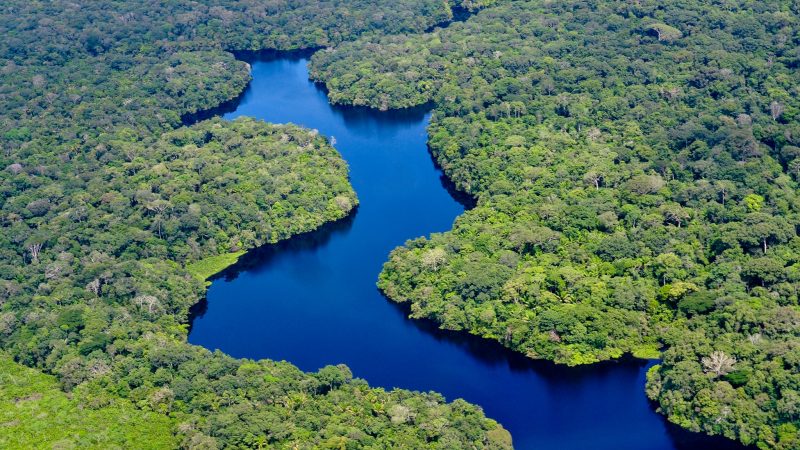 Norway has been steadily losing forest cover since 2017, yet it acts as if this is only an issue in the developing world, writes Muhammed Magassy. [CIFOR / Flickr]

Norway’s investment of billions in fighting overseas deforestation follows the West’s hypocritical relationship with climate change, once again shifting the blame on developing nations whilst diverting attention away from the West’s culpability in environmental destruction, writes Muhammed Magassy.

Muhammed Magassy has been a member of the Gambian National Assembly since 2012. He is also a member of Parliament for ECOWAS, the Economic Community of West African States.

Many see Norway as the epitome of global climate leadership: A wealthy Scandinavian country donating billions to support the developing world to reach climate targets.

That said, this polished image couldn’t be further from the truth. Norway’s objectives are motivated by a vested interest and is another glaring example of Western hypocrisy to shift the blame for climate change to less developed nations.

Recently Norway announced its intentions to invest around $200 million into curbing deforestation abroad – a funding initiative that spans over several years including financial subsidies for 39 organisations under Norway’s International Climate and Forest Initiative (NICFI).

The funding will be allocated by the Norwegian Agency for Development Cooperation (Norad) which manages notable parts of the initiative’s funds on behalf of the Norwegian Ministry of Climate and Environment.

Since 2008 Norway has poured up to $330 million per year into different initiatives in the name of protecting the world’s rainforests.

However, it would be detrimental to assume these are simply acts of altruism.

The hypocrisy of the second richest country in the world is blatant – Tesla-loving Norwegians have literally earned their wealth from Arctic drilling, which threatens the vulnerable ecosystem and continues the West’s fossil fuel addiction.

Norway’s double standards around deforestation at home and abroad are also startling. The country has been steadily losing forest cover since 2017. That said, Norway acts as if this is only an issue in the developing world.

But why is Norway imposing restrictions overseas but not at home? Is this simply diverting attention away from Norway’s own culpability to climate change and destruction in the Arctic?

By no means is this a new phenomenon by Norway or the West. For long, the burden of climate change has been shifted to the developing world for attempting to lift itself out of poverty. The West has created an economic trap by kicking away the ladder it used to climb up to prosperity.

Suddenly developing nations are the ones expected to do all the heavy lifting for making their own industries more sustainable whilst the West enjoys fossil fuel revenues. Looking at Norway’s most recent investments to curb deforestation abroad, it smells like a PR stunt.

Not least because where the funds have ended up is suggestive of a lack of due diligence:

For example, one source of Norway’s money has been Brazil. For over a decade the Amazon Fund has been the biggest recipient of Norway’s climate funds with $1.2 billion poured into it.

Since Brazil’s right-wing President Jair Bolsonaro came to power in 2019, these investments have literally been going up in smoke. The destruction of the Brazilian Amazon has surged with the world’s largest rainforest turning from a carbon sink into a carbon source.

Whilst the payments to Brazil were suspended later after public criticism of Bolsonaro’s government, I cannot help but to wonder how much of this money burnt to ashes along with the Amazon.

It’s also widely known that illegal deforestation is rampant within the Brazilian beef and soy industries. Last year a study revealed that around a fifth of Brazil’s soy and beef exports to the European Union come from illegally deforested land.

The West can no longer ignore its active role in contributing to the demolition of the Amazon nor the Brazilian government’s refusal to take action with Bolsonaro himself declaring the Amazon open for business. In the light of the EU-Mercosur free trade agreement, the EU’s message is loud and clear: Profit before the environment.

Crucially, whilst deforestation has increased both in Brazil and globally, certain regions have witnessed an opposite trend. In Malaysia for example, palm oil producers have implemented national certification schemes to ensure palm oil is no longer produced at the expense of rainforests.

In fact, the Malaysian government has made the Malaysian Sustainable Palm Oil (MSPO) certification mandatory since 2020. Thanks to these government efforts, Malaysia has seen a rapid decline in deforestation rates since 2017.

As the example of Brazil shows, national legislation alone without the government’s will to enforce it, won’t be saving the world’s rainforests.

The reason why the MSPO scheme has yielded results is that the Malaysian government issues sanctions and penalties for non-compliance: not only does the scheme reward farmers with zero deforestation but there are also negative ramifications for producers who fail to do so.

If the West truly wants to halt overseas deforestation, it must start by supporting initiatives with proven results backed by national governments but also admit its own complicity in the destruction of the world’s forests. Otherwise, funding initiatives by Western countries like Norway are only clearing their own conscience.

A recent United Nations Intergovernmental Panel on Climate Change (IPCC) report declared “a code red for humanity”. Only two months until the critical COP26 Summit in Glasgow, this is the last chance for Western countries to turn empty commitments into actions.

Till then, I’m not convinced that Norway’s or the West’s motivations for tackling climate change are sincere – but rather for show.