EU leaders to back carbon neutrality ‘by 2050’, come up short on final deal 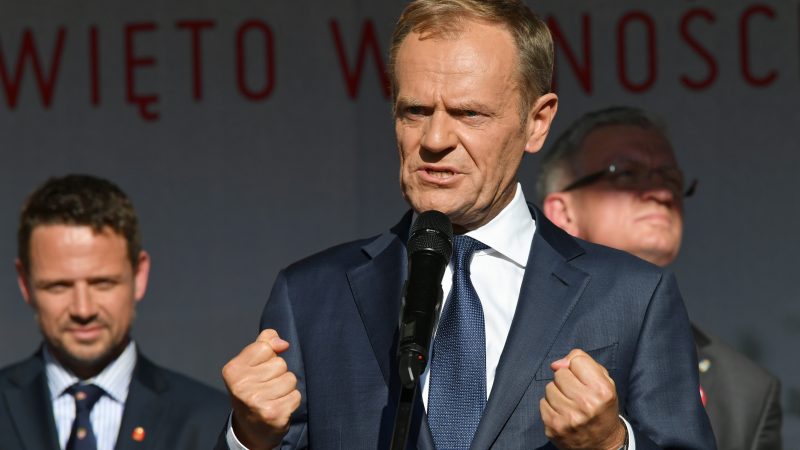 President of the European Council Donald Tusk during a rally in Gdansk, Poland, 4 June 2019. [Photo: EPA-EFE/ADAM WARZAWA POLAND OUT]

Updates with Austria’s decision to back the 2050 target

The European Council is set to agree on Thursday (20 June) that the EU economy should be carbon neutral by 2050, according to the latest batch of draft conclusions. However, leaders will bide their time and hold off on finalising an agreement until “early 2020”.

All 28 member states could now be on board with the idea that the EU should be absorbing all the emissions it creates by 2050 at the latest. In recent days, more and more countries signalled their support for a ‘net-zero’ strategy first proposed by the European Commission.

Doubts still remain about whether all countries will support the explicit mention of a 2050 deadline or if a few remaining hold-outs will continue to pursue vaguer language related to “mid-century” or the complete omission of a date altogether.

According to documents seen by EURACTIV, Austria still wanted softer language on the deadline and proposed “mid-century”. But during her arrival at the Council, interim-Chancellor Brigitte Bierlein said a compromise had been found and Austria is now back on board.

Earlier this week, draft conclusions for Thursday’s summit lacked mention of 2050 altogether and the Council meeting looked destined to be a disappointing one for climate campaigners. The latest copy of conclusions shows that things have changed.

Those hoping for a done-and-dusted agreement this week are set to be disappointed regardless though, as member states are on course to stick with a timeframe that targets adoption of the strategy “in early 2020”.

Late, for an important date

A mention of the 2050 date has made it into the recent draft thanks to more detail being added on funding, incentives and making sure the energy transition is socially just.

Work will now continue “on the conditions, the incentives and the enabling framework to be put in place, in order to determine how to ensure a transition to a climate-neutral EU by 2050 that will preserve European competitiveness, be just and socially balanced”.

A source in the Council told EURACTIV that “some member states needed more assurances on this”, in what is likely a reference to the Czech Republic and Poland, two of the main member states that have yet to publicly support the net-zero ethos.

Croatia, Estonia, Lithuania and Romania have also refrained from officially declaring their backing, although the latter has remained neutral on the issue for six months during its chairing of the rotating EU presidency.

The latest conclusions also retain a strong reference to a UN summit in September, where signatories to the Paris Agreement are expected to make new emission-cutting pledges.

Although the bloc looks set to go without a final deal, representatives will be able to point to the clear pathway that is due to be adopted tomorrow.

A high-ranking Commission official said that the EU’s pitch to its international partners would also focus on the laws that confirm its climate targets, the extensive enabling framework and its “just and socially balanced solutions”.

Securing support for 2050 is also due to the inclusion of a sentence that says the shift to net-zero will be done by “building on the measures already agreed to achieve the 2030 reduction target”.

Some member states are against tweaking the existing rules and targets, as is Commission President Jean-Claude Juncker. Unanimous agreement would be needed to change them.

The 2030 target is currently set at 40% cuts compared with 1990 levels but the EU has faced calls from numerous groups to increase the goal. Advocates include the European Parliament and UN Secretary-General Antonio Guterres, and both say it should be 55%.

“The next crucial step will be to agree on a plan to substantially increase the EU’s 2030 targets, as it is emission cuts by 2030 that will make or break the EU’s response to the climate crisis,” said Climate Action Network Europe Director Wendel Trio.

According to data from the Commission, current laws if fully implemented could yield cuts of 45%. But a stock-take of current commitments this week warned that the EU is only on track to achieve its current goal the way things stand.

One response to “EU leaders to back carbon neutrality ‘by 2050’, come up short on final deal”