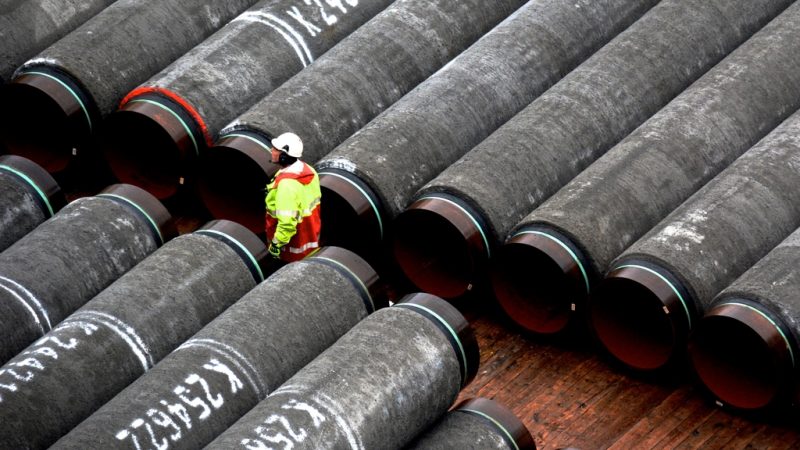 Nearly all hydrogen in Europe today comes from natural gas steam methane reforming, a process which releases CO2 unless it is coupled with costly carbon capture and storage (CCS) to bury the emissions underground. [Equinor / Eva Sleire]

While the European Commission reckons electricity will form the “backbone” of Europe’s low-carbon energy system in 2050, it still has a lot of catching up to do. Only 20% of Europe’s energy needs are currently met by electricity, with renewable sources making just 7% of final EU energy consumption, according to the IEA.

And although wind and solar power are growing fast, low-carbon gases such as hydrogen “can fill the electrification gap” by covering the needs of heavy industries, said Timm Kehler from Zukunft ERDGAS, an initiative from the German natural gas industry.

“There is a limit to electrification,” Kehler warned, saying hydrogen from natural gas “can offer decarbonisation at very low cost” for industrial sectors like steelmaking, cement and chemicals, which cannot be electrified.

Nearly all hydrogen used in Europe today comes from natural gas obtained from a process called steam methane reforming. But while that process is cost-competitive, it also releases CO2 unless it is coupled with costly carbon capture and storage (CCS) technology to bury the emissions underground.

An environmentally-friendly way of producing hydrogen is via water electrolysis, which uses renewable electricity as the energy source to split the water molecule. The downside is the high cost of electrolysers and the energy losses when converting electricity into hydrogen.

Now, researchers say they have developed an alternative route, called pyrolysis, which they claim addresses cost issues because it doesn’t rely on CCS to mitigate carbon emissions.

“Is it possible to use hydrocarbons without producing CO2? When I asked this question 3-4 years ago, people thought it was impossible,” said Alberto Abánades from the Polytechnic University of Madrid.

“Now, we can do that,” he told Brussels-based reporters on Friday (21 June).

Under a tried and tested process called pyrolysis, natural gas is heated up to high temperatures in order to generate hydrogen. And the only residue left is carbon in a solid form – rather than in the gaseous form which is the main cause of global warming.

“We substitute the production of CO2 with the production of carbon,” Abánades explained, saying graphitic carbon is a “very noble material” used for example in steelmaking or the manufacturing of batteries used in electric cars.

Hydrogen, “the key to deep decarbonisation”

Green hydrogen is a 100% carbon-free source of energy which is widely seen as a central piece of Europe’s future low-carbon energy mix. In a long-term climate and energy strategy for 2050, the European Commission said hydrogen and other low-carbon gases will be essential to cut emissions from industrial sectors which cannot be electrified.

The question is where the hydrogen comes from, and whether it can be produced in large quantities without emitting greenhouse gases responsible for global warming.

While “green hydrogen” made from renewable electricity is considered clean, “blue hydrogen” made from fossil gas with carbon sequestration is resisted by environmentalists who point to the risk of methane slippage during gas drilling operations. “Grey hydrogen,” meanwhile, is considered the dirtiest because it comes from splitting natural gas, a process which releases CO2.

But hydrogen from pyrolysis has so far not been taken into account in future energy modelling scenarios, Abánades said.

This task was undertaken recently by Pöyry, a consultancy firm. Their study, published in June, sees hydrogen from natural gas as “the key to deep decarbonisation” of the economy, providing a practical option in areas like industrial process heat, heavy road transport or waterborne transport, which are difficult or impossible to electrify.

“It has become increasingly evident that hydrogen will be an integral part of the solution” to decarbonise the economy, Kehler said. “We need a clear target for green gas that includes hydrogen from natural gas, renewable gas from electrolysis as well as biogas,” he said in a statement.

Pyrolysis has key advantages, the Pöyry study says. It is “cheaper and more scalable than electrolysis and overcomes many of the barriers associated with widespread deployment of CCS,” which is necessary for the production of zero-carbon hydrogen from natural gas.

Abánades said the cost of pyrolysis currently stands around €2 or €3 per kilo of hydrogen produced, or “a little bit higher than steam methane reforming,” which is the technique most commonly used to produce “grey” hydrogen.

However, pyrolysis becomes cheaper if the costs of CCS are taken into account, Abánades said. And costs are expected to go down further as soon as the technology is deployed on a commercial scale, he added.

A key downside is that the overall costs of hydrogen pyrolysis are heavily dependent on the price of natural gas, most of which is currently imported in Europe from places like Norway and Russia. In fact, Norway’s Equinor and Russia’s Gazprom are among the supporters of Zukunft ERDGAS, green activists point out, saying this raises questions about the organisation’s motives.

Environmentalists also warned about the carbon neutrality claims of hydrogen production from pyrolysis, saying what matters most is the actual emissions reductions the technology can bring.

“If it’s carbon neutral, we’ll support it,” said one green campaigner. The most important, the source added, is that carbon reductions are properly measured and verified.

Others are more critical. “The gas industry tries everything it can to paint its old recipes in green and to claim a role in a carbon neutral world,” said Antoine Simon, a campaigner at Friends of the Earth Europe.

“It should however not fool anyone,” he added. “This promotion of different forms of fossil gas-based hydrogen look more like a ploy for the fossil gas industry to buy some time with promises of costly and energy intensive technologies and continue in the meantime their business-as-usual,” Simon said.

“Hydrogen certainly does have a role to play in a low-carbon future,” Simon said, “especially for sectors which cannot be electrified. But considering the current climate crisis, we have only time for no-regret and truly sustainable options such as hydrogen made from green electricity,” he insisted.

Still, “pyrolysis can be a cost-effective and scalable solution to hydrogen production,” the Pöyry study claims, saying the technology also mitigates the risk that widespread CCS might not be deployed at scale in a sufficiently short timeframe.

Another upside is the solid carbon that results from the pyrolysis process.

“A new economy could come out from the availability of cheap and very pure carbon,” the Spanish researcher said, adding this could bring about a “new industrial revolution” while making natural gas “part of the circular economy.”

CORRECTION: The cost of pyrolysis currently stands around €2 or €3 per kilo of hydrogen produced, not €1.2 or €1.3, as previously reported. This article was updated accordingly on 26 June 2019.