The 15-point proposal, presented in Berlin on Monday (15 May), is intended for the German climate protection law, which the Federal Government aims to adopt by the end of the year. It was submitted by think tanks Agora Energiewende (energy transition) and Agora Verkehrswende (transport transition).

Key highlights include a carbon price for heating oil, natural gas and fuels, as well as far-reaching investments in the transport sector and renewable energies.

By the end of this month, various ministers will propose their own measures to implement German climate targets for 2030 as part of the planned law. This timeline was agreed by the climate cabinet, created by Chancellor Angela Merkel earlier this year, which brings together ministers with key responsibilities touching climate issues.

According to the two think tanks, their proposal contains measures that can be implemented swiftly, before the end of the year.

“This year, it will be decided whether Germany can achieve its legally binding climate targets for 2030. To achieve this, Germany must reduce its emissions by 25 million tonnes of CO2 per year,” said Patrick Graichen, director of Agora Energiewende.

Germany’s average carbon reduction currently hovers around 10 million tons of CO2 per year, meaning it must double its efforts to reach that goal.

The country is set to fall short of its national climate targets for 2020. If it does not meet its 2030 objective, Agora Energiewende estimates that fines as high as €60 billion could have to be paid. 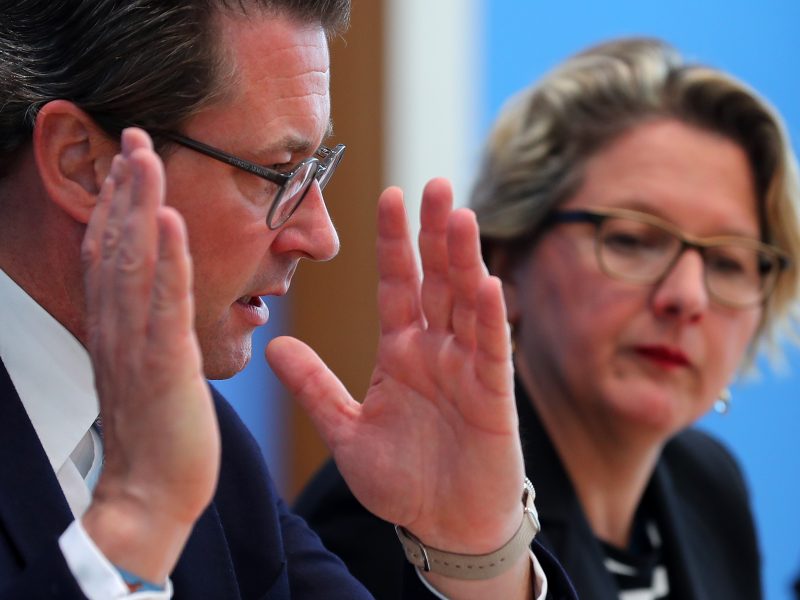 To meet 2030 objectives, the two think tanks say more radical solutions need to be implemented, including the adoption of mandatory CO2 reduction targets for select sectors of the economy. These do not look too far off: Environment Minister Svenja Schulze (SPD) has already called for such an approach in the climate protection law.

According to the proposal, a ministry whose sector overshoots its CO2 target would have to cover fines from its own budget. The most problematic is the transport sector, where emissions have stagnated since the 1990s.

“We cannot hope for different sectors to exceed their targets. This means that commitments can be flexible within sectors, but without a framework, it will not work,” Graichen said at the press conference.

A reward-sanction system for car purchasers

As concrete measures, the two think tanks support a price of €50 per ton of CO2 for sectors which are not covered by the EU Emission Trading Scheme (EU ETS).

This would make petrol, diesel, heating oil and natural gas more expensive. So to relieve consumers, they suggest reducing the electricity tax at the same time, and redistributing the remaining revenues to citizens as a climate premium.

This model has been tested before in Switzerland where similar measures have been put in place since 2008. It includes a hardship provision for the most vulnerable groups, such as commuters with low incomes.

Critics of a national carbon price have instead called for the EU ETS to be expanded to sectors beyond power generation and heavy industries. But for now, there is no consensus at EU level to widen the scope of the ETS to sectors like transport or agriculture, which are covered by separate climate laws.

“For the expansion of the EU ETS, Western and Northern European member states need to at least form an alliance – but this would be a very long process and we do not have time for this,” said Graichen, the head of Agora Energiewende.

“The call for a common carbon price at EU level or within the G20 is a good strategy so that nothing happens,” he warned.

To drive forward the energy transition in Germany, the two think tanks call for a strong expansion of renewable energies – a doubling of new solar energy installations to five gigawatts per year and new onshore wind projects to the tune of four gigawatts per year. All while keeping with the government’s promise to phase out coal by 2038, as planned by the German Coal Commission.

Major efforts also have to be made in the transport sector. “We need a mobility transition, not just a power transition,” Graichen said.

To achieve this, he suggests putting in place a system of incentives and price increases to change consumer behaviour. Drivers could for example receive a premium when buying a new car that emits less than 95 grams of CO2 per kilometre, which is the EU objective. A bonus of €5,000 could also be offered to buyers of electric vehicles.

To complement the promotion of e-cars, cities and municipalities could also receive additional money to promote local public transport so that it becomes cheaper.

Carbon tax has featured prominently during the EU election campaign. The key issue is whether poorer households will be expected to pay a CO2 tax, when they emit less than high earners. In an interview with EURACTIV Germany, two climate scientists discuss climate change affecting the class system and consumer behaviour.

The path towards a hydrogen-based economy

To pave the way for a carbon-neutral economy, the two think tanks call for a €500 million fund to finance CO2-free technologies in the industry. In addition, gas traders should add minimum quotas of hydrogen to gas mixes from 2021 onwards to ensure hydrogen levels in the mix reach 10% at least by 2030.

However, climate-neutral production of hydrogen is still controversial: Although it is suitable for energy storage, heating and transport, its production is still significantly more expensive than fossil fuels.

For the building sector, both think tanks are calling for increased tax incentives for energy-efficient renovation from 2020 onwards. Although the German government has included this proposal in the coalition agreement, the necessary financing still does not appear in the budget planning of Finance Minister Olaf Scholz (SPD) for the coming year.

If Germany were to implement the 15-key point plan this year, Germany could reach climate protection goals by 2030 by reducing its emissions by the necessary three quarters, according to Graichen.

But this alone would not be enough because agriculture and air travel would need to make further contributions.