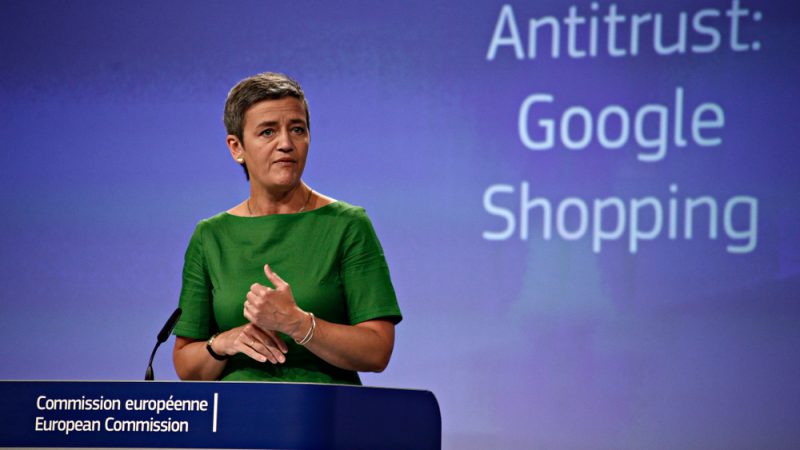 This case closed a decade-long saga between Brussels and the tech giant.

Google’s online shopping and its Android platform for mobiles were already subject to fines in June 2017 and July 2018, respectively.

This latest case affected its AdSense service, which helps third-party websites to generate revenues by including ads, triggered by Google’s search tool. Google retains a substantial part of the revenues created.

Google’s total bill with Brussels has reached €8.25 billion, for abusing its dominant position to exclude rivals over the past years.

But the company is not off the hook, as the Commission is still looking into the search market for jobs and for local businesses.

The EU executive concluded that Google had introduced clauses in contracts signed with more than 200 websites that excluded rivals to negotiate their advertising space with other advertising brokers.

Since the service was launched in 2006, the US-based firm imposed exclusivity by contract. Although this requirement was removed in 2009, Google set other “restrictions”, including a number of Google ads that had to be displayed in the most visible and profitable parts of the third-party websites.

Competition Commissioner Margrethe Vestager said that the restrictions led to a “vicious cycle”. Rival ‘ads’ brokers were not allowed to grow and compete, so it was not possible for them to sell advertising space. As a result, websites opted for using Google services.

“There was no reason for Google to include these restrictive clauses,” the Danish Commissioner said.

In 2016, the company implemented a series of remedies previously agreed with the Commission, which basically removed all the barriers.

But between 2006 and 2016, Google’s behaviour was “illegal” under EU competition rules, as their clauses did not allow rivals to compete under their own merits, said Vestager.

She explained that the volume of the fine reflected the damage caused and the sustained nature of the restrictions.

The Commissioner also noted the positive impact of the remedies adopted by the company to address the issues included in the recent decisions on online shopping and the Android platform.

The Commissioner justified that the mechanism adopted by the firm to open up is price comparing space, by letting rivals to bet for space, took some time to bear results.

In June 2018, one year after the fine was imposed, at least 30% of Google competitors appeared in one of the boxes in the online shopping tool.

Now, around 75% of shopping units display at least one of Google’s rivals. In terms of clicks, the percentage has also increased from 6% to 40%.

With regard to Android, the Commission obliged the firm to open up the platform to rival search engines and browsers, by eliminating a series of barriers that excluded competitors.

Vestager also welcomed the additional measures proposed by the company to strengthen the remedies for Android, by including a choice screen for users in Europe to pick the search engine and the browser.

She said a “choice screen can be an effective way” to increase users’ power to choose.

Vestager fell short of saying that, by concluding the AdSense case, the Google saga reached an endpoint.

“We see positive developments in both the [online] shopping case and the AdSense case”, as rivals are gaining visibility.

She added that the EU executive “will keep monitoring” how the latest measures adopted by Google develop, including how the choice screen is finally implemented.

“We will keep doing our job also in these markets”, Vestager said.

The verdict of the remaining formal case against Google, the most important competition dossier in the Commission history, came on the eve of her nomination to be one of the lead candidates to become Commission President in the Liberal family (ALDE).

She framed the results of the Google case and her step forward in the campaign for the European elections in May as a service to users and voters.

“For me, the most important thing is to enable users”. The changes requested to the company allowed consumers to be in control. “That is of the essence”, she stressed.

She argued that the “active” role she will play in the coming months in the political area aims for getting more people out to vote, and that is “completely compatible” with the non-partisan role she has to play as the guardian of the competition rules.