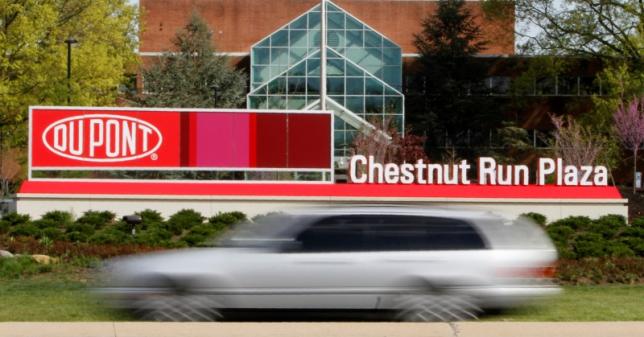 A view of the Dupont logo on a sign at the Dupont Chestnut Run Plaza facility near Wilmington, Delaware, [Reuters]

EU antitrust regulators have opened a full investigation into Dow Chemical and DuPont’s proposed $130 billion merger, saying the deal may reduce competition in crop protection, seeds and some petrochemicals.

The European Commission said the deal, which would create the world’s largest integrated crop protection and seeds company, may also hurt innovation.

“The livelihood of farmers depends on access to seeds and crop protection at competitive prices. We need to make sure that the proposed merger does not lead to higher prices or less innovation for these products,” European Competition Commissioner Margrethe Vestager said in a statement on Thursday.

The EU competition enforcer said concessions offered by the companies last month were insufficient to allay its concerns. Neither the Commission nor the companies provided details on the offer. The regulator delayed its final decision on the deal to Dec. 20.

Dow Chemical and DuPont said they would work constructively with the Commission to address its concerns and that they still expected the deal to close by the end of 2016.

Both companies are major suppliers of herbicides, insecticides, leading producers of gene editing technology as well as strong suppliers of specialty polyolefins which are widely used in packaging and adhesive applications.

The sector has seen a consolidation surge in recent months as companies bulk up to better compete with rivals.