The European Commission’s decision, delayed by a week by US President Donald Trump’s visit to a NATO summit in Brussels last week, is expected on Wednesday.

It comes just over a year after the Commission slapped a landmark €2.4-billion ($2.8 billion) penalty on Google, a unit of Alphabet Inc, for favouring its shopping service over those of competitors.

The EU penalty is likely to exceed the 2017 fine because of the broader scope of the Android case, sources familiar with the matter have told Reuters.

The commission has the power to fine Google up to 10 percent of its parent company annual turnover. #technews https://t.co/OZprRGOwW6 pic.twitter.com/4BogDW5nXh

The EU sanction comes in the midst of a trade conflict between the United States and the EU, which has hit back against US tariffs on European steel and aluminium by targeting $3.2 billion in American exports with higher duties.

The Android decision is the most important of a trio of antitrust cases against Google. With the company able to make its ads show up in more smartphone apps than any other tech rival, Google’s app network has quietly become a huge growth engine.

The company’s high payouts to app developers, coupled with its entrenched relationship with millions of advertisers, has turned Google into the main revenue source for many apps. Its Play Store accounts for more than 90% of apps downloaded on Android devices in Europe.

Its popularity in turn could mean an uphill battle for EU antitrust regulators seeking to level the playing field for Google’s rivals by ensuring that users can download from competing app stores and that smartphone makers are free to choose pre-installed apps. 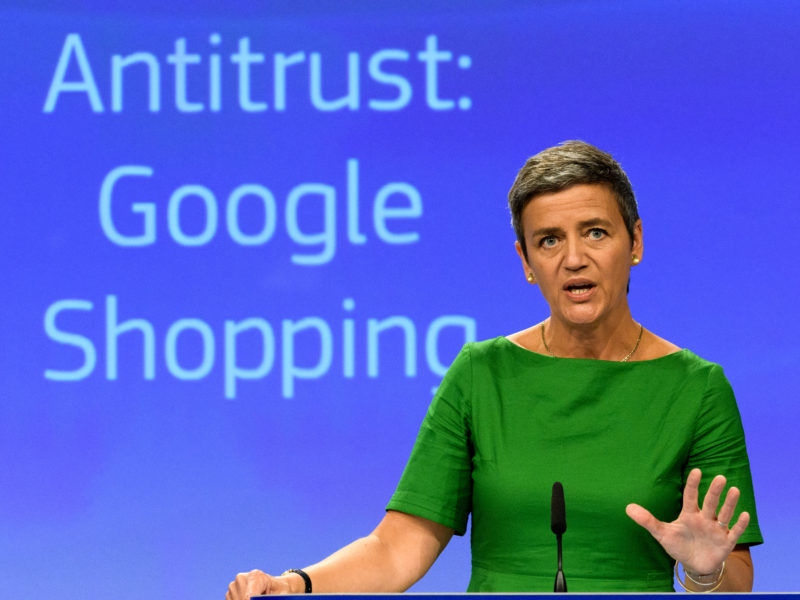 Investigations into how Google may be using its Android smartphone operating system and its AdSense advertising service to thwart rivals are advancing, Europe’s antitrust chief said on Wednesday (18 April), amid concern about the lengthy proceedings.

Google has denied the charges, saying that bundling search with its Google Play allows it to offer the entire package for free, and that smartphone makers and users have a wide choice.

“Users in the EU are now completely accustomed to using Google services and have come to prefer them,” he said.

“Hence, I think separating Google Play from the rest of Google’s Digital Life services would have very little impact as users would simply download and install them from the store,” Windsor said.

The Android case was triggered by a 2013 complaint by lobbying group FairSearch whose members at the time included competitors such as Oracle, Nokia and Microsoft.