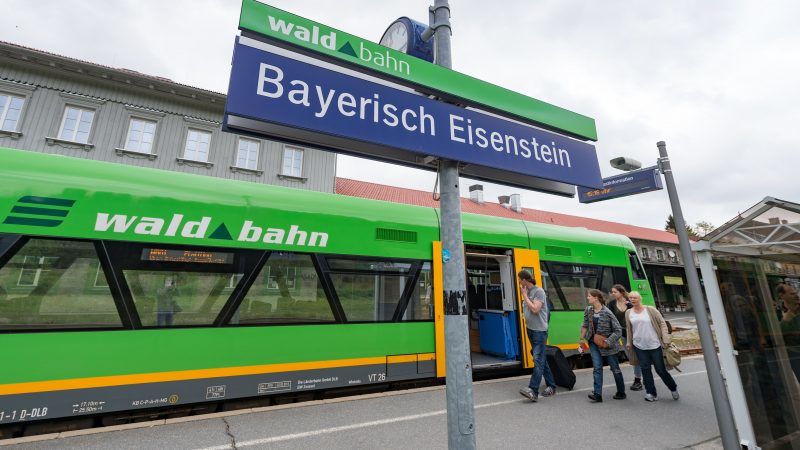 A train standing at the border train station between Germany and the Czech Republic in Bayerisch Eisenstein. The route between Czech Republic and Germany leading through the station was re-opened in 1991 after the fall of the Iron Curtain. [EPA/ARMIN WEIGEL]

Czech firms in the southwest are facing labour shortages as residents living close to the border are increasingly commuting to Germany for work. The main incentives are salaries, three times higher than the Czech average, and child benefits, the so-called kindergeld. EURACTIV.cz reports.

Czech companies, though deeply dissatisfied with this, simply cannot compete with the conditions provided by German employers, which extend as far as the retirement of the departing workers.

Czechs are entitled to the welfare payments even if their children do not live in Germany. If a Czech worker contributes to the German social insurance scheme, he is automatically granted the right to receive 194€ for the first and second child every month, irrespective of salary.  The sum increases with the number of dependent children.

“Even if remuneration were the same across the border, people would nonetheless migrate to Germany for kindergeld payments,” Czech MEP Martina Dlabajová (ANO, ALDE) stated during a panel debate on EU social policy organised by EURACTIV.cz.

On top of that, single mothers and underprivileged households are entitled to kinderzuschlag, a supplementary social allowance. Czechs workers are further attracted by perks provided by German employers as much as on-site working conditions.

Envoys of German labour services regularly organise recruitment events in the Pilsen region with the aim of informing prospective employees of working conditions in Germany and elucidate applicants on what such employment entails.

“Czech firms have been criticising these recruiting practices for a long time. If Czech labour authorities were recruiting German workers across the border as proactively as their German counterparts, it would be fair game. But we´re the ones suffering from this ebb,” explained the chief of the Pilsen Region Chamber of Commerce, Radka Trylčová.

Agency workers are replacing the local ones

According to Trylčová, whilst Czechs move to Germany mostly for menial jobs, Germans in the Czech Republic are assigned senior management positions. Due to this discrepancy, Czech entrepreneurs look elsewhere for substitute labourers and reach out to HR agencies subcontracting workers from other member-states.

Filip Zapletal, the head of the Social Affairs Bureau in the Pilsen region, said his department often deals with agency workers since many of them temporarily sojourn on the streets at the start of their contracts.  Another issue arises when contract workers stay in sleeping quarters in scarcely populated areas or villages where suddenly a few dozen workers from all corners of Europe live alongside several dozen local residents.

The EU regulation on the coordination of social security systems

Recruitment of Czech workers by companies based in Germany is not an isolated issue. Within the European Union, the number of people who practice their right to live and work in other member states has doubled since 2008, bringing the total count to 17 million.

The European Commission has thus proposed to revise the 2004 regulation on the coordination of social security systems so that it is better adjusted to the needs of the current situation.

Currently, it ensures that, for instance, if Czech workers contribute to the German social security system, they must be treated the same as their German peers. Furthermore, when calculating the exact amount of a social welfare payment, the regulation takes into account all of the recipient´s previous professional engagements regardless of the country of employment.

People can thus collect welfare even if they do not or have never lived in the country that employed them – it is called the principle of exported welfare.

Commenting on the state of the negotiations on a possible reform of the regulation, MEP and member of the EMPL committee Dlabajová, stated that “there isn´t yet any specific proposal on the table”. According to her, it is crucial to resolving issues such as the payment of unemployment benefits or child allowances.

“There is a huge ongoing debate about Romanian workers living in Belgium, but with their children staying in Romania, as to where the parents should receive the allowance, in Belgium or Romania,” Dlabajová added.

But uncertainty over the renewal of the regulation prevails.

The ongoing negotiations on the coordination of social security systems could share the same fate as the revision of the directive on posted workers where member states took more than two years to reach an agreement on, participants at the panel warned.

France, Belgium, and other western member states protested against companies from the more recent member states because of what they saw as an abuse of low wages in their countries to undercut competition in the old member states.

They have appealed to the European Commission, which answered with a revised version of the directive enshrining the principle of equal remuneration for the same job in the same location.

This means that when Czech employees are contracted for an assignment in Germany, they will be paid the same sum as their potential German counterpart. Czech industries criticise the proposal whereas Czech trade unions welcome the compromise with open arms. They hope the legislative amendment is going to stimulate wage increases back home.

“We should be curbing the comparative advantage that we hold over low wages. If salaries were at least similar, France, Belgium and other states wouldn´t have the need to create obstructions,” said Jindřich Brabec, the chairman of the Regional Board of the Czech-Moravian Confederation of Trade Unions.