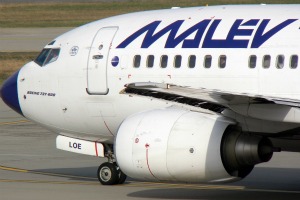 Prime Minister Viktor Orbán said today that the decision to ground Malév, which was placed under creditor protection earlier in the week, was made after two aircraft were not allowed to take off from Tel Aviv and Ireland.

In a December white paper, the government said the potential loss of the airline, which spent about 50 million euros a year on air service charges and real estate fees, could jeopardise the operation of Budapest Airport.

The airline accounts for 40% of turnover at the airport, owned by Germany's Hochtief and four financial partners.

"If this situation continues for a longer period of time, then we will obviously have to revise our business plans for this year and all our contractual obligations," Mihaly Hardy, a spokesman for the airport, told Reuters.

"There are some estimates that over 20 or 23 routes of Malev will never be served by other airlines," he added.

It was not immediately clear whether Malev's halt would automatically trigger a compensation option in the privatisation agreement of the airport first signed in 2005 with BAA, which sold it two years later to its current owners.

In the white paper, the Development Ministry had said the state could be required to pay about 1.5 billion euros in such circumstances, with "grave consequences for the maintenance of the budget deficit target".

Malév said its suppliers had lost confidence and started to demand advance payment for their services, while the government could no longer provide cash injections for the company following a European Union ruling last month. The Commission asked Malév to repay millions of dollars worth of state aid received between 2007 and 2010, the equivalent of its entire 2010 revenue.

"It is painful … We tried to keep Malév operational as long as possible, but we could no longer do it as we would have lost our aircrafts seized abroad … We had to stop," Prime Minister Orbán said.

A Commission spokesperson said the first priority was to re-route or reimburse "several thousand" of stranded passengers, as a EU regulation requires.

On the bankruptcy itself, she said that the EU executive had known from some time that the Hungarian flag carrier had be facing difficulties and was trying to find a competitive business model, which ultimately was nor found.

In terms of state aid, there can be no flexibility according to EU law, she said. The issue of the state aid to Malév was not discussed at the recent meetings of Prime Minister Orbán with Commission President José Manuel Barroso, she added, answering a question by EURACTIV.