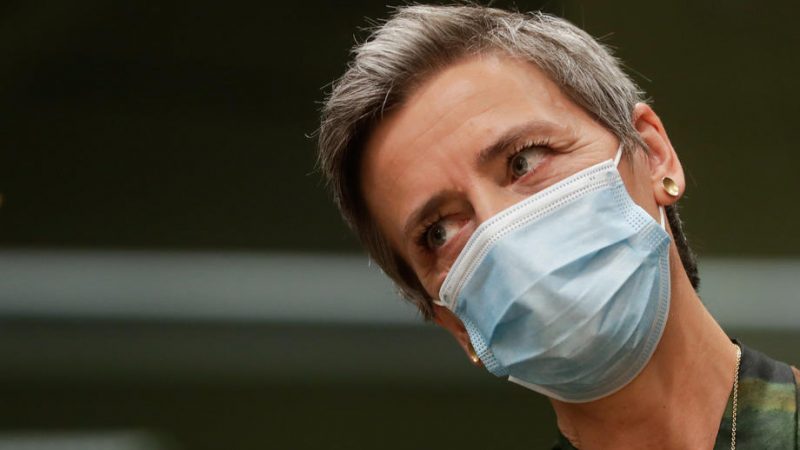 The US-headquartered biotech companies Illumina and GRAIL defied the EU in August by going ahead with the implementation of a merger instead of waiting for the results of an ongoing in-depth investigation by the Commission.

On Monday, the Commission issued a ‘Statement of Objections’ informing Illumina and GRAIL of interim measures that the EU executive intends to adopt to maintain effective competition while the Commission’s review of the $7.1 billion acquisition is pending.

Illumina offers genomic sequencing instruments, while GRAIL is a healthcare firm that develops blood-based cancer tests based on genomic sequencing tools. GRAIL’s flagship product is an early multi-cancer detection test, whose purpose is to detect around 50 cancers in asymptomatic patients from a blood sample.

The Commission fears that Illumina could apply vertical foreclosure strategies, making it harder for GRAIL’s competitors to access the genomic sequencing instruments needed for their products. This could lead to less innovation and higher prices, according to the Commission.

“This particular case is about the loss of potential competition which is a central theory of harm in digital and pharma cases”, said Cristina Caffarra, senior consultant to Charles River Associates.

“And while it is a theory that has been propounded extensively for instance by the UK Competition and Markets Authority, it has had much less weight at DG Comp so far,” she said, referring to the Commission’s directorate-general in charge of competition.

Illumina argues that the merger does not fall under the jurisdiction of EU competition authorities. Indeed, the merger does not meet the criteria to be considered a concentration with a ‘Community dimension’ under the bloc’s Merger Regulation. Among other criteria, the definition is based on the cumulative turnover of the merging companies.

And the Commission seems to agree. It bases its claim on jurisdictional authority on provisions that allow the EU executive to rule over cases that are referred to it by member states.

In March, the Commission published new guidance on the application of these provisions in response to the phenomenon of so-called ‘killer acquisitions’.

Recent studies have shown that many innovative startups are bought by larger incumbent companies and then terminated by those same companies in order to stifle competition. Often, these acquisitions are below the threshold of EU merger rules.

The Commission’s new guidance tries to expand the EU’s competence in competition matters by encouraging more referrals of merger cases from member states to the Commission even if the merger remains below European or national merger control thresholds.

To Michelle Meagher, competition expert and senior policy fellow at the UCL Centre for Law, Economics and Society, the guidance “indicates a real change in paradigm: no longer can firms assume that they have a “right” to merge and to get on with their deal-making as they wish.”

“The essence of merger control to determine which deals operate in the public interest is being reasserted”, Meagher said.

However, not everybody agrees. In a blog post reacting to the Illumina/GRAIL case, Gavin Bushell of BakerMcKenzie worried about the “considerable delay and uncertainty” this could inject into merger processes. He also criticised the significant extension of European merger control jurisdiction without consultation.

In April, the Commission took advantage of the new powers by accepting a referral from France, and announced an in-depth investigation into the Illumina/GRAIL case on 22 July.

Illumina and GRAIL seem willing to test the limits of the Commission’s new guidance.

In August, they proceeded with the merger, violating the standstill obligation that requires companies to wait for the Commission’s verdict on the case. Additionally, they filed a jurisdictional complaint at the General Court of the EU.

The EU’s competition chief, Executive Vice-President Margrethe Vestager, stressed the importance of the standstill obligation as a cornerstone of the ex-ante merger control regime.

“This is the first time companies openly implement their deal while we are carrying out an in-depth investigation,” she added.

Illumina and GRAIL can now react to the interim measures that aim to keep the two companies separate until the Commission reaches a verdict. If they do not comply, the companies could be fined up to 10% of their annual worldwide turnover.

Meagher encouraged the Commission to remain firm and predicted similar cases would arise in the future.

“With the ground shifting towards more intervention by competition authorities we are likely to see more gun-jumping and other similar manoeuvres by parties — and, critically, their scores of advisors and deal-makers — seeking to eliminate the deal uncertainty that they have been accustomed to living without for decades,” she said.