Katharina Barley will definitely be moving to Brussels after the EU elections as she has already given up her Berlin apartment.

Katarina Barley, born in Cologne in 1968, is a German-British lawyer and politician with a PhD in law. After joining the German Social Democratic Party (SPD) in 1994, she has served as a member of the Bundestag since 2013. After assuming the position of Family Minister in 2017 and Justice Minister in 2018, she was nominated to top her party’s list for the 2019 EU elections.

Mrs. Barley, your colleague in the German Chancellery, Helge Braun, is raving about apps that can be used to analyse moles and check them for skin cancer. Would you have your health properties evaluated by artificial intelligence (AI)?

Health is certainly one of the areas where AI offers entirely new opportunities and I am highly in favour of it. I live close to Trier, in quite rural parts, where there are a lot of issues related to medical care. AI can definitely help in such areas. But it is also my job as part of the government to always point out potential risks – one could say that to some degree I am quite the buzz kill.

Because, in addition to Interior Minister Horst Seehofer, who is actually also responsible for data security, I keep an eye, from the consumer’s point of view, on what happens to their data. This is very relevant to the health sector because data in that field is one of the most personal. There needs to be a guarantee for security, more so than in any other area. This applies not only to how data is being processed and stored, but also to how it can later be used by the research sector in an anonymised and pseudonymised form.

Can you make sure that Amazon’s alleged Chinese Wall actually works?

For almost a year now, we have had a much ‘sharper sword’ than we ever had thanks to the General Data Protection Regulation (GDPR). The regulation states that the collection of data may only be allowed if it is necessary to fulfil the contract. For everything else, there is a need to ask additional questions and there are tight limitations to processing data. I will also be checking competition law.

How do you intend to make competition law more digital?

When competition cases are being pursued, there is primarily a review of figures, such as company turnover or customer size. I think that the issue of data should be taken into account more. It should not only be about the amount of data a company uses, but also about the combinations that can arise. When Facebook, WhatsApp, and Instagram merged, it was still unclear how the number of users would evolve. If Amazon’s customer data would merge with data from a health insurance company, this would be an even more blatant example.

Do you trust the big corporations?

No, such corporations are solely designed to maximise profits and can only be tackled from two angles: money and trust. That is why when such lines are being crossed, this needs to be made visible and acted upon. To this end, we must ensure severe penalties are issued, as provided for in the GDPR – the maximum fine is 4% of the company’s worldwide annual turnover, which would amount to €1.6 billion for Facebook, which is still an important sum for this corporation. And, ideally, consumers should have access to alternatives to these giant corporations as it is also about breaking monopolies.

Could this be achieved through a public Google?

I always find such proposals a bit strange because I come from a generation where data protection was primarily claimed against the state. However, there are other possibilities such as interoperability that force monopolists to open up. Technically, it is feasible, particularly in the case of messenger services.

I am not on WhatsApp, nor do I want to be. But my kids are and there are several chat groups that I would be happy to join. But if I could use alternatives like Signal or Threema and still be active on a WhatsApp or Facebook group, this could eventually break the monopoly status – and allow for competition that is consumer-friendly. If consumers run away in droves from a company like Facebook, the corporation might actually consider changing its data protection standards. After all, if I send an SMS, I can send messages to everyone in a group, even if they have different mobile operators. That is also what we need here. I also mentioned this issue to Mark Zuckerberg himself.

Were you under the impression that he took the concerns raised seriously?

I believe that, in light of the repeated data scandals, those in charge are starting to realise that things cannot continue to go on like this.

Does it not benefit corporations when Europe is so divided on digital policy? This started in Ireland, where many tech groups established their European headquarters, and continues with the issue of digital tax, on which it is unlikely that a uniform EU regulation will be enacted?

Tax policy and data protection are to be differentiated, because of the principle of unanimity …

…which some hope will be dissolved…

…which, in turn, also requires unanimity. The GDPR took six years to complete. Although it is not perfect, it is still a milestone. The fact that Europe is in a position to adopt something like this cannot be overestimated. If we can do that, we can do a lot more.

But is the German Social Democratic Party (SPD) not currently facing an irreconcilable contradiction? The digital tax is right at the top of your programme for the EU elections, but Austria is now introducing the matter on its own, while your Finance Minister, Olaf Scholz, says that he is backing an OECD solution.

Olaf Scholz pioneered an EU-wide digital tax together with his French counterpart Bruno LeMaire. The proposal was already so good that it could have already been accepted – but four countries opposed the proposal, including Ireland and Sweden. That is why Scholz is now taking a step further, namely by trying to find a global solution with the OECD. It would be a big deal if we could create a minimum taxation system that not only applies to digital matters, but that would incorporate these as well. A proposal to this effect is to be presented in 2020. If it fails, the digital tax will be introduced once again throughout Europe, which suits us because we have the presidency of the Council of the EU in the second half of 2020. As a last resort, a coalition of the willing could establish a digital tax, similar to what is being done regarding the financial transaction tax.

Have you ever felt discriminated against by an algorithm?

That is the point – if only we could know that. I often book flights on my mobile phone and sometimes make very spontaneous decisions. Every algorithm recognises that I am willing to pay comparatively high prices. Whether I end up being treated worse than anyone else can only be determined by direct comparison. Ultimately, it may even depend on your mobile phone manufacturer.

You received a lot of opposition on matters related to copyright reform and upload filters, was it worth it?

It is the job of politicians to take responsibility. The directive was negotiated over a period of four years. Its aim was to strengthen the rights of creative people, which would undoubtedly affect many interests.  My position has always been the same from the outset. I consider Article 13, now Article 17, to be correct with regards to its objective, but wrong in terms of form. I have also done everything I could to ensure it is modified or even struck out. In the end, however, we are talking about reform of European copyright law in its entirety.

How can we control algorithms better?

I am working to ensure that groups share their large amounts of data with the general public. Of course, by keeping the data anonymous. AirbnB and Uber data, for instance, provide relevant information for urban planning. Our idea is to set up a European cloud in which data is stored and can then be used. This model could break down existing market power and facilitate research.

Soon, you will no longer be the German Justice Minister. Can you promise that the controversial EU Copyright Directive will be implemented at national level without so-called upload filters?

I never made such a promise. But it is possible to program differently content that may be recognised and protected. The directive stipulates that platforms must do everything they can to prevent copyright infringements and that non-protected content must not be blocked.

I would like to address another issue that is emotionally-charged, namely renting and housing. What do you think of the expropriation plans of large housing companies in Berlin?

I can understand that many people are taking this matter to the streets. Expropriations do not create new apartments, take years to take effect and cost money, which can be better invested in social housing.

Are we not holding a thick straw in front of people’s noses that will actually crumble quickly?

The demand for expropriations is particularly popular in Berlin, because people there have become insecure following the rental market’s developments in recent years. We need to invest more in social housing. That is why we changed the German Basic Law so that the federal government can co-finance it. But I find it incredible what some German federal states are doing – Hesse is cutting social housing construction alltogether and the Greens in Schleswig-Holstein are putting an end to the rent barrier. At the same time Mr Habeck is talking about expropriations.

The situation in Berlin will not improve that. There are other possibilities. The Federal Agency for Real Estate Tasks (Bundesanstalt für Immobilienaufgaben), for example, can hand over federal plots of land to local authorities at a preferential price. And if you look around Berlin, you will see many parking lots or large one-storey supermarkets. This is where there is a lot of potential.

Why could expropriation not be a measure of last resort?

Article 15 of the German Basic Law, to which the Berlin Initiative refers, has never been applied. As I said, expropriations do not solve lack of housing. Many German states and municipalities have sold public property in the past, even throughout the whole of Germany. We need more social housing. This seriously impacts the average rent in a city.

You will give up your Berlin apartment on 30 June because you, as the SPD’s top candidate, will be moving to Brussels after the European elections. What will you miss most about Berlin?

In the past years, I have had little time and leisure to discover Berlin as I hoped to. I enjoy the Gendarmenmarket area next to my Ministry- and my apartment. I wake up and hear the birds chirping in the backyard. I will miss this oasis combined with the colourful and lively city of Berlin.

Would you bet your convertible, the Karman Ghia, that you will get a better result than Martin Schulz in 2014?

For every task I take on, I always give one hundred percent. That’s what counts. Such questions are always asked only by journalists and not by ordinary citizens. 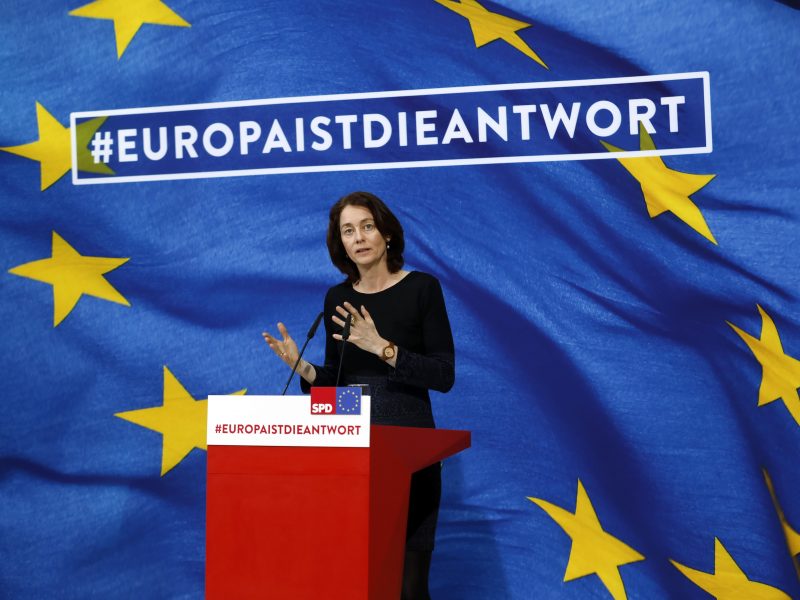 German social democrats' manifesto: What role for the environment?