At a press conference call on Tuesday (17 March), Bruno Le Maire detailed the government's plan of attack, which provides for the mobilisation of €345 billion to support the economy. [Ian Langsdon/EPA/EFE]

Following the announcement of an initial 15-day containment phase throughout France, measures to support the economy were presented by Le Maire on Tuesday (17 March).

President Emmanuel Macron had already promised in his first speech about the coronavirus epidemic that everything would be done to support French companies and employees, “whatever the cost”. 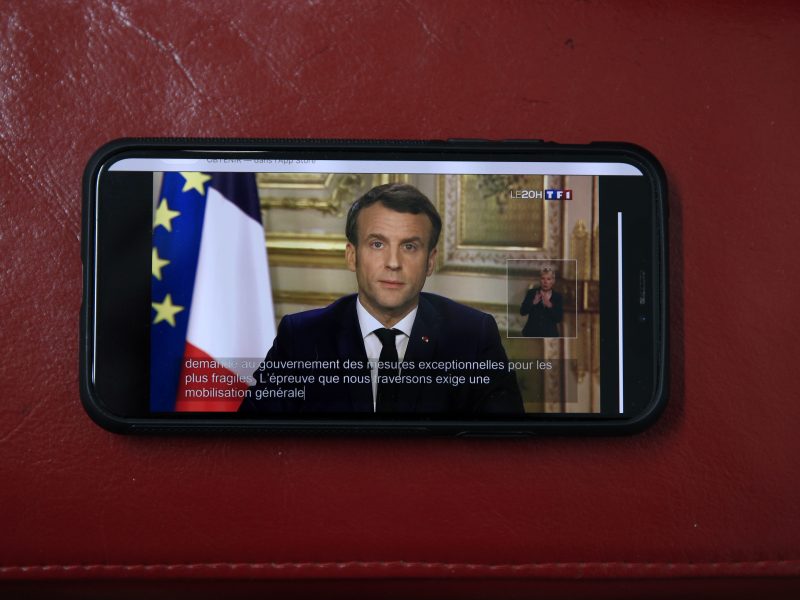 France will close from Monday all nurseries, schools and universities to try to slow the spread of the coronavirus, President Emmanuel Macron said in a televised address on Thursday (12 March), calling the outbreak the nation’s worst public health crisis in a century.

At a press conference call, Le Maire detailed the government’s plan of attack, which envisages the mobilisation of €345 billion to support the economy, from car companies to the corporate giants of the CAC40. “This economic and financial war will be long-lasting” warned the minister.

Macron announced in his speech last Thursday (12 March) that the government would set up a €45 billion fund to be used for cancelling or deferring social security contributions for companies, in order to prevent the bankruptcy of those affected by the stoppage or a sharp slowdown in their activity.

Part of this money will also be used to finance the massive short-time working scheme, which was set up as a matter of urgency.

“We must not have a single SME [small or medium-sized enterprise] that is not in a position to pay its social security contributions,” the minister added. Finally, €2 billion from this fund should make it possible to support micro-enterprises whose turnover will have fallen significantly due to the health crisis.

In addition, a guarantee fund of €300 billion should make it possible to secure bank loans taken out by companies so as to avoid any risk of bankruptcy, particularly of small and medium-sized enterprises.

These substantial support measures should cause the French public debt to soar, which will exceed the symbolic 100% of GDP mark this year, explained Le Maire. France’s economy is expected to shrink by 1% in 2020, compared to the expected 1.3% growth forecast before the start of the pandemic.

The support plan put in place by the French executive could be strengthened if necessary, but it is close to the level of ambition of Germany, where the government has promised a €450 billion package.

Another consequence of the coronavirus crisis is that the stock markets are in free fall and some big French companies are under attack, which the government has decided to counter.

Faced with a further fall in prices on Monday (16 March), the Autorité des marchés financiers (AMF), the French market watchdog, banned short selling for 24 hours on 92 stocks, a measure that may be extended to prevent investors from betting on a decline in stock value.

“Given the significant price declines that have occurred in recent days on the financial markets, the AMF has decided to take an emergency measure,” the AMF announced in a press release. These suspensive measures could be extended for up to one month, according to the economy and finance ministry.

“I will not hesitate to use all the instruments at my disposal for companies attacked on the markets,” said Le Maire, adding that  “this may involve capitalisation or equity investment. I can even use the term nationalisation if necessary”.

These strong announcements come at a time when Prime Minister Édouard Philippe’s government has launched several controversial privatisations, notably that of Française des Jeux, the operator of France’s national lottery games, and of Aéroports de Paris, the airport authority that owns and manages fourteen civil airports in the Paris area.

The legitimacy of both planned privatisations continues to be widely disputed.

On the other hand, the European Commission is likely to take a dim view of Paris’s plan to freeze reforms, including changes to unemployment insurance, housing subsidies or pension reform. And as growth collapses, and the government opts for new spending, the result will inevitably be a hefty deficit in 2020.