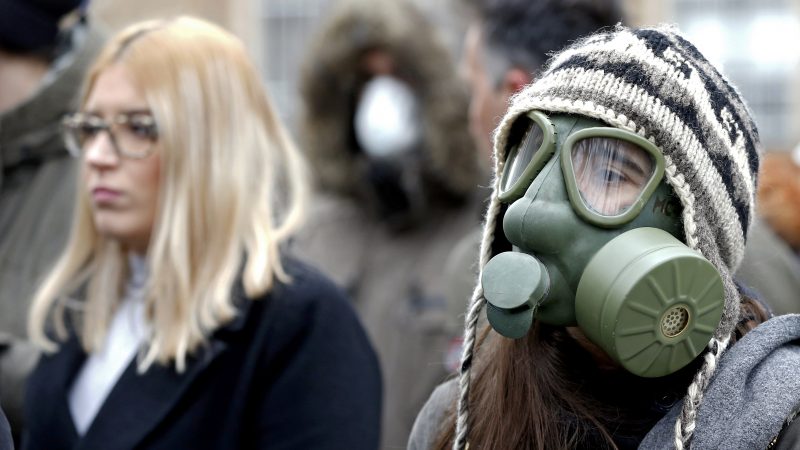 File photo. Sarajevo citizens with protective mask on face, during protests in front of cantonal government due to high air pollution in Sarajevo, Bosnia and Herzegovina, 20 January 2020. [Fehim Demir/EPA/EFE]

The European Public Health Alliance (EPHA) warned that dirty air in urban areas that causes hypertension, diabetes and other respiratory illness could lead to a higher overall death toll from the virus currently sweeping the world.

Emissions from petrol and diesel engines were still at “dangerous” levels that could imperil the most vulnerable during this and future pandemics, said the European Respiratory Society (EPS), which is a member of the EPHA.

“This is likely also the case for COVID-19,” added de Matteis, who is also an associate professor in occupational and environmental medicine at Italy’s Cagliari University.

Several European nations have implemented unprecedented measures to prevent the spread of the disease and allow health systems to treat patients.

COVID-19 is similar to SARS and can cause respiratory failure in severe cases.

Mortality data for COVID-19 is incomplete, but preliminary numbers show the majority of patients who die are elderly or have pre-existing chronic conditions such as heart or lung disease.

According to the European Environment Agency, air pollution leads to around 400,000 early deaths across the continent annually, despite European Union air quality directives.

One COVID-19 hotspot, northern Italy, has particularly high levels of PM10 — microscopic particles of pollution due largely to road traffic.

The number of fatalities in Italy shot up by 368 to 1,809 on Sunday — more than half of all the cases recorded outside China.

‘Clean up the streets’

The shutdown in northern Italy has in fact led to a significant reduction in nitrous oxide and small particulate matter in the air, according to satellite data.

“Governments should have tackled chronic air pollution long ago, but have prioritised the economy over health by going soft on the auto industry,” he said.

“Science tells us that epidemics like COVID-19 will occur with increasing frequency,” added.

“So cleaning up the streets is a basic investment for a healthier future.”