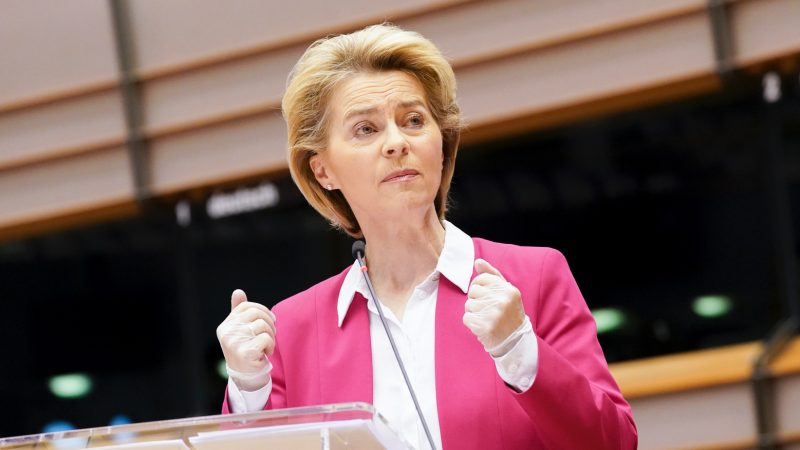 European Commission President Ursula Von Der Leyen heavily criticised the lack of solidarity between member states facing the COVID19 outbreak during a debate in the European Parliament about the EU’s response to the crisis on Thursday (26 March).

The Commission president stressed that “no member state can handle this crisis on their own,”  adding that “it is only by helping each other that we can help ourselves.” However, she regretted the initial response from the capitals, which she described as a “particularly painful” story to tell.

And her criticism was echoed by EU lawmakers in an unprecedented session, as only several dozen MEPs were able to attend due to the existing restrictions to contain the spread of the virus.

“Faced with a single problem, the European member states have given 27 different responses, as if the virus stopped at each border,” said Esteban González Pons (EPP), an MEP from Spain, one of the most affected countries.

Co-chair of the Greens, Ska Keller, argued that “it has taken long before solidarity started to appear”, while Renew Europe MEP Dominique Riquet added: “the lack of solidarity, the lack of communication should be condemned. We know that nationalism is not helping because this virus does not respect borders,” he added.

Members of the European Parliament pointed at member states that had unilaterally decided to close their borders, banned exports of medical equipment and failed to give a helping hand to the countries at the core of the outbreak.

“It’s only through cooperation in Europe that we can beat this virus and recover normal life. We need a joint strategy,” Spanish Socialist Javier Moreno argued.

GUE/NGL MEP Manon Aubry strongly criticised this lack of coordination between member states. “‘A united Europe’ would ensure a coordinated health response. But when Italy ceases all non-essential production, the French government threatens companies wishing to suspend their activity,” she said.

“When Spain is in lockdown, the Netherlands plays the collective immunity card. When Germany massively tests its population, in accordance with WHO recommendations, other states passively wait for patients at the doors of hospitals,” Aubry added calling for a common response.

Nevertheless, EU lawmakers generally praised the Commission’s rapid reaction, with the exception of the far-right ID. French MEP Nicolas Bay put the blame on the executive, rather than countries, and said the EU “is not even capable of coordinating the measures taken by the member states.”

EU lawmakers welcomed the Commission decisions to allow further flexibility within the fiscal and state aid rules, the financial aid packages that the executive has put forward, as well as its assistance in ensuring the supply of medical equipment.

The chamber is voting on an investment package worth €35 billion to support health systems in member states, as well as the extension of the EU solidarity fund so that it can cover health emergencies in European countries, including those in the accession process.

All eyes on member states

The Parliament acknowledged that national capitals are improving cooperation and showing solidarity after all. A number of member states took in patients from Italy to help alleviate the situation in the country and the exchange of medical equipment is finally happening.

However, EU lawmakers asked leaders for a more ambitious response to the extraordinary economic downturn that will most likely follow the already serious health crisis.

Later on Thursday, EU leaders will meet for a virtual European Council to explore a new set of measures to tackle the health emergency as well as the economic fallout including the use of the European Stability Mechanism, the EU’s bailout fund, or the creation of ‘coronabonds’ to mutualise the countries’ debt resulting from the investment in fighting COVID19 would be on the table.

However, it became clear this week that Eurogroup members such as Germany or the Netherlands are not yet ready to move forward in this direction.

During her speech, Von der Leyen quoted Konrad Adenauer, one of the EU’s founding fathers, saying that “history is the sum total of things that could have been avoided,” and urged countries to “do the right thing together – with one big heart, rather than 27 small ones.”

“History is now looking at us.”