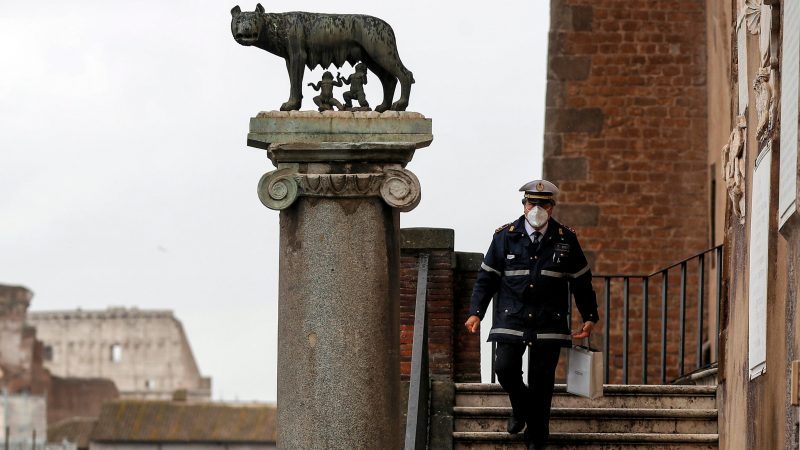 A municipal policemen with a protective mask, due to the COVID-19 Coronavirus pandemic emergency, passes by the statue of the Capitoline Wolf on the Capitol Hill in Rome, Italy, 20 April 2020. [Riccardo Antimiani/EPA/EFE]

Italy is approaching a fateful decision on whether to lift stay-at-home orders and reopen businesses for the first time in nearly two months on 4 May.

Its virus death total of 24,648 is still Europe’s highest and second globally after the United States.

Conte is being pushed into erring on the side of caution by leading doctors — and to think more about the economic toll by big business leaders and some regional chiefs.

Governments across the world fear that premature lockdown exits could set off a second pandemic wave that requires another economically devastating closure.

Waiting for another few weeks or even months could potentially avert that cost.

But many businesses warn that they will not be able stand idle much longer and Italy’s push for a comprehensive economic rescue from the European Union is running into resistance in Brussels.

Conte has convened a taskforce comprised of leading economists and health experts to weigh all the pros and cons.

But he indicated Tuesday that Italians will probably have to put up with various forms of restrictions for some time to come.

“I would like to be able to say, let’s open everything. Right away,” Conte wrote on Facebook.

“But such a decision would be irresponsible.”

‘Virus is still there’

Conte said he will spell out the details of the next stage of Italy’s battle against outbreak as more data come in over the coming days.

But the latest figures showed that the existing measures were producing the desired results.

The number of people who are officially being treated for COVID-19 — either at home or in hospital — is falling in every region.

Conte’s advisers appear to sense Italians’ eagerness to get going — especially as other European nations are starting to gradually open up.

“The virus is still among us — a little less strongly, but it is still there.”

Conte’s decision could also be influenced by the outcome of an economic response teleconference that EU leaders have scheduled for Thursday.

Italy is pushing the bloc to put aside its misgivings and start issuing a form of joint debt dubbed “coronabonds”.

Conte hopes that the pooled instruments could lead to either low-interest loans or outright grants from Brussels that his government can use to rebuild the economy once the pandemic subsides.

He told lawmakers on Tuesday that he would accept “no compromises” at the conference.

“The EU and the eurozone cannot afford to repeat the same mistakes they made in the 2008 financial crisis, when it not possible to offer a joint response,” he said.

Conte’s push for the issuance of mutualised EU debt has run into opposition from countries such as Germany and the Netherlands.