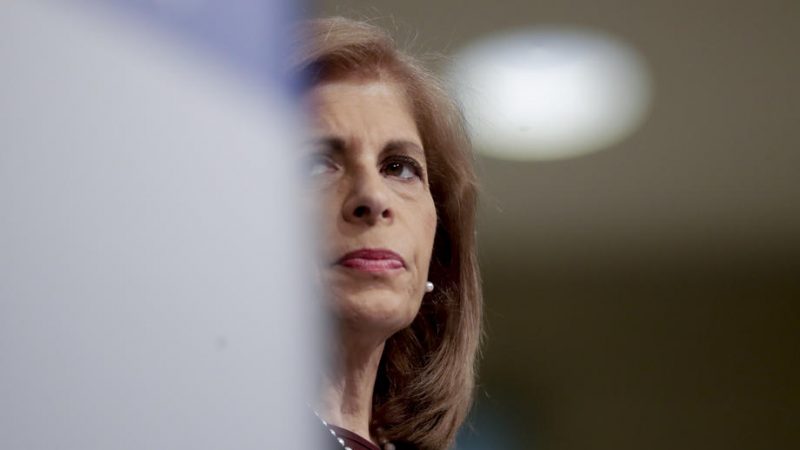 Health commissioner Stella Kyriakides said that around three million Europeans are being vaccinated every day. [EPA-EFE/HOSLET]

The EU executive reacted to an interview with AstraZeneca CEO Pascal Soriot, published by the Italian daily Repubblica, where he said the company was going to make “its best effort’ to meet the demand.

Last Friday (22 January), AstraZeneca announced they would delay for up to a month the shipments of vaccine doses agreed with EU countries due to production problems at their facility in Belgium.

The Commission has not revealed how many doses are outstanding as the information is covered by the confidentiality clause, but a senior EU official confirmed that it is approximately a quarter of what was meant to be delivered.

The Commission sought clarifications from AstraZeneca and was not satisfied with the first answer it provided at the beginning of the week, so another meeting was convened on Wednesday evening (27 January).

The meeting, attended by Soriot himself, turned out to be another no-go, with the company failing again to provide a specific timeline for deliveries.

In a tweet published after the meeting, EU’s Health Commissioner Stella Kyriakides regretted the continued lack of clarity on the delivery schedule and requested a clear plan from AstraZeneca for the fast delivery of the number of vaccines for the first quarter of 2021.

“We will work with the company to find solutions and deliver vaccines rapidly for EU citizens,” she added.

Following Soriot’s interview, the Commission has asked the company to publish the contract as they disagree with the interpretation of certain clauses given by the company.

In a press conference on Wednesday (27 January), Kyriakides expressed serious concerns regarding AstraZeneca’s intention to supply in the coming weeks considerably fewer doses than originally announced.

She confirmed that the EU and its member states expect the vaccine maker to deliver on its commitment.

“We are in a pandemic, we lose people every day. These people are not numbers. Pharmaceutical companies, vaccine developers, have moral, societal, and contractual responsibilities, which they need to uphold,” Kyriakides said.

The company said they are not obliged to deliver because they have signed a so-called best effort agreement, which does not commit the company to a specific timeline for deliveries.

However, Kyriakides found this neither correct nor acceptable, as not being able to ensure manufacturing capacity is against the letter and spirit of the contract.

According to the Cypriot Commissioner, the EU has signed an advanced purchase agreement (APA) for a product which at the time did not exist, and which is not yet authorised and this precisely to ensure that the company builds the manufacturing capacity earlier so that they can deliver a certain volume of doses the very day it is authorised.

A senior EU official explained that the Commission had selected the company on the basis of its production capacity, so they are supposed to be able to produce in time.

In the interview, the AstraZeneca CEO also said the deliveries were delayed because the EU had signed the contract three months after the UK, who now have priority.

“We reject the logic of first come first served, that may work at the neighbourhood butcher but not in contracts, and not in our advanced purchase agreements,” Kyriakides said, stressing that there is no priority clause, as well as no hierarchy of the four production plants named in the contract.

Two of the four manufacturing sites are in the EU, while the rest is in the UK, but the EU expects the latter to produce doses and deliver them to the EU if they prove to work better.

“The contract includes more than one plant, as you can imagine because we would not buy vaccines [from a company] with only one plant,” said an EU official familiar with the matter.

“No company should be under any illusion, that we don’t have the means to understand what is happening. And so we asked all companies to be as transparent as possible with information,” said Kyriakides.

The Commission does not exclude on-site inspections to verify if what they have been told is correct and they are already in contact with Belgian authorities to understand what is happening with the Belgian production site.

However, the EU official concluded, seeking compensation or terminating the contract is not the focus of their attention. “We are most interested in actually receiving the vaccines”.

Kyriakides recalled that there were difficulties with BioNTech/Pfizer too two weeks ago and they have worked together to solve them.

“What we are asking here of AstraZeneca is that they are as open and transparent with what the situation is so that we can move forward and resolve the situation for the benefit of citizens,” she said.