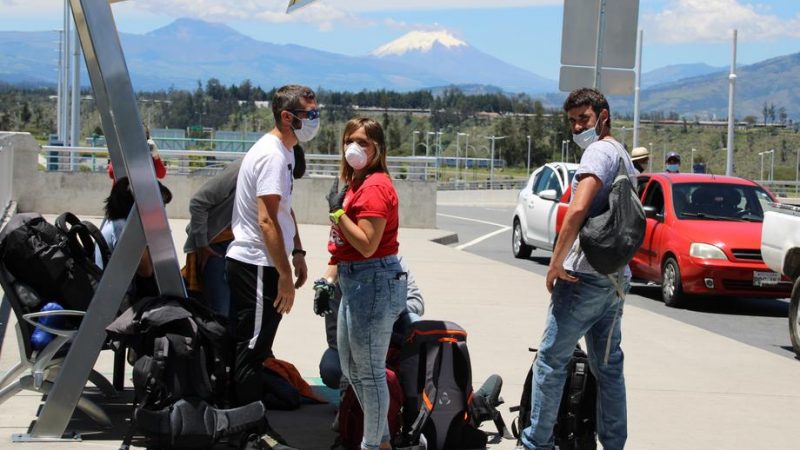 Foreign ministers in their first-ever video conference on Monday (23 March) discussed the ongoing efforts to repatriate hundreds of thousands of European citizens who have become stranded abroad since the COVID-19 pandemic took hold of Europe.

On Monday (23 March), there were 351,705 confirmed coronavirus cases worldwide, according to data from Johns Hopkins University. A week ago, the World Health Organization (WHO) had declared Europe the epicenter of the pandemic.

The huge spike in cases prompted countries on other continents with much smaller numbers to impose restrictions on tourists and business visitors from Europe.

“There are some countries where we have some concerns, especially in Asia, Latin America and Subsaharan-Africa, where a growing number of travellers are seeking help to return,” Borrell told reporters after the meeting.

The EU’s chief diplomat confirmed there are around 20 hotspots globally where air traffic is in difficulty.

Borrell said the EU’s repatriation attempts so far would concern only travellers, and not EU citizens permanently living abroad, as the EU’s Civil Protection Mechanism “is not designed in order to deal with hundreds of thousands of people”.

Speaking to reporters, Borrell said that consular protection and repatriation are the primary responsibility of member states and airlines flights, which are currently scarce because many airlines have grounded their flights.

An estimated number of 300,000 EU citizens are currently seeking repatriation due to the coronavirus outbreak, with Latin America and Southeast Asia two regions where it is proving tough to get people home, the EU’s chief diplomat Joseph Borrell had said on Friday (20 March).

The EU’s Civil Protection Mechanism has so far facilitated the repatriation EU citizens to Europe from Wuhan, Japan, Oakland, Morocco and Tunisia since the beginning of the outbreak.

“Another thing that worries us is the clear attempt to discredit the European Union, even through the stigmatisation of European citizens abroad, presenting the coronavirus as a kind of ‘white people disease’, blaming European citizens,” Borrell said, adding that in many cases there had been “a populist push saying the planes are bringing the disease with them”.

“Spreading disinformation is playing with people’s lives. Disinformation can kill,” Borrell said, adding that the EU’s disinformation task force has found more than 1000 cases which sometimes would push into this kind of actions.

He said the problem was “not a matter” of declarations by any government, but rather “the wide spread of fake news produces reactions and attitudes among people which are very dangerous”.

Borrell confirmed that one airport in Ecuador had been reluctant to allow planes from Europe to pick up Europeans, fearing they might be bringing the virus with them.

One specific incident was the airport in Guayaquil, Ecuador, where the local mayor on Thursday (19 March) ordered trucks onto the runway to prevent an Iberia flight from landing, which was planning to repatriate 190 EU citizens.

The plane had flown from Madrid to repatriate Spaniards after Ecuador closed its borders to foreign travellers.

Guyaquil’s mayor, Cynthia Viteri, called the repatriation effort ‘criminal’.  “How is it possible that you were going to permit this crew to stay in the city with the most coronavirus cases?” she said.

Following the unusual incident, the EU had asked Ecuador to guarantee access to its airports to ensure it can airlift citizens out of the South American nation.

Spain’s Foreign Minister Arancha Gonzalez said on Friday (20 March) her administration has discussed the situation with the Ecuadorean foreign minister and is currently preparing new flights to Guayaquil, Ecuador.

In a statement, Iberia stated that it continues to seek Peru’s permission to fly to Lima and to repatriate trapped Spanish citizens.