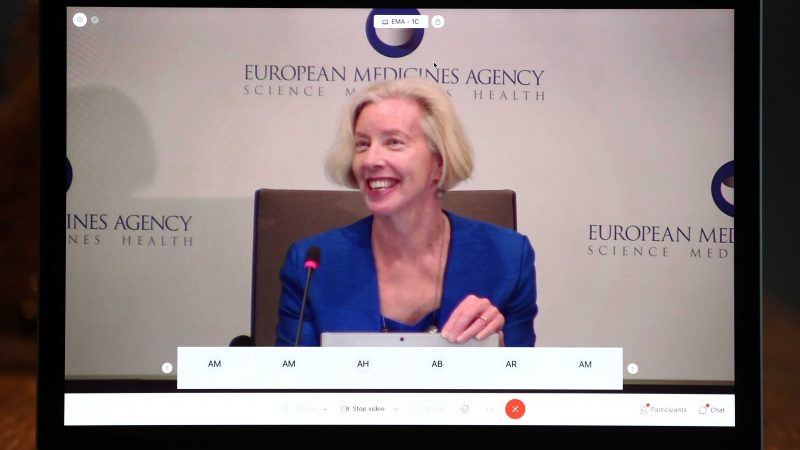 A photo taken off the screen of a laptop shows Emer Cooke, CEO of the European Medicines Agency (EMA), explaining the approval of the Pfizer / BioNTech coronavirus vaccine during an online press conference in Amsterdam, The Netherlands, 21 December 2020. [Pieter Stam De Jonge/EPA/EFE]

The head of the European Medicines Agency said Monday (10 May) that BioNTech/Pfizer’s jab against Covid-19 could be approved in the EU for 12- to 15-year-olds soon, perhaps as early as this month.

“Right now, the goal we’ve set ourselves is approval in June. We are trying to see if we can accelerate that for the end of May,” Emer Cooke told journalists from four European newspapers: France’s Les Echos, Germany’s Handelsblatt, Spain’s El Mundo and Italy’s Corriere della Sera.

Her comments were published as the EMA’s US counterpart, the Food and Drug Administration, announced it had authorised the BioNTech/Pfizer vaccine for 12- to 15-year-olds.

Cooke said that Europe’s regulator, based in Amsterdam, had received BioNTech/Pfizer data and “we’ve been promised data from clinical trials and the study carried out in Canada within the next two weeks, and we are going to speed up our evaluation”.

In the interview, Cooke was repeatedly questioned about the US-backed push for vaccine patents to be lifted but did not commit to either side of the debate.

The European Commission and EU leaders have said they believe that call is not a priority, pointing out that Europe is already exporting as many vaccine doses as it keeps for itself, unlike the United States, which has dispatched very little.

Cooke, a 60-year-old Irish citizen, was also asked about whether she had been vaccinated.

She replied she had been in the Netherlands, as her age range had been called up.

“I was vaccinated around a week ago with AstraZeneca. I’ve had my first shot,” she said.

She added that she would have her second jab of that vaccine later on.

AstraZeneca has come under fierce criticism by the European Commission for failing to deliver most of the doses it had promised to the EU, which is now the source of a lawsuit.

A link between its vaccine and very rare blood clots coupled with low platelet counts has prompted several EU countries to restrict the AstraZeneca jab to older people only. Denmark has abandoned it entirely.

The EMA, while acknowledging the blood-clot link, has maintained a recommendation that AstraZeneca be used for all adult age groups.