EU leaders confirmed the proposed closure of the EU’s external and Schengen borders for at least 30 days on Tuesday (17 March) as the bloc continued struggling to come up with a unified response to the coronavirus outbreak.

They also decided to establish fast-track lanes at their countries’ frontiers to keep medicines and goods moving. Medical professionals and scientists would be exempt from the travel restrictions.

“To limit the spread of the virus globally, we agreed to reinforce our external borders by applying a coordinated temporary restriction of nonessential travel to the EU for a period of 30 days,” European Council Charles Michel said after the leaders’ three-hour teleconference on Tuesday night.

“We are ready to do everything that is required. We will not hesitate to take additional measures as the situation evolves,” European Commission President Ursula von der Leyen echoed, speaking alongside Michel.

It was the second meeting of this kind in a week, this time together with the heads of Eurogroup and European Central Bank, after EU27 discussed for the first time on 10 March how to coordinate EU efforts to contain the COVID-19 outbreak.

The EU’s executive warned member states that this was just the beginning of the crisis, which Germany said would run for “months rather than weeks”, diplomats said after preparatory talks on Monday evening.

In Tuesday’s meeting, EU leaders agreed to the Commission-proposed unprecedented 30-day ban on travel for foreigners going to the bloc’s Schengen passport-free zone, aimed to contain the virus outbreak. They also agreed to coordinate the repatriation of EU citizens stranded outside the bloc. 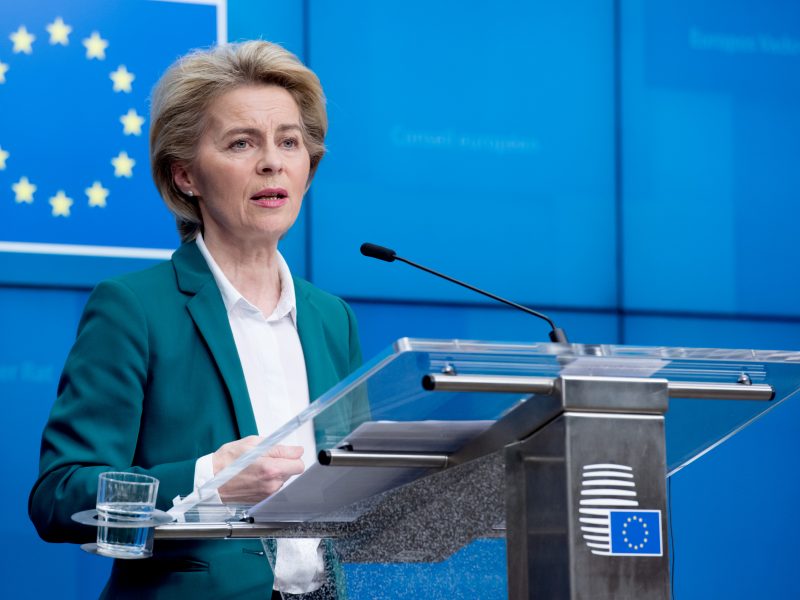 Europeans returning home, social workers, cross-border professionals or citizens of former EU member Britain would not be affected by the measure. Medical professionals and scientists would also be exempt.

The travel ban is the EU’s first major properly coordinated response to the health crisis.

However, the bloc-wide border lockdown will lie in the hands of each single country to implement, as the Commission lacks the powers to enforce it. Effectively, this could result in each member state making its own compromises to the agreement.

“It’s up to the member states now to implement,” von der Leyen told reporters. “They said they will immediately do that. ”

In recent weeks, the bloc has scrambled to find a coherent response to the coronavirus crisis, with countries imposing their own border checks, limiting exports of medical equipment or failing to share data swiftly.

Only in the past few days, some member states have unilaterally adopted various policies to slow the rapid surge in coronavirus cases on the continent. Italy, Spain, France, Belgium and others, one by one, have opted for widespread lockdowns, ordering citizens to stay at home for all but essential trips, while the Netherlands has taken a looser approach.

Addressing reporters, Michel announced EU leaders had agreed on the “need to work together” to provide everything necessary to tackle the coronavirus crisis and its consequences.

Michel said he welcomed the Commission’s decision to adopt the prior authorisation for export for medical equipment, adding it would be “essential to make progress” on efforts to engage with industry for the procurement and purchase of equipment through the civil protection framework.

“The EU and member states will do whatever it takes to address the current the situation, to restore confidence and support a rapid recovery for the sake of our citizens,” Michel said, in reference to the economic and social dimension of the health crisis..

“We want to move ahead together to meet the same objectives together to push back threat, slow it down, and that is why all member states have taken very strong measures to reduce travel, reduce movement to contain this and take the pressure off health services.”

A 26-27 March EU summit will be held by videoconference, Michel announced.

EU leaders will have a heavy agenda, from economy and digital issues (5G and Artificial Intelligence), to “a broad strategic discussion” about relations with China and an unlikely meeting with the Sahel G5 leaders over regional security.

One of the issues, again, is whether to start EU membership talks with North Macedonia and Albania.

EU27 leaders have so far fallen short of agreeing any European response to what is expected to be a devastating economic fall-out from the crisis, which could be addressed during the next conference call.

Conte, whose country has been the hardest hit by the health crisis in Europe, called for special “coronavirus bonds”, or a European guarantee fund, to help member states finance urgent health and economic policies. 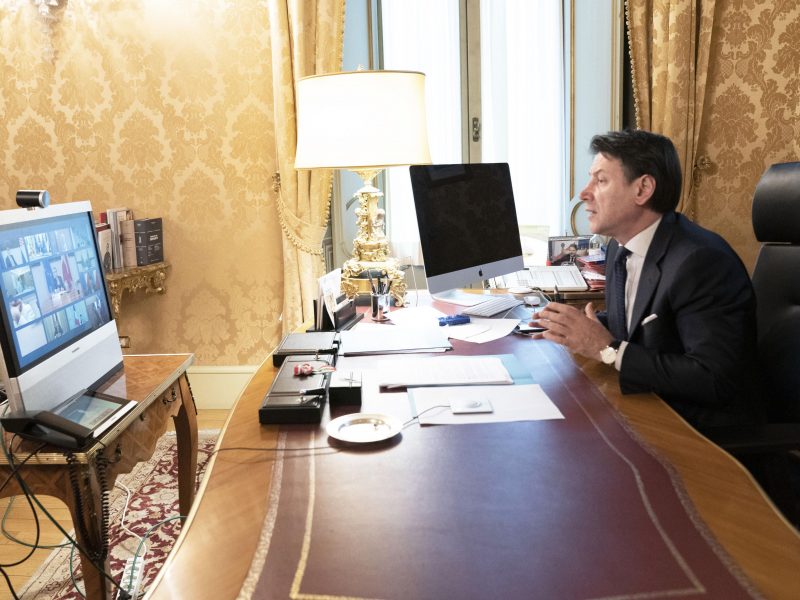 Asked about Conte’s proposal, Merkel said eurozone finance ministers would continue discussing ways to help their economies cushion the impact, but no decision has been made.

“These are initial discussions and there have been no decisions by the finance ministers,” said Merkel. “I will talk to (Finance Minister) Olaf Scholz so that Germany continues to take part (in the discussions). But there are no results regarding this.”

VDL hopes for vaccine ‘this year’

Before the tele-summit, von der Leyen, a trained doctor, said that after holding talks with the German biotech firm CureVac, which has received an offer of €80 million euros in EU financial support for its research, she hopes that a vaccine against the novel coronavirus strain will be available this year.

But she was far more confident than many health experts, who predict that it will take at least a year or more to find, test and approve the new drug.

Earlier on Monday (16 March), CureVac had denied newspaper reports that US President Donald Trump had offered to pay for exclusive rights to a coronavirus vaccine, and the German government said it has “dealt with” the situation.