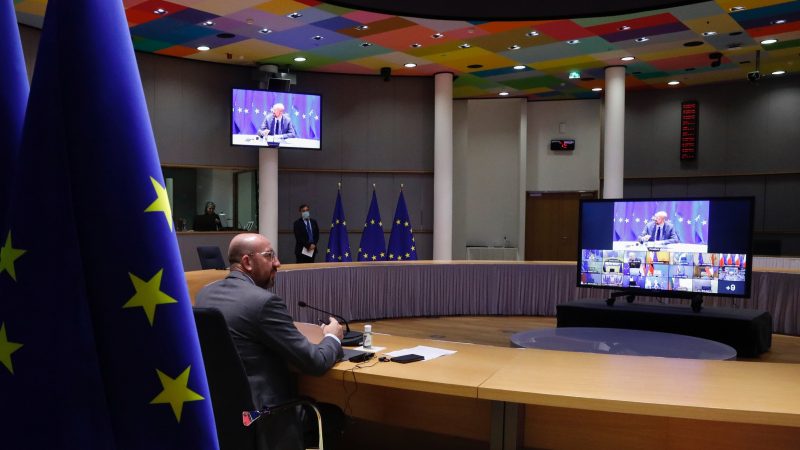 EU leaders on Thursday (21 January) “strongly discouraged” Europeans from non-essential travel and warned tougher restrictions on trips could come within days if efforts to curb the coronavirus fell short.

EU chiefs Ursula von der Leyen and Charles Michel issued the warning after a four-hour summit by video link with the heads of government of the 27-nation bloc focused on responding to the second wave of the pandemic.

The tone of urgency was fuelled by fears over the spread of highly contagious coronavirus variants that could send already high infection rates skyrocketing and strain hospitals, as is happening in former EU member Britain.

“All non-essential travel should be strongly discouraged both within the country and of course across borders,” von der Leyen, head of the European Commission, told a media conference.

Michel, president of the European Council, said: “It will be probably necessary to take additional restrictive measures in order to limit the non-essential travels and that is the orientation that we are taking.”

Both added that further coordination on that issue would be made in “the next days”.

We are convinced borders must remain open. At the same time, we are also convinced restrictions on non-essential travel must be considered. @EUCouncil recommendations might have to be adapted in this respect. #EUCO #COVID19 pic.twitter.com/X8Vv3UPrPJ

But both also said the EU wanted to avoid a repeat of the height of the first wave, in March last year, when several member states panicked and closed off national borders unilaterally, triggering travel and economic chaos.

“It is absolutely important to keep the single market functioning,” von der Leyen said, so that workers and freight can continue to cross borders.

The European Union is “one epidemiological zone,” she said.

Hotspots of COVID-19 infections in the European Union will be labelled “dark red” zones, and travellers from those areas will be required to take a test before departure and undergo quarantine, von der Leyen said.

“A dark red zone would show that in this zone, the virus is circulating at a very high level,” she said, adding that “persons travelling from dark red areas could be required to do a test before departure, as well as to undergo quarantine after arrival.”

This system would apply to travel within the EU, she said.

“We will only contain the virus if we have targeted measures, and not unnecessary measures like a blanket closure of borders, which would severely hurt our economy, but not very much restrict the virus.”

To avoid closing the intra-EU borders in the passport-free Schengen zone, testing needs to be stepped up, leaders agreed.

From Sunday, anybody arriving from outside the EU — possible only for those with essential reasons — could have to have a test for Covid-19 before departure, von der Leyen said.

Within the EU, some countries will apply prior testing for cross-border trips that do not come under essential categories such as workers and truck drivers.

From Sunday France will require a negative PCR test 72 hours before departure for most European arrivals other than those on essential travel, President Emmanuel Macron told the European Council, according to his office.

A statement from Macron’s office said “some of his European counterparts” have also chosen this approach.

The summit also backed wider use of antigen tests in other situations deemed low-risk. Those tests, often using saliva samples, are cheaper and faster — though less reliable — than nose-probing PCR tests.

Thursday’s summit started just as the European Centre for Disease Prevention and Control said there was a “very high” probability of the more contagious variants spreading in the European Union.

These mutations — which emerged in Britain, South Africa and Brazil — have already prompted bans or restrictions on travellers from those countries.

Belgium — wedged between Germany, France and the Netherlands — had gone into the summit pleading for a “temporary” closure during its February holiday period.

Currently, the concerning variants remain a tiny proportion of overall cases in most of the EU.

But Portugal is serving as an early warning of what may be to come.

Its government ordered schools closed for two weeks because of the rapid spread of the British variant, which Prime Minister Antonio Costa said accounted for 20% of infections and could make up 60% as soon as next week.

While there was no indication as yet the new variants were more deadly, there were concerns their faster spread could overload hospital intensive care capacity.

After a disappointingly slow start to vaccination in the EU, the European Commission has been urging greater speed from member states.

In this respect, commitments on deliveries made by companies must be respected.

Vaccines should be distributed at the same time and must be on a pro rata population basis. #EUCO #COVID19 pic.twitter.com/LuBYVPZEcd

It hopes to soon authorise more vaccines beyond the BioNTech/Pfizer and Moderna ones currently being injected, and aims to inoculate 70% of adults in the EU before September.

The leaders also discussed vaccine certificates, something tourism-dependent countries such as Greece hope might ease travel curbs and save what looks like another disastrous summer vacation period.

But EU leaders decided it was too early and too many questions remained for such a certificate to be used as anything more than a health record.