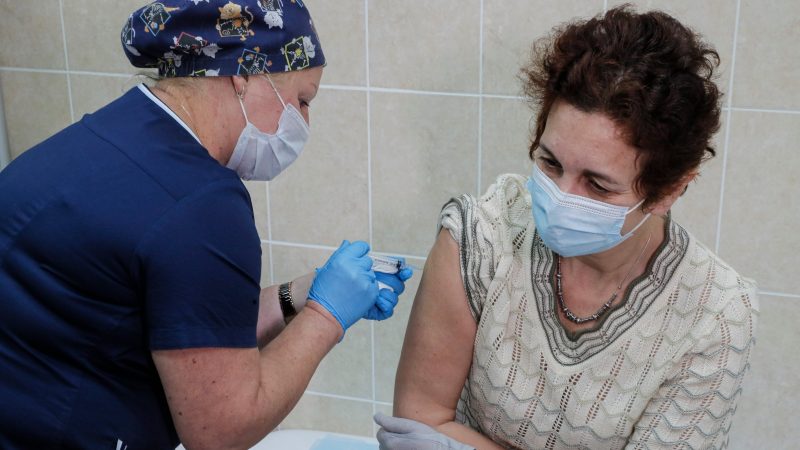 A Russian medical worker gives a trial vaccine against COVID-19 to a volunteer in a post-registration phase of the test at outpatient hospital number 68 in Moscow, Russia, 17 September 2020. [Sergei Ilnitsky/EPA/EFE]

The Russian announcement came two days after pharma giant Pfizer and Germany’s BioNTech said phase-three results found their vaccine to be more than 90% effective, injecting hope into the battle against the virus and thrilling stock markets.

Speaking to AFP, Andrea Ammon, the director of the Stockholm-based European Centre Disease Prevention and Control (ECDC), said a vaccination programme could be kicked off “optimistically (in the) first quarter next year, but I can’t be more precise.”

But European Central Bank president Christine Lagarde warned that even with a vaccine, “the recovery may not be linear, but rather unsteady, stop-start and contingent on the pace of vaccine roll-out.”

Speaking to a virtual forum on central banking, she added: “We could still face recurring cycles of accelerating viral spread and tightening restrictions until widespread immunity is achieved.”

Lagarde’s remarks came as the pandemic marched on, with the caseload soaring in the United States, where a record 200,000 new Covid-19 cases were registered on Tuesday and another people 1,535 lost their lives in 24 hours.

The virus is reaching the farthest corners of the earth, with the tiny Pacific Ocean state of Vanuatu reporting its first case, ending its status as one of the few remaining virus-free countries.

In Europe, which has suffered more than 317,525 deaths from nearly 13,330,000 infections, many countries are struggling with a surging second wave.

The European Commission announced on Wednesday that it intended to build a new agency to prepare for similar crises in the future.

While health policy is mainly the responsibility of the bloc’s 27 member states, EU Health Commissioner Stella Kyriakides said Covid-19 had shown the need for coordination.

On Tuesday, the EU parliament and member states struck a deal to pass the bloc’s multi-annual budget, unblocking €750 billion in coronavirus recovery funds.

Race for a vaccine

A vaccine is seen as the best chance to break the cycle of deadly virus surges and severe restrictions across much of the world since Covid-19 first emerged in China late last year and ballooned into a pandemic.

As of mid-October, the World Health Organization has identified 42 “candidate vaccines” at the stage of clinical trials, up from 11 in mid-June.

The Sputnik V developers based their calculations on results from 16,000 individuals who received two doses of the vaccine, Russia’s health ministry, the state-run Gamaleya research centre and the Russian Direct Investment Fund (RDIF) said in a statement.

Russia in August became the first country to register a coronavirus vaccine, but did so ahead of the large-scale clinical trials that are still under way.

Forty thousand volunteers at 29 medical centres are taking part in the third and final phase of Sputnik V trials.

Wednesday’s statement added that the interim research data will be published in one of the world’s “leading peer-reviewed medical academic journals”.

Overseas trials are also taking place in the UAE, Venezuela, Belarus and other countries, it said.

Despite encouraging news on the medical front, rising infection and death rates are the current reality for many governments.

The virus has claimed at least 1,275,113 lives worldwide, according to an AFP tally, with more than 51 million cases registered across the globe.

Italy’s trailblazing rapid tests, which are roughly 80 to 90% accurate, have done little to stop an outbreak that has rocketed from around 500 cases a day in August, when they were first rolled out, to more than 35,000 now — with infections set to top one million on Wednesday.

In Ukraine, meanwhile, nearly 2,000 people protested in Kyiv against possible weekend restrictions that officials say may come into force to slow the spread of the virus there.

With end-of-year holidays approaching, some governments are looking for ways to help families celebrate together.

University students in England will be allowed to travel home in early December after a four-week lockdown is eased, the government says.