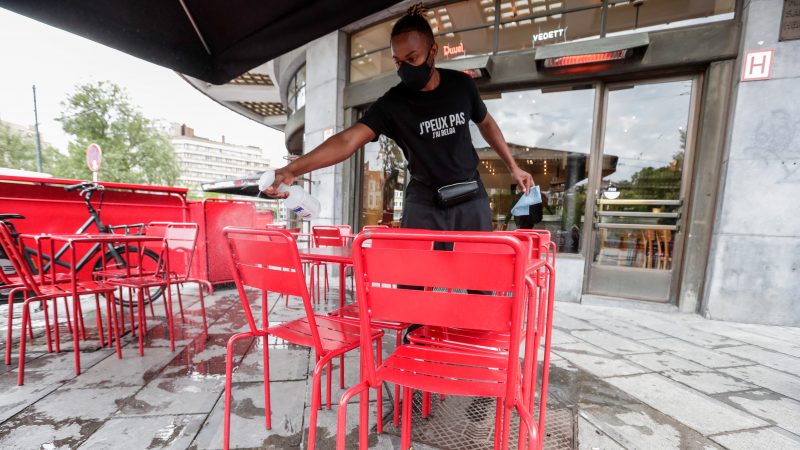 A waiter wears a face mask while disinfecting a table at the 'Le Belga' bar as the HORECA sector reopens in Brussels, Belgium, 08 June 2020. [EPA-EFE/STEPHANIE LECOCQ]

With Europe topping six million coronavirus cases, Scotland and Brussels became the latest to introduce curbs on alcohol consumption Wednesday (7 October), while experts detailed the hugely divergent consequences of the pandemic for the world’s richest and poorest.

A two-week pub closure in central Scotland, including Glasgow and Edinburgh, was designed as a “short, sharp action to arrest the worrying increase in infection,” First Minister Nicola Sturgeon said.

In Brussels, bars and drinking alcohol in public places will be banned until November 8, the regional government said. An 11pm bar curfew had already been announced for the rest of the country.

It is the second time Brussels has imposed such a measure since the outbreak, and comes a day after the same order was imposed for bars and cafés in Paris. 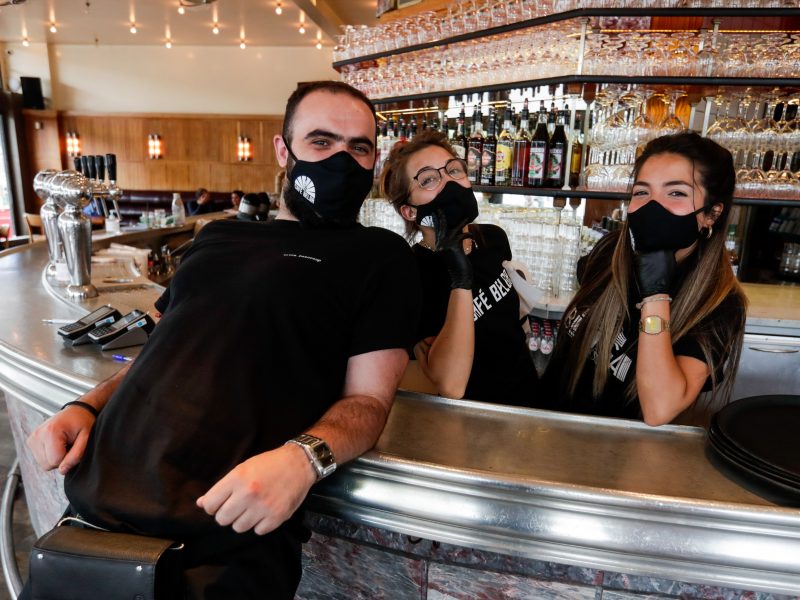 As some Brussels cafes reopened after almost three months of lockdown, thirsty Belgian drinkers were more than ready.

In Switzerland, there were strong words from Health Minister Alain Berset as the country saw positive tests top 1,000 in 24 hours for the first time since April 1.

“Get a grip,” Berset told the public, urging respect for physical distancing and hand hygiene in private as well as public.

Meanwhile Italy imposed an outdoor mask-wearing requirement nationwide and extended its state of emergency to January 31.

Across the Atlantic, President Donald Trump’s doctor said the Republican leader had been free of COVID-19 symptoms for 24 hours and without a fever for four days, after he emerged Monday from a weekend hospital stay.

“The president this morning says ‘I feel great,'” doctor Sean Conley said in a brief update. 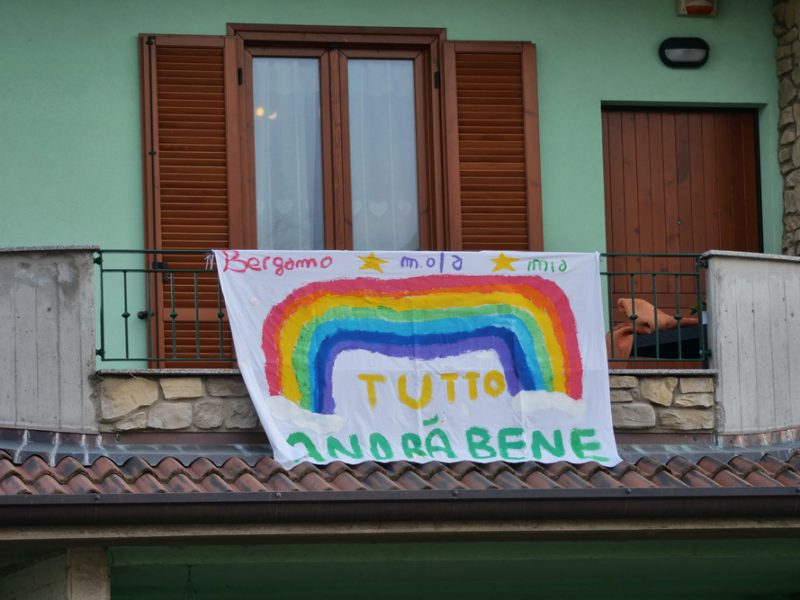 EU countries still do not report enough to the European Commission about the situation on the ground when it comes to COVID-19, putting at risk the attempt to formulate a unified approach to tackle a second wave of the pandemic.

A flagship World Bank report emphasised the long-term devastation being wrought by the pandemic, especially in the developing world.

It said as many as 115 million people could be pushed into extreme poverty this year — measured as living on less than $1.90 a day – rising to 150 million people in 2021.

“The pandemic and global recession may cause over 1.4% of the world’s population to fall into extreme poverty,” World Bank President David Malpass said in a statement.

By contrast, a report by Swiss bank UBS and accounting firm PricewaterhouseCoopers found that the world’s billionaires have reached record new heights of wealth under the pandemic.

Tech, health and industry “innovators and disruptors” such as Elon Musk have led the way, with the cumulative wealth of the world’s 2,189 dollar billionaires reaching a total of $10.2 trillion, exceeding the previous peak of $8.9 trillion in 2017, it said.

“We must all draw the hard lessons of this crisis,” Guterres said in a video message.

“One of those lessons is that under-investment in health can have a devastating impact on societies and economies.”

A UN report stressed the need to “massively expand access to new rapid diagnostics and treatments and ensure future COVID-19 vaccines are a global public good with equitable access for everyone everywhere.” 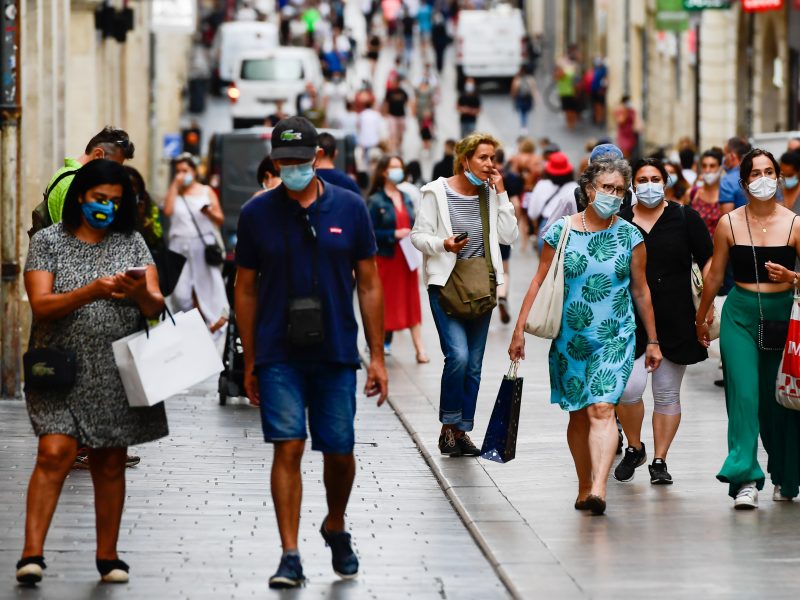 In Spain, the government announced plans for rebuilding the ravaged tourism-dependent economy on Wednesday, vowing to create 800,000 new jobs with its tranche of the European Union’s 750-billion-euro rescue package.

The plan, focused on digital and green projects, aims to “transform the hard blow of the pandemic into an enormous opportunity,” said Prime Minister Pedro Sanchez.

Europe’s hospitality sector continues to bear some of the hardest impact, with British pub chain Greene King the latest to announce job cuts: 800 across its 2,700 pubs, restaurants and hotels.

Meanwhile, in the desperate hunt for effective treatments and vaccines, the latest sign of hope came from US biotech firm Eli Lilly, which said it was seeking an emergency use authorisation for its antibody treatments after early trial results showed they reduced viral load, symptoms and hospitalisation rates. 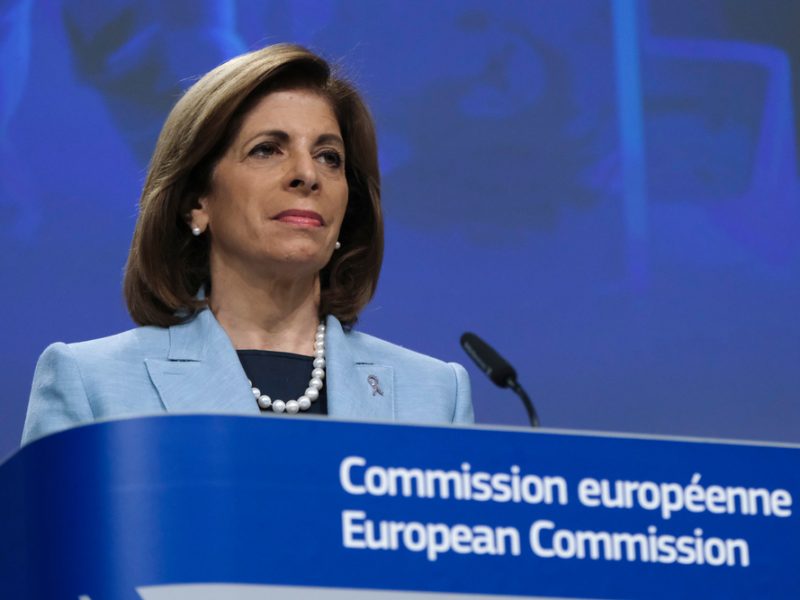 Commission tones down hopes for a COVID-19 vaccine soon

The European Commission is not able to say when a COVID-19 vaccine will be available, EU health chief Stella Kyriakides admitted on Thursday (24 September), even though a senior EU official voiced hope earlier this month that the first vaccine could have market authorisation as early as November.