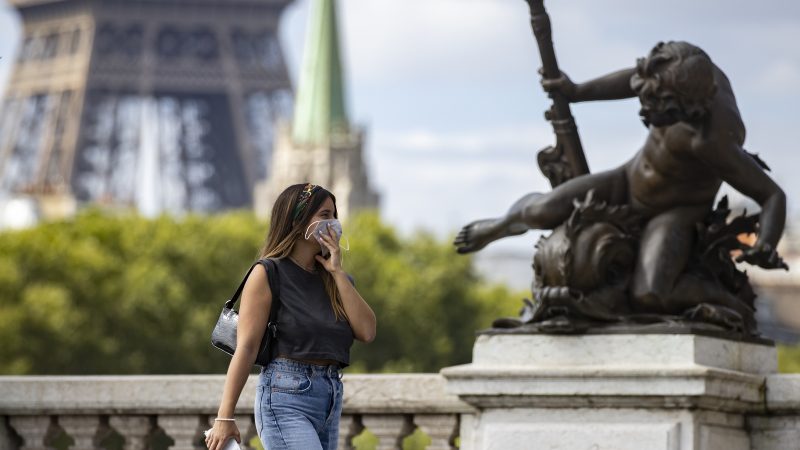 France expanded a mask-wearing order across the capital Paris and raised the number of regions in the “red zone” to 21 as new cases across the country tipped above 6,000.

Germany trailed a €50 fine for those caught without a mask where it is compulsory and said fans may have to stay away from sports stadiums until at least December.

Madrid said children as young as six will be required to cover their nose and mouth at Spanish schools, while Britain reversed earlier guidance that pupils aged 11-18 did not need to wear masks.

Countries worldwide are struggling to balance the need for populations to get back to work and study with keeping cases under control — fearing above all a return to draconian lockdowns.

The pandemic has killed more than 826,000 people worldwide since surfacing in China late last year, and more than 24 million infections have been recorded.

While travel has been blamed in part for the rise in cases in Europe, attempts to salvage at least some of the vital tourist trade were not enough for Paris.

“We have seen the pandemic shatter an extremely dynamic and flourishing sector,” Pécresse added.

The impact has been felt by global businesses tied to travel, with aircraft engine maker Rolls Royce losing £5.4 billion (€6 billion) in January-June, while Air New Zealand lost US$300 million (€253 million) over its full financial year.

Adding to a growing list of country-by-country travel restrictions, Britain said Thursday it would require arrivals from the Czech Republic, Switzerland and Jamaica to quarantine themselves from Saturday.

‘Should have ordered masks sooner’

Paris is one of the hardest-hit regions in France, where official figures released in France on Wednesday showed more than 5,400 confirmed new cases in just 24 hours — the highest level since May.

Sylvie Soufir argued that the government “should have (ordered mask-wearing) a long time ago” and Prime Minister Jean Castex has warned a new lockdown cannot be ruled out.

One of those French regions affected by tighter regulations includes Nice which hosts the start of the postponed Tour de France on Saturday.

Four members of the Lotto support team were sent home to self-isolate after positive pre-race tests.

In Brussels, meanwhile, European Commission trade boss Phil Hogan had to step down, faced with a public outcry after he admitted to breaching Ireland’s coronavirus restrictions.

Keeping mask-wearing and other restrictions in place, Rwanda has lengthened its evening curfew and restricted travel to the hard-hit Rusizi district.

Authorities blamed a recent spike in cases on complacency and fatigue with social distancing measures.

In South Korea, the parliament was shut down on Thursday and a group of lawmakers were in self-quarantine, as the country recorded more than 400 new coronavirus infections.

The United States, however, broke with the toughening trend even though it leads the world in virus deaths and infections.

US authorities now say asymptomatic people don’t need to test for COVID-19 if they have been exposed to someone diagnosed with the virus, with US media reporting the White House intervened to reverse previous recommendations.

President Donald Trump has long been accused by critics of trying to play down the scale of the pandemic and focus on economic recovery ahead of his re-election bid in November.

The World Health Organization (WHO) appeared to rebuff the US move by saying that people exposed to someone diagnosed with coronavirus should be tested whether they show symptoms or not.

“What is really important is that testing be used as an opportunity to find active cases so that they can be isolated and so that contact tracing can also take place,” said the WHO’s Covid-19 technical lead Maria Van Kerkhove.

“This is really fundamental to breaking chains of transmission.”

WHO also said it was setting up a committee to consider changing the rules on declaring an international health emergency, following criticism of its Covid-19 pandemic response.

New claims for jobless benefits in the US dropped to around one million in the week to August 22, official data showed Thursday, and economies have picked up generally since April-June albeit more slowly in recent days as cases rise again.