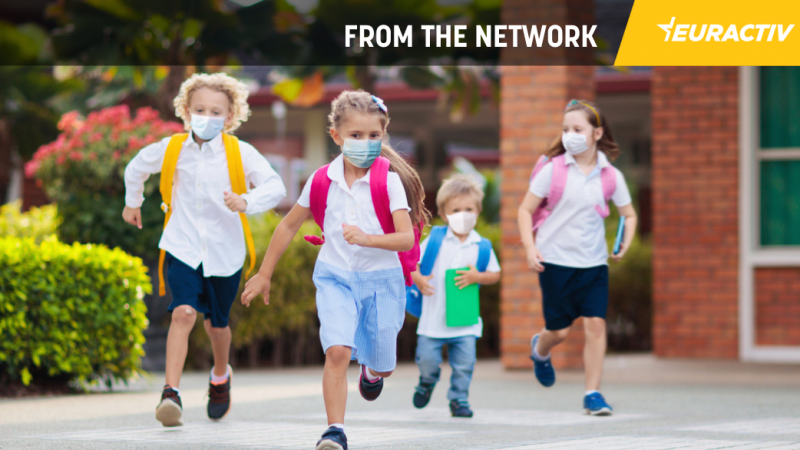 Most EU countries plan to open schools next week after the Christmas break amid the rapid spread of variant Omicron across the bloc.

But the measures taken by EU governments to combat the spread of the virus in educational institutions vary significantly. Most have taken a cautious approach by setting up automated mechanisms to shut classes if COVID-19 cases are reported. Some throw the ball to local authorities, while others do not take any measures at all.

Poland, Croatia and Greece have decided to take a higher risk, while Finland remains undecided on whether to open schools.

EURACTIV’s partner Slovenian New Agency (STA) reported that an entire class, vaccinated or not, is sent into quarantine if a single case is detected among children or their teacher in Slovenia.

Quarantine is currently ten days but will be shortened to seven next week. Students do rapid tests three times a week, provided by parents but done on school premises.

If one child is confirmed as being infected in the Czech Republic, the whole class will quarantine. Health offices assess the specific situation in each class and then decide accordingly.

It is up to schools to choose between rapid or PCR tests, given twice a week. As of 17 January, it will drop to one.

In Romania, classes shift to online if one case is detected among students. Face-to-face courses are resumed after eight days if all students test negative with PCR or antigen tests. Older children who are fully vaccinated can continue in-class studies. If more than half of the classes are shut down, the whole school switches to online.

In theory, students should take two rapid tests each week at home and provided by the government.

In Italy, after two reported cases in a class, unvaccinated students go into quarantine. After three cases, the whole class must quarantine.

Further changes have not been ruled out as schools’ principals want online lessons until the start of February while the government wants immediate return.

In Slovakia, if there is a positive student in the class, classmates must quarantine unless they are vaccinated or have recovered.

“Face masks will be compulsory from the first year of primary school, and parents are strongly advised to test their children before starting school and to repeat these tests twice a week,” the Ministry of Education stated.

In Spain, for three or more related positive cases, an outbreak is declared. The designated body in each Spanish region will then assess what measures will be taken.

No rapid tests are prescribed, and if a child gets COVID, their close contacts should get tested once and, if negative, another time after seven days.

In Poland, all classes were online a week before Christmas and a week after the New Year but the Education Ministry announced that from 10 January, all schools will restart no matter what.

There are no specific rules regarding closures, and the ministry asked schools to take necessary precautions to prevent the virus from spreading, placing the responsibility on headteachers. No rules regarding testing have been announced, either.

Unofficial sources told EURACTIV Poland that there was a clash between Education Minister Przemysław Czarnek, who wanted to reopen schools, and the Health Ministry, which considers the situation too bad for normal schooling to restart.

In Croatia, switching to online is up to school doctors. EURACTIV Croatia reports that the general idea is for schools to stay open even with half of the pupils attending classes.

In Portugal, schools reopen on 10 January. Students will no longer be obliged to isolate when there is a positive case in the same class, only students cohabiting with the infected.

In Greece, the government has decided to adopt the “50%+1” rule, which means a class should go into quarantine if half of the pupils are positive.

Scientists have criticised the decision, saying it poses a severe risk for a quick spread of COVID at schools. Greek media reported that the COVID committee was divided over the rule. Some members suggested reducing the current rate and closing a class when positive cases make up 30% or 40% of a class.

The rules for the operation of schools in Bulgaria have been liberalised, and the authorities said they would be closed as a last resort.

Students are tested bi-weekly, and those who do not want to, study remotely. Students who have a green certificate can go to school without being tested.

Throwing the ball to local level

In France, there is no national coordination on closing classrooms. A class would close before the Christmas holidays if three pupils were infected while with the new system, positive pupils must quarantine.

Others do a test, and if negative, they can go back to school. Local authorities are responsible for deciding whether a class should shut down due to high COVID cases.

Similarly, in Germany, rules differ among federal regions. The most common practice is daily mandatory rapid tests for students during the first week back, falling to three times a week after that. However, in some regions, such as Berlin and Thüringen, tests are not mandatory.

Rules also differ when it comes to shutting down classes. Baden-Württemberg has a rule that once 20% are positive within 10 days, class closure is “considered” by the local health authority.

In Finland, the debate is whether schools open at all on Monday or remain closed.

The Ministry of Social Affairs and Health proposed the semester begins with distance learning so that vaccination coverage can be improved. The Ministry of Education, Health and Safety authorities, and Student’s Union oppose the proposal.

The Teachers’ Union wants to see school doors closed while parents are divided. The government is expected to decide on Friday.