‘Grave concern’ over COVID in Europe as German cases soar 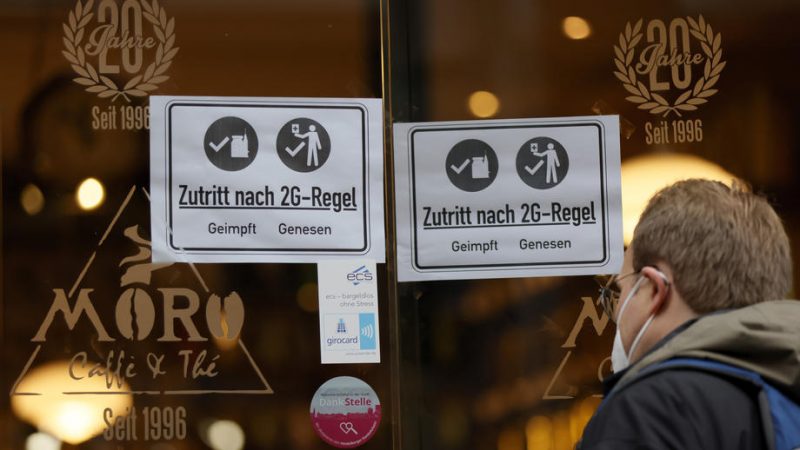 An information sign with letters "Access according to 2G rule (vaccinated-recovered) on a window at a cafe in the old town of Heidelberg, Germany, 4 November 2021. Due to an increasing number of cases of the pandemic COVID-19 disease caused by the corona virus SARS CoV-2, new nationwide restrictions have been announced to counter a surge in infections. [EPA-EFE/RONALD WITTEK]

The World Health Organization expressed “grave concern” Thursday (4 November) over the rising pace of coronavirus infections in Europe, as Germany registered its biggest daily increase since the start of the pandemic.

“We are, once again, at the epicentre,” WHO Europe director Hans Kluge told a press conference.

He warned that according to “one reliable projection” the current trajectory would mean “another half a million COVID-19 deaths” worldwide by February.

Alarm bells were ringing especially in Germany, the European Union’s most populous country, where the number of new cases over the past 24 hours soared to almost 34,000 on Thursday — an all-time high, according to the Robert Koch Institute health agency.

Meanwhile Britain on Thursday became the first country in the world to approve the use of Merck’s anti-COVID pill to treat patients suffering from mild to moderate coronavirus infections.

Health minister Sajid Javid called the molnupiravir antiviral “a game-changer for the most vulnerable and the immunosuppressed”.

German Health Minister Jens Spahn said on Wednesday that the country of 83 million people was facing a “massive” pandemic among the unvaccinated and that intensive care beds were starting to run out in some regions.

“Corona is once again raging with full force, the fourth wave is hitting us hard,” the top-selling Bild daily wrote.

The WHO’s Europe region — which spans 53 countries and territories and includes several nations in Central Asia — has now recorded 78 million cases since COVID-19 first emerged in China in late 2019.

The cumulative figure exceeds that of South East Asia, the Eastern Mediterranean region, the Western Pacific, and Africa combined, the organisation said.

The “current pace of transmission” across the European region “is of grave concern”, Kluge said.

The WHO blamed a combination of insufficient vaccination rates and a relaxation of preventative measures like mask-wearing and social distancing.

Over the past seven days, Russia — a country with strong vaccine hesitancy — has led the rise with 8,162 deaths, followed by Ukraine with 3,819 deaths and Romania with 3,100 deaths, according to the data.

Globally, the virus has killed more than five million people, while the overall caseload has topped 248 million.

The WHO estimates however that the pandemic’s real toll could be two to three times higher than official records, due to the excess mortality that is directly and indirectly linked to COVID-19.

Although Germany was initially praised for its handling of the pandemic, the rapid uptick in cases and sluggish uptake in vaccinations among adults has led to mounting concern.

Despite vaccines being widely available, just 66.9 of the German population was fully inoculated as of Thursday, according to official figures.

The COVID surge comes as Germany is in political limbo following a September general election with the winning Social Democrats hoping to have a new coalition government in place by early December.

Outgoing Chancellor Angela Merkel has called Germany’s coronavirus trend “very worrying” and signalled that she is in favour of tougher curbs targeting the unvaccinated.

Health Minister Spahn too has called for stricter measures, including more thorough checks at establishments and events where people need to show proof of vaccination, recovery from COVID or a recent negative test before entering.

He has also urged all vaccinated Germans to get booster shots after six months.

Under Germany’s federal system, regional states have significant powers to decide their own COVID approach, at times leading to a confusing patchwork of regulations.

The health ministers of all 16 states were holding crisis talks on Thursday and Friday to discuss the next steps.

The states of Baden-Wuerttemberg, Saxony and Bavaria have already agreed or introduced harsher restrictions, including rules excluding the unvaccinated from bars or nightclubs.