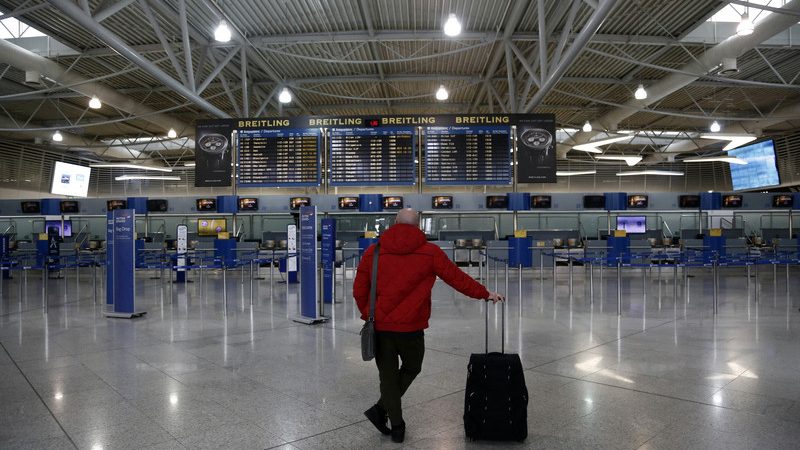 Specific cargo flights will be excluded from the ban, especially the ones related to essential products. [EPA/ YANNIS KOLESIDIS]

The Greek government is seriously considering temporarily banning all foreign flights as of 22 March to halt the spread of the coronavirus, Greek media reported on Thursday (19 March).

Greek media quoted high-ranking government sources as saying that Athens is seriously looking into the scenario of banning all foreign flights and should officially confirm within hours, while no decision has yet been made about domestic flights.

Specific cargo flights will be excluded from the ban, especially the ones related to essential products.

Greece has reported nearly 1,500 coronavirus cases and six deaths so far and it is estimated that the number will increase further in the coming days.

The side effects of this measure will be severe as many Greeks are trapped in foreign and non-EU countries and will not be able to return to Greece before Sunday.

Meanwhile, Fofi Gennimata, leader of the opposition Pan-Hellenic Socialist Movement (Pasok), told Greek lawmakers earlier today she had been informed that a number of Italian tourists have travelled to several Greek islands in recent days.

“I received a complaint from a mayor that tourists from Italy are arriving in the islands of the Aegean. How did they get there? Why didn’t anyone stop them? How will we deal with that without doctors? The matter is critical,” she said.

The implications of the coronavirus pandemic on Greek tourism, the country’s key industry, are expected to be enormous and are already causing policymakers a headache.

Greek Prime Minister Kyriakos Mitsotakis is going to make a televised speech later on Thursday, focusing on measures to mitigate the economic impact of the coronavirus.