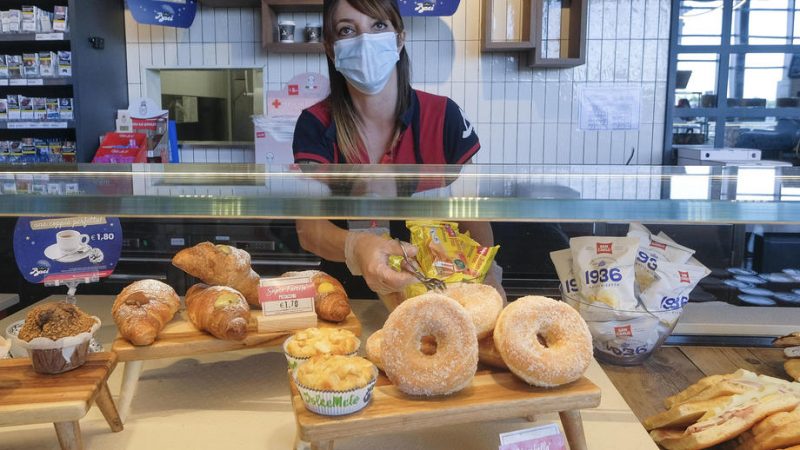 As from today (4 May), over 4 million Italians go back to work after the decision to ease the lockdown announced on Sunday (26 April). [EPA-EFE/FASANI]

More than 4 million Italians are going back to work on Monday (4 May) amid continued uncertainty over which activities are allowed and which ones are forbidden in the so-called ‘phase two’ of Italy’s fight against the pandemic.

After having experienced Europe’s longest lockdown, Italy is gradually starting to lift restrictive measures against the coronavirus after a decision to ease the lockdown was announced on 26 April.

As of today, businesses in the building sector and wholesale trade will resume activities, while restaurants may reopen for takeaway service only.

While a ban on all public gatherings is maintained, people are from now on allowed to visit relatives in small numbers, and burial ceremonies can be held with a maximum of 15 people attending.

The country thus kicks off what the government calls the ‘phase two’ of its battle against COVID-19, which aims to create the conditions to live with the virus until a vaccine or cure is available for use.

“Many companies and factories will start up again and there will be far more opportunities for contagion, which we can only avoid through an even greater sense of responsibility,” said Italy’s Prime Minister Giuseppe Conte.

On the eve of phase two, the country recorded its seven-week low in the increase of daily fatalities, confirming a downward trend observed in the number of active cases which has now fallen to 100,179.

“As never before, the future of the country will be in our hands. The more scrupulous we are, the sooner we can regain other areas of freedom,” said Conte, calling on the population not to squander what they have “laboriously earned.”

However, the lack of clarity in the technical jargon used in the decree that lifted some restrictive measures drew much criticism, forcing the government to release a set of new guidelines on Saturday (2 May).

For over a week, Italians have been puzzled by the meaning of ‘congiunti’, a vague and old-fashioned word used in the decree to describe the relatives that people are allowed to visit during ‘phase two’ of Italy’s fight agains the pandemic.

According to the guidelines, the word means relatives but also those with whom one has stable emotional relations, which is open to interpretation.

For the Interior Ministry, the evaluation of individual travels should be conducted by officers on a case by case basis, which leaves a great degree of discretion in the implementation of the measures.

The guidelines didn’t clear up confusion either on whether people are allowed to go out for a walk. Walks seem approved only if necessary to reach the workplace, visiting relatives, carrying out individual sports, taking children to the park, or for health reasons.

Public transport is another sticky point of Italy’s plan to get back to normal. In a letter to Transport Minister Paola De Micheli, two organisations representing public transport companies stressed that the Italian transport system is unable to meet the social distancing requirements imposed by the government.

According to the associations, the minimum distance of 1 metre imposed between passengers limits the transport system to 25-30% of its normal capacity, which could generate overcrowding at bus stops and train stations.

In its upcoming stimulus package, the government is preparing a bonus of €200 for those who want to buy a bike or electric scooter or use a car-sharing service, in order to relieve public transport during peak time.

The fate of schoolchildren is also uncertain, with Conte confirming it is highly likely that schools will remain closed until the end of the school year.

“It’s very complicated to combine the right to education with health protection,” he said.

The reason is the “very high risk” of triggering a second wave of contagion if schools reopen at this stage, as “all the studies tell us that we will have a new outbreak within a week or two.”

In a TV interview, Education Minister Lucia Azzolina said that the government is considering a “mixed” system with half of the teaching taking place at school and the other half taking place at home using distance learning applications.