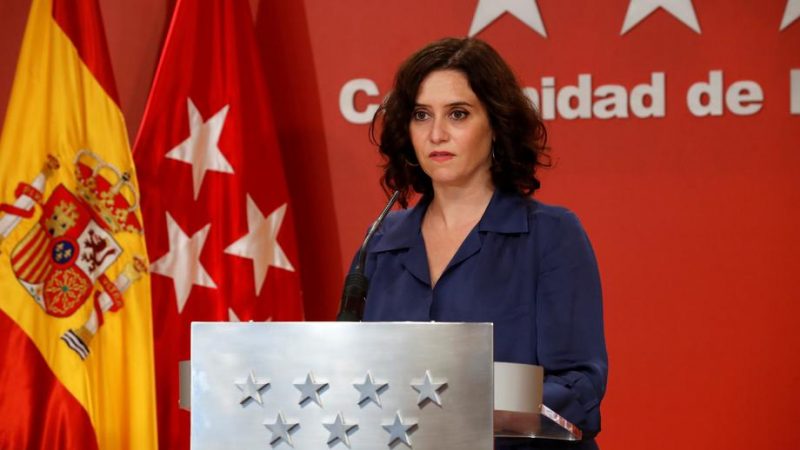 The regional high court in Madrid on Thursday (8 October) struck down government restrictions that sealed off the Spanish capital and nine of its satellite cities in a bid to curb soaring COVID-19 infection rates, saying the move lacked legal underpinning and breached residents’ “fundamental rights.”

The ruling, which is the result of an appeal lodged by regional authorities in Madrid, comes as cities across Europe re-impose restrictions to get a handle on a second wave of the pandemic.

Madrid’s regional leader, Isabel Díaz Ayuso of the conservative Popular Party, offered to sit down with the national government to draw up a new set of “sensible” measures overnight so that they would be clear before the upcoming bank holiday weekend in Spain.

She said the travel restrictions around the city limits of the capital and the affected suburbs would be lifted to “avoid more confusion” but asked residents not to travel during the holiday weekend.

Ayuso had been opposed to a city-wide lockdown of the capital, claiming it would only serve to further damage the local economy.

Her government had enforced isolated lockdowns on neighbourhoods with high infection rates, which predominantly affected lower-income and densely populated areas of the city’s south.

Addressing the media during a visit to Algeria, Spain’s Socialist Party (PSOE) Prime Minister Pedro Sánchez said the government would study all resources to address the situation in Madrid, which is leading the second wave of the pandemic in Europe.

“We consider the figures in the Community of Madrid and the evolution of the pandemic to be a concern and, in response, we have to put all measures on the table to flatten the curve,” he said.

He added that enacting a state of alarm, the emergency mechanism that underpinned Spain’s draconian lockdown between mid-March and June, would always be considered as part of a possible response.

At the end of the state of alarm, and upon the request of many local governments and opposition parties, Sánchez handed the keys to the country’s coronavirus response down to the regional governments.

At odds over how to best contain the spread of COVID-19 in the capital, the central government overrode the Madrid government to impose new lockdown criteria last week.

But the Madrid High Court Judges on Thursday said the restrictions lacked a sufficient legal basis. “If the justice system tells us that this mechanism is not correct, then it will have to be another, we will have to evaluate it with the Community of Madrid and take appropriate action,” Sánchez added.

The government restrictions, introduced on 2 October, meant around 4.5 million people living in Madrid and the affected satellite cities could no longer leave their municipalities to save for essential reasons and had to cap social gatherings at six people.

Restaurants and bars in the affected were ordered to close at 11pm, the tail-end of dinner time in Spain. The decision from the court means police can no longer levy fines on those who breach them.

The Spanish capital is once again a COVID-19 hotspot in Europe, with some areas reporting a 14-day cumulative incidence rate of over 700 infections per 100,000 inhabitants, more than twice the national average.

Madrid’s incidence rate is higher than the 500 per 100,000 reported in the Belgian capital Brussels, where officials this week announced the closure of all bars and cafes for a month. Similar measures are being taken in parts of France and Scotland.

But Spain’s coronavirus response has been severely hampered by political bickering, which is rife due to the country’s decentralised system.

The back and forth in Madrid is nurtured by animosity between the regional government, in the hands of the PP and the centre-right Ciudadanos with the support of the far-right Vox, and the national government, a coalition led by the PSOE with junior partners Unidas Podemos, a left-wing group.

The country’s Health Minister Salvador Illa, a proponent of the tougher measures in Madrid, on Thursday said he had called a meeting with city officials to analyse the court’s ruling.

“We always think first about the nurses, the families and the health workers. From there, and guided by the experts who advise us, we will adopt legal decisions that offer better health protection,” Illa said.

Ayuso’s government initially agreed with the health ministry’s lockdown criteria but later back-tracked and voted against it.

The criteria obliged local authorities to trigger a partial lockdown in municipalities with a 14-day COVID-19 incidence rate of more than 500 per 100,000, a test positivity rate of over 10%, and where 35% of ICU beds taken by coronavirus patients.

Spain has been one of Europe’s hardest-hit countries during the pandemic with an overall caseload of nearly 836,000, with 10,000 new infections being reported on average each day — the majority in Madrid.