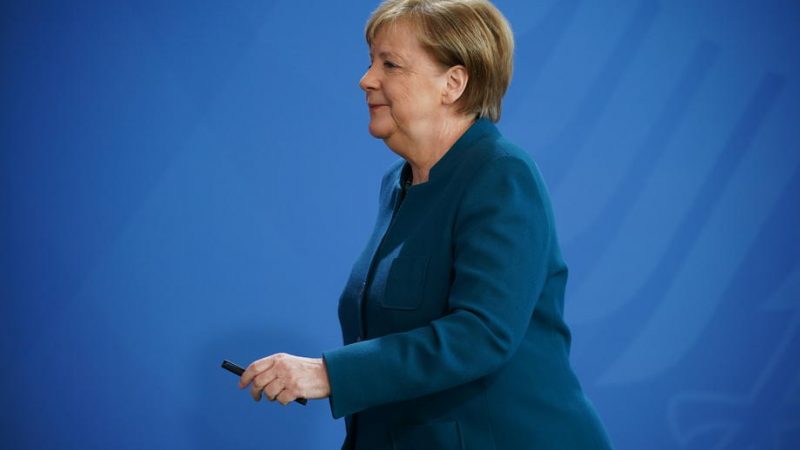 Updated with result of coronavirus test

“After today’s press appearance, the Chancellor was informed that a doctor who had given her a prophylactic pneumococcal vaccination on Friday afternoon has now tested positive for the coronavirus,” read the statement by spokesperson Steffen Seibert.

“As a result, the Chancellor has decided to move immediately into domestic quarantine. She will have herself tested regularly over the next few days because a test would not be fully conclusive at this point. The Chancellor will also continue her official business from home quarantine.“

On Monday (23 March), Merkel’s office confirmed that a test for coronavirus had come back negative.

Merkel, who will be quarantined for two weeks, presented a new agreement between the federal government and the representatives of Germany’s 16 states, or Länder.

All public gatherings of more than two people not living in the same residence are now forbidden while going outside for essential services such as going to the supermarket, helping others, or exercising individually remains allowed, provided that people maintain at least 1.5m distance between each other.

The new rules go into effect on Monday until at least the end of the Easter holidays.

Additional restrictions will include closing all personal hygiene business such as hair salons and tattoo studios, which had remained open under previous agreements. Restaurants and pubs will close except for delivery and takeaway options.

“It is most important that the new distance regulations are observed,” Merkel said. “With a certain distance, the risk of infection is reduced almost to zero,” she continued.

It makes a “huge difference” whether a half meter or one and a half meter distance is observed. “Everyone should organise their movements and their lives for the next few weeks according to these clear guidelines.”

The news of Merkel having to go into quarantine came amid confusion on the number of infected people in Germany.

The Robert Koch-Institut, the institute that delivers the official data in Germany, reported on Sunday that there were 18,610 infected persons in the country. However, the day before, there had already been reports that the number had exceeded the 20,000 mark. These figures were published by the Johns Hopkins University.

“During the weekend, data was not transmitted from all offices, so that the increase in case numbers reported here does not correspond to the actual increase in case numbers. The data will be submitted on Monday and will also be avail[able in these statistics from Tuesday onwards”, the Robert-Koch-Institut stated on its website.