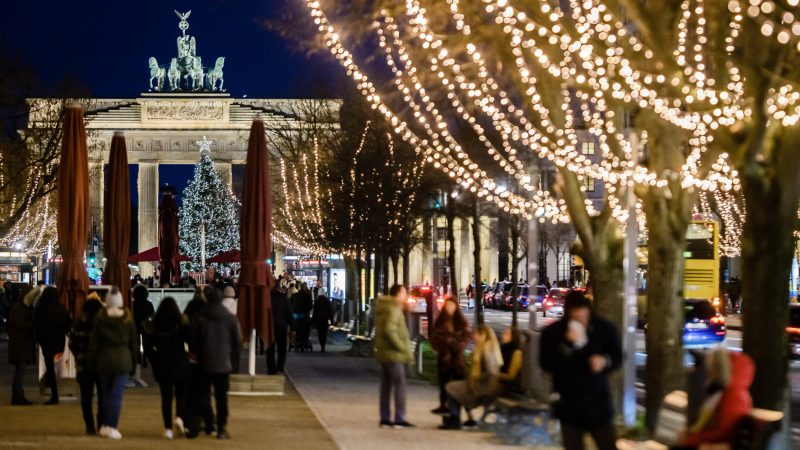 Passers-by stand in front of the Christmas tree and the Brandenburg Gate underneath Christmas illumination in Berlin, Germany, 29 November 2020. [Clemens Bilan/EPA/EFE]

Chancellor Angela Merkel said on Monday (30 November) that Germany could face a third wave of coronavirus infections if citizens are careless in the coming weeks.

Germany’s number of new infections has stabilized at a high level since a partial lockdown was imposed on 2 November to contain a second wave of coronavirus infections. But officials have said that progress was still fragile.

“We’ll have to be very, very careful during the winter,” Merkel said in a virtual panel discussion with police officers. “Otherwise we’ll end up directly in the next wave.”

Merkel also railed against plans of some regional governments to let hotels open for family visits over Christmas, warning it risked worsening the coronavirus surge sweeping Germany, participants in a party meeting said.

Infection levels rose overnight compared to the same time last week, despite the partial lockdown introduced for November and since extended and tightened in an attempt to control the spread of the virus.

Merkel and state premiers agreed last week that some partial easing of the lockdown would be allowed to allow families some low-key Christmas celebrations.

But in a video conference of her conservative party’s top leadership on Monday, Merkel said she could not understand the plans of some northern and western states, where the epidemic is less severe, to allow hotels to open to allow far-flung families to get together.

Though Germany has already mobilised government aid to help support the economy through the pandemic, ministers said on Monday that nothing could fully spare companies from the impact.

“People have to show discipline,” economy minister Peter Altmaier, the architect of the economic response to the pandemic told Deutschlandfunk radio. “We have to do more to reduce social contacts.”

Altmaier added that pandemic aid for companies could not be extended indefinitely.