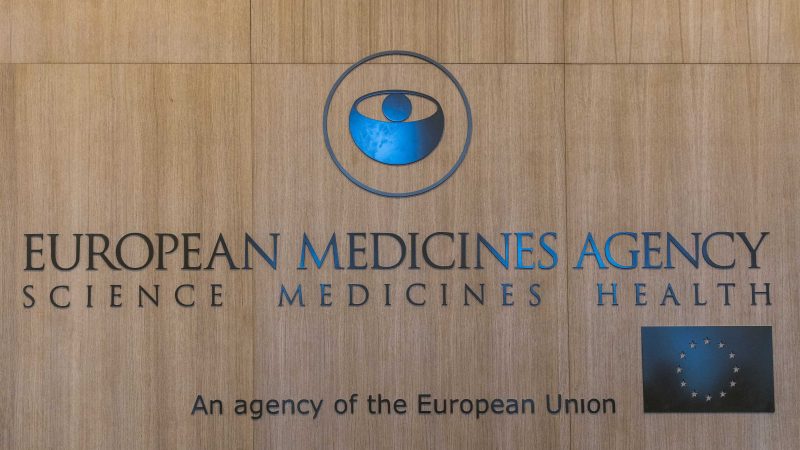 The name and logo of European Medicines Agency (EMA) is seen in their new building in Amsterdam, The Netherlands, 15 November 2019. [Lex Van Lieshout/EPA/EFE]

Hospitals in the European Union are facing shortages of critical drugs to treat COVID-19 patients because of trade restrictions and excessive stockpiling by EU governments, EU and industry officials said on Monday (6 April).

Despite several calls for solidarity, many of the 27 EU nations have resorted to protectionist measures during the coronavirus outbreak, restricting sales of essential products, such as medicines, face masks and medical devices.

“Some EU member states have indicated that they are starting to see shortages of certain medicines used for patients with COVID-19 or are expecting such shortages to occur very soon,” the European Medicines Agency said in a statement.

Shortages mostly concern drugs used for patients with the most serious complications caused by the new coronavirus infection.

These include medicines used in intensive care units such as anaesthetics, antibiotics and muscle relaxants that allow patients to receive breathing support from ventilators.

Last week a group of large European hospitals, including Milan’s San Raffaele and Barcelona’s Vall d’Hebron, said they would shortly no longer be able to treat COVID-19 patients if restrictions on drug movements were not removed.

At the beginning of the outbreak, the bloc faced delays in the delivery of medicines caused by supply disruption in China and trade bans in India, but now the main hurdles to supplies are due to EU states themselves, industry officials said.

“Countries are building up stocks. This is a reasonable approach but stocks are sometimes too big and this will deprive countries in need to get them,” said Adrian van den Hoven, director of Medicines for Europe, a trade body for the EU generic drugs industry.

He said in one case that a drug order from a state, which he did not name, covered the yearly output of a manufacturer.

“This is not rationale, and is not limited to one country,” he said.

Austria and Portugal are among EU states that are excessively stockpiling, said Kasper Ernest, secretary general of Affordable Medicines Europe, the trade body for pharmaceutical wholesalers.

Many countries have also restricted the export of drugs that are deemed essential during the epidemic. Under some of these curbs, only when national needs are fulfilled, medicines can be exported. The restrictions hit mostly distributors.

The European Commission, the EU executive arm, is probing the legality of measures adopted by France, Poland, Hungary, Romania and Slovakia, a spokeswoman for the EU commission said on Monday, adding that trade restrictions also apply to medical gear and devices.

“In a period when we are focused on saving lives, it is not the time to restrict exports of medicines and essential medical equipment, nor to let them expire rather than share,” EU health commissioner Stella Kyriakides said.

Today reiterated my call to 🇪🇺 Health Ministers for the immediate removal of export restrictions on medicines, protective equipment and food. We will closely monitor this. Saving lives should be everyone’s priority. We need to tackle #COVID19 together.

Trade restrictions imposed by Romania are for instance currently blocking a large shipment of heart medication which was meant to reach patients in Hungary and Montenegro, Ernest said, warning that the drugs will soon expire.