Pass the salt: how coronavirus came to Germany, and how it was traced 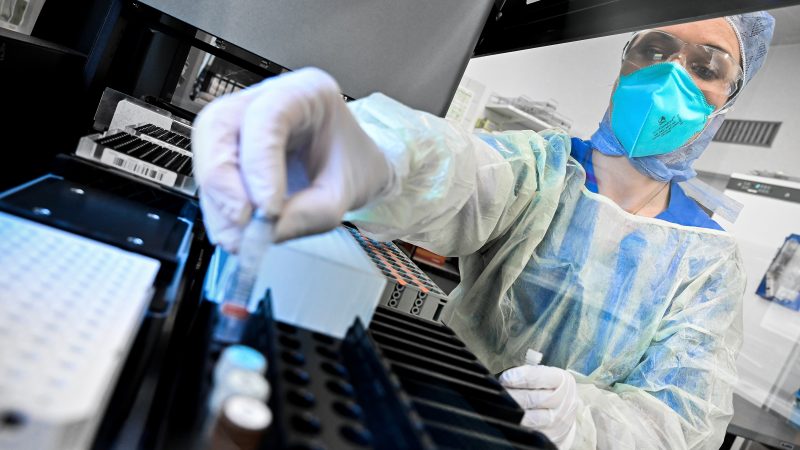 A molecular geneticist in protective clothing runs a test for SARS-CoV-2 coronavirus which causes the COVID-19 disease in a hospital lab in the Rhineland Region, Germany, 1 April 2020. [Sascha Steinbach/EPA/EFE]

One January lunchtime in a car parts company, a worker turned to a colleague and asked to borrow the salt. As well as the saltshaker, in that instant, they shared the new coronavirus, scientists have since concluded.

That their exchange was documented at all is the result of intense scrutiny, part of a rare success story in the global fight against the virus.

The co-workers were early links in what was to be the first documented chain of multiple human-to-human transmissions outside Asia of COVID-19, the disease caused by the coronavirus.

They are based in Stockdorf, a German town of 4,000 near Munich in Bavaria, and they work at car parts supplier Webasto Group. The company was thrust under a global microscope after it disclosed that one of its employees, a Chinese woman, caught the virus and brought it to Webasto headquarters. There, it was passed to colleagues – including, scientists would learn, a person lunching in the canteen with whom the Chinese patient had no contact.

The 22 January canteen scene was one of dozens of mundane incidents that scientists have logged in a medical manhunt to trace, test and isolate infected workers so that the regional government of Bavaria could stop the virus from spreading.

That hunt has helped Germany win crucial time to build its COVID-19 defences.

The time Germany bought may have saved lives, scientists say. Its first outbreak of locally transmitted COVID-19 began earlier than Italy’s, but Germany has had many fewer deaths. Italy’s first detected local transmission was on 21 February. By then Germany had kicked off a health ministry information campaign and a government strategy to tackle the virus which would hinge on widespread testing. In Germany so far, more than 2,100 people have died of COVID-19. In Italy, with a smaller population, the total exceeds 17,600.

“We learned that we must meticulously trace chains of infection in order to interrupt them,” Clemens Wendtner, the doctor who treated the Munich patients, told Reuters.

Wendtner teamed up with some of Germany’s top scientists to tackle what became known as the ‘Munich cluster,’ and they advised the Bavarian government on how to respond. Bavaria led the way with the lockdowns, which went nationwide on 22 March.

Scientists including England’s Chief Medical Officer Chris Whitty have credited Germany’s early, widespread testing with slowing the spread of the virus. “‘We all know Germany got ahead in terms of its ability to do testing for the virus and there’s a lot to learn from that,’” he said on TV earlier this week.

Christian Drosten, the top virologist at Berlin’s Charite hospital, said Germany was helped by having a clear early cluster. “Because we had this Munich cohort right at the start … it became clear that with a big push we could inhibit this spreading further,” he said in a daily podcast for NDR radio on the coronavirus.

Drosten, who declined to be interviewed for this story, was one of more than 40 scientists involved in scrutiny of the cluster. Their work was documented in preliminary form in a working paper at the end of last month. The paper, not yet peer-reviewed, was shared on the NDR site.

It was on Monday, 27 January, that Holger Engelmann, Webasto’s CEO, told the authorities that one of his employees had tested positive for the new coronavirus. The woman, who was based in Shanghai, had facilitated several days of workshops and attended meetings at Webasto’s HQ.

The woman’s parents, from Wuhan, had visited her before she travelled on 19 January to Stockdorf, the paper said. While in Germany, she felt unusual chest and back aches and was tired for her whole stay. But she put the symptoms down to jet lag.

She became feverish on the return flight to China, tested positive after landing and was hospitalised. Her parents also later tested positive. She told her managers of the result and they emailed the CEO.

In Germany, Engelmann said he immediately set up a crisis team that alerted the medical authorities and started trying to trace staff members who had been in contact with their Chinese colleague.

The CEO himself was among them. “Just four or five days before I received the news, I had shaken hands with her,” he said.

Now known as Germany’s “Case #0,” the Shanghai patient is a “long-standing, proven employee from project management” who Engelmann knows personally, he told Reuters. The company has not revealed her identity or that of others involved, saying anonymity has encouraged staff to co-operate in Germany’s effort to contain the virus.

The task of finding who had contact with her was made easier by Webasto workers’ electronic calendars – for the most part, all the doctors needed was to look at staff appointments.

“It was a stroke of luck,” said Wendtner, the doctor who treated the Munich patients. “We got all the information we needed from the staff to reconstruct the chains of infection.”

For example, case #1 – the first person in Germany to be infected by the Chinese woman – sat next to her in a meeting in a small room on 20 January, the scientists wrote.

Where calendar data was incomplete, the scientists said, they were often able to use whole genome sequencing, which analyses differences in the genetic code of the virus from different patients, to map its spread.

By following all these links, they discovered that case #4 had been in contact several times with the Shanghai patient. Then case #4 sat back-to-back with a colleague in the canteen.

When that colleague turned to borrow the salt, the scientists deduced, the virus passed between them. The colleague became case #5.

Webasto said on Jan. 28 it was temporarily closing its Stockdorf site. Between 27 January and 11 February, a total of 16 COVID-19 cases were identified in the Munich cluster. All but one were to develop symptoms.

All those who tested positive were sent to hospital so they could be observed and doctors could learn from the disease.

Bavaria closed down public life in mid-March. Germany has since closed schools, shops, restaurants, playgrounds and sports facilities, and many companies have shut to aid the cause.

This is not to say Germany has defeated COVID-19.

Its coronavirus death rate of 1.9%, based on data collated by Reuters, is the lowest among the countries most affected and compares with 12.6% in Italy. But experts say more deaths in Germany are inevitable.

The difference between Germany and Italy is partly statistical: Germany’s rate seems so much lower because it has tested widely. Germany has carried out more than 1.3 million tests, according to the Robert Koch Institute. It is now carrying out up to 500,000 tests a week, Drosten said. Italy has conducted more than 807,000 tests since 21 February, according to its Civil Protection Agency. With a few local exceptions, Italy only tests people taken to hospital with clear and severe symptoms.

Germany’s government is using the weeks gained by the Munich experience to double the number of intensive care beds from about 28,000. The country already has Europe’s highest number of critical care beds per head of the population, according to a 2012 study.

Even that may not be enough, however. An Interior Ministry paper sent to other government departments on March 22 included a worst-case scenario with more than 1 million deaths.

Another scenario saw 12,000 deaths – with more testing after partial relaxation of restrictions. That scenario was dubbed “hammer and dance,” a term coined by blogger Tomas Pueyo. It refers to the ‘hammer’ of quick aggressive measures for some weeks, including heavy social distancing, followed by the ‘dance’ of calibrating such measures depending on the transmission rate.

The German government paper argued that in the ‘hammer and dance’ scenario, the use of big data and location tracking is inevitable. Such monitoring is already proving controversial in Germany, where memories of the East German Stasi secret police and its informants are still fresh in the minds of many.

A subsequent draft action plan compiled by the government proposes the rapid tracing of infection chains, mandatory mask-wearing in public and limits on gatherings to help enable a phased return to normal life after Germany’s lockdown. The government is backing the development of a smartphone app to help trace infections.

Germany has said it will re-evaluate the lockdown after the Easter holiday; for the car parts maker at the heart of its first outbreak, the immediate crisis is over. Webasto’s office has reopened.

All 16 people who caught COVID-19 there have recovered.