O'Connor said Europe has failed so far to grasp and understand that the risk averse approach to proper investment in creating the necessary infrastructure for full digitisation has “now come back to bite us”. [European Connected Health Alliance]

This article is part of our special report Europe’s health after COVID-19.

The COVID-19 pandemic has reminded Europe that its piecemeal approach to investing in the digitisation of health systems comes at a cost, but not all countries and policymakers have yet learned the lesson, the chairman of the European Connected Health Alliance told EURACTIV.

Brian O’Connor said Europe has so far failed to see that its risk-averse approach to proper investment in creating the necessary infrastructure for full digitisation has “now come back to bite us”.

Stakeholders across Europe say the pandemic has offered policymakers a number of lessons to be learned, especially regarding the modernisation of health systems.

The pandemic, which hit Europe after the continent went through years of austerity-driven policies, exposed the severe shortcomings in the healthcare sector, particularly at its outset.

Lives, money could have been saved

For O’Connor, a fully digitised health sector would have saved lives and enabled whole populations to get accurate information based on real data rather than have to rely on often conflicting opinions.

“It would have enabled different decisions to be taken not only on health and care matters but economic decisions based on facts and not best guesses,” he emphasised.

“It would have given confidence to citizens, knowing that the data and evidence existed and encouraged them to work in partnership with the authorities instead of second-guessing lockdown and other restrictions,” O’Connor added.

O’Connor, who has personally invested in the healthcare services area in the UK, Ireland and Hong Kong, noticed that in some countries which already had a high degree of digital connectivity, data laws regulation, and, most importantly, the trust of their citizens, the number of deaths and cases was significantly lower than in many others.

“Finland and Estonia spring to mind, but there are others who have coped better because they invested over many years in digitisation,” he said.

In some countries, he said, hospitals are perhaps the most digitised institutions, but there was still room for improvement.

“Even then, we still see too many systems which can’t share data within the same hospital.”

In an open letter published on Monday (14 September), 71 EU lawmakers called on the EU to take a coordination role and rapidly adopt a common methodology for health data collection.

This is in line with the EU pharma industry’s long-standing push for national but interoperable Electronic Health Records.

In an interview with Greece’s MEGA TV channel, Nathalie Moll, the director-general of the European Federation of Pharmaceutical Industries and Associations (EFPIA), voiced regret for the lack of common standards to measure healthcare outcomes, especially during the COVID-19 pandemic.

“We could not even compare mortality rates between member states because they were using different data collection standards. Mortality rate is a very basic healthcare outcome,” she said. 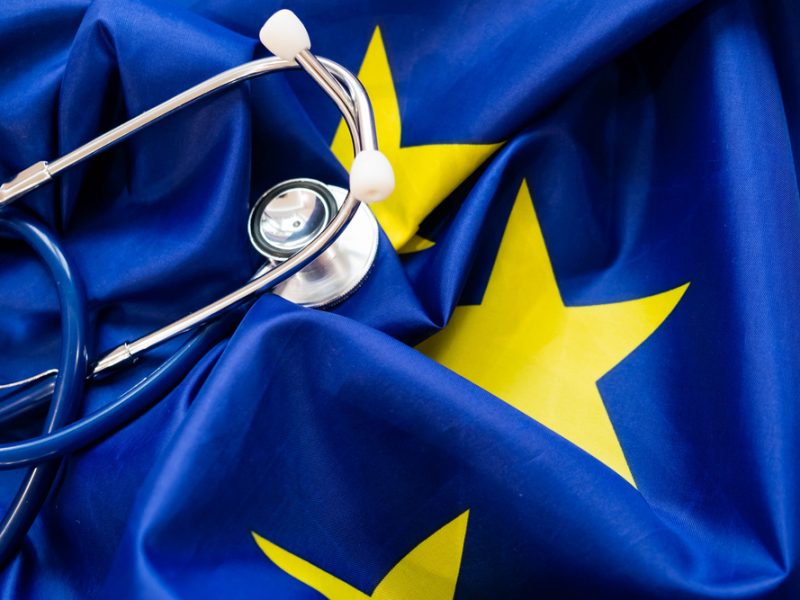 Many EU countries are now experiencing the second wave of the COVID-10 pandemic and it seems that the lack of Europe-wide coordination that marked the first wave is still there.

A wake-up call for member states?

Public pressure to re-design health systems is now mounting and many see the recently adopted EU Recovery Fund as a great opportunity to do so. However, it is still uncertain if policymakers and stakeholders will now see the long-term advantages of a fully digitised health sector.

Asked if COVID-19 could change member states’ mindset, O’Connor replied: “I think there is Before Covid and After Covid. Before, the majority didn’t grasp it. After, more do but still not all.”

“Some see COVID-19 as a wake-up call to build the necessary infrastructure to deal with today’s pandemic but also to vastly improve existing health services,” he added.

O’Connor explained that there are some countries that have made more progress in six months than in 20 years by “taking action based on the best info available, by setting aside procurement laws, by invoking emergency legislation and above all involving all the silos”.