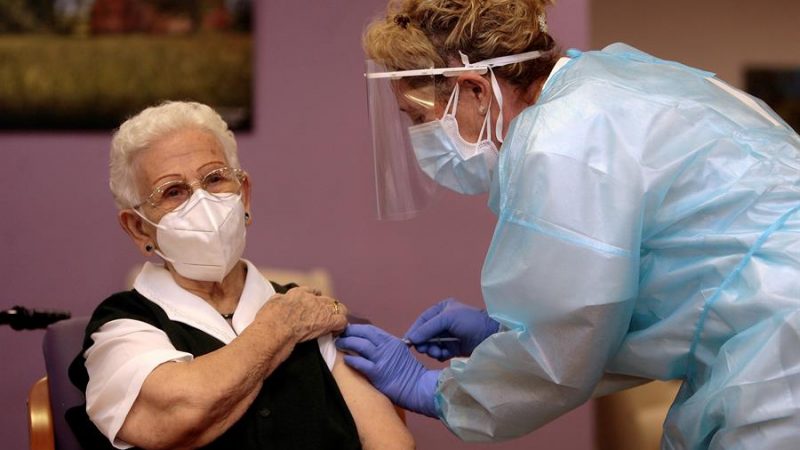 Araceli, a 90-year-old woman, was the first Spanish citizen to be vaccinated in December 2020. [EFE/Pepe]

Spanish Prime Minister Pedro Sánchez has set the new goal of having 90% of the population fully vaccinated against COVID-19 as soon as possible, but has not set a deadline for when the target should be met, EURACTIV’s partner EFE reports.

Sánchez announced the goal during a political event on Thursday (2 September) in the central-eastern Guadalajara province, where he spoke of the country’s “collective success” during the vaccination effort.

In a nursing home in the city of Guadalajara, Spain’s first COVID-19 vaccine was given on 27 December, 2020.

Already a milestone, but not enough to achieve herd immunity

The announcement came the day after Spain hit the milestone of having fully vaccinated more than 70% of its entire population, or some 33.3 million people, health ministry data showed – a target initially set for 18 August.

Ten of Spain’s autonomous regions had already surpassed the vaccination of over 70% of its population, including Galicia, Andalusia and the Basque country among others.

However, experts have warned that 70% is not enough to achieve herd immunity, which will only be achieved with 90% of the population being fully vaccinated.

This figure can only be reached once the European Medicines Agency (EMA) authorises children under 12 years old, who account for 11% of Spain’s population, to receive the vaccine.