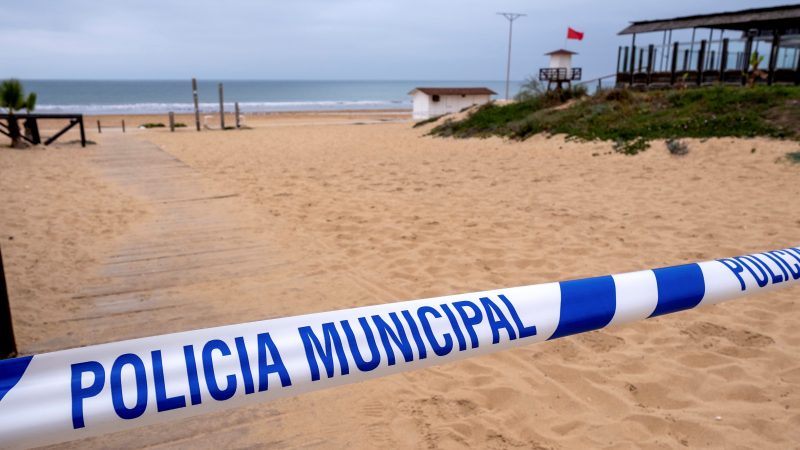 View of a closed beach in Punta Humbria, Huelva, Spain, 14 March 2020, as the Spanish Government declared the alarm status in an attempt to refrain the coronavirus spread. [Julian Perez/EPA/EFE]

Spain put its 47 million inhabitants under partial lockdown on Saturday as part of a 15-day state of emergency to combat the coronavirus epidemic in Europe’s second worst-affected country by the disease after Italy.

Effective immediately, all Spaniards must stay home except to buy food, medicines, go to work or to the hospital or for emergencies.

Bars, restaurants, and shops selling anything but food and other staples must shut down. All leisure and sports activities also have to close, including cinemas, theaters, swimming pools or football grounds.

“We will (eventually) return to the routine of our jobs and again visit our friends and loved ones,” Prime Minister Pedro Sanchez said in a nationally televised address.

“Until that time comes, let’s not waste energies that are essential now. Let’s not lose our way,” he said, urging all to stay home.

Shortly after the announcement, the government said Sanchez’s wife, Begona Gomez, had tested positive for coronavirus.

Spain had 193 coronavirus deaths and 6,250 cases so far, public broadcaster TVE said, well up from 120 deaths reported on Friday.

Schools are shut across Spain and a first package of economic steps was announced on Thursday.

The government had been expected to announce further measures on Saturday to mitigate the economic and social impacts of the crisis, with aid for companies and workers. But after a seven-hour cabinet meeting, ministers could not agree and Sanchez said the measures would wait until the next meeting.

In the steps announced on Saturday, domestic transport will be curtailed from Monday, with airline, train and boat operators ordered to cut services by at least half and to ensure a maximum possible distance between passengers on all means of transport.

City buses and metro will still fully work and international flights are not affected.

Employers must let staff work remotely and the government said people should chose that option whenever possible. Most judicial proceedings are suspended.

Sanchez said the measures would have a major impact on citizens and businesses, but promised the government would work to mitigate it.

“I want to tell the workers, the self-employed, and businesses that the government of Spain is going to do everything in its power to cushion the effects of this crisis,” he said.

The decree does not foresee closing the borders and allows exemptions: the green light to stay open applies to supermarkets and petrol stations, but also hairdressers.

Spain’s Interior Ministry will control all police forces, including local and regional ones, under the 15-day emergency, and the armed forces would be on stand-by to help if needed.

The health and transport ministries would have nationwide reach, taking over some local or regional powers, which Catalan and Basque leaders immediately criticized.

A government source said the emergency measures envisage the possibility of ordering companies to produce certain goods, such as protective masks for instance.

On Friday, the World Health Organization said Europe had become the epicenter of a coronavirus pandemic.

Throughout Madrid people went out on their balconies at 2100 GMT to show their gratitude to health workers by applauding. In the largely deserted streets below, reaction to the emergency measures was mixed.

“It’s going to be difficult,” university professor Leopoldo Agraz said of the confinement at home. “Whoever has to work at home like some colleague I have from the university, with five children at her side, is going to have a hard time…”

But others like student Carlos Losa said: “The truth is it’s necessary. It is necessary because I believe that the spread of the coronavirus had to be stopped.”