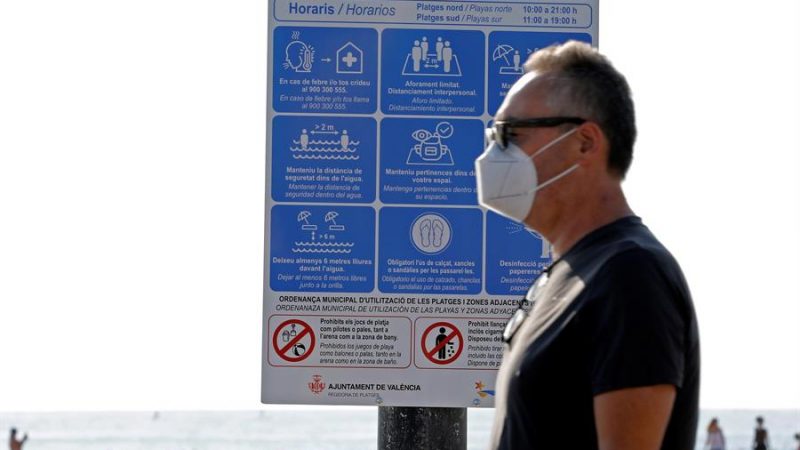 Masks must now be worn in public in all outdoor areas. [EFE/ Juan Carlos Cárdenas]

Spain will as of Wednesday (31 March) implement a series of new and tougher measures to prevent COVID-19 infections under the so-called New Normality Law, EURACTIV’s partner EFE reports.

The government’s plan for what it has termed the pre-“de-escalation” phase was published on Tuesday in the government’s official gazette (Boletín Oficial del Estado, BOE), ahead of the expiry of restrictions first implemented last year on 9 May.

The new law makes mask wearing mandatory in all public spaces across the country, regardless of the distance with others, including at the beach, swimming pools, or parks, for example.

Until now, wearing masks was only mandatory in public or outdoor spaces when it was impossible to keep a 1.5-metre distance from others, though some Spanish regions had established tougher requirements and many exceptions to that rule.

Regions are no longer permitted to make their own exceptions. According to the text, “persons aged six and older are obliged to wear masks … on public roads, in open-air spaces, and in any closed space for public use or open to the public.”

The new legislation also contains many de-escalation measures agreed in June when the first decree of the state of alarm approved by Spain’s socialist government expired.

The new law also includes other measures related to the regularisation of transport, medicines, public health standards, and to guarantee the capacities of the health system.

The new law will apply “Until the government declares in a reasoned manner and according to scientific evidence the end of the health crisis situation caused by COVID-19,” the legislation states.

In the decree approved last June, which the government defined as that of “the new normal”, the phases of de-escalation were regulated, something already surpassed in the measures currently applied to combat the pandemic, El País reported.

The law published in the BOE transposes the text of that decree, and continues to refer to concepts such as the “Plan for the Transition to a New Normality”.

However, forcing people to wear masks while sunbathing on beaches or in swimming pools, even while maintaining a safe distance, could be another severe blow to Spain’s highly impacted tourism sector, which in 2019 accounted for 12,4 % of the country’s GDP.