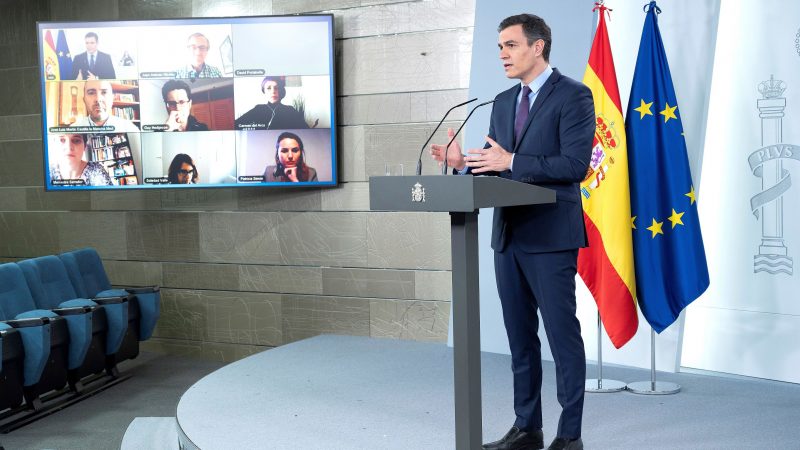 “The exceptional suspension period for all non-essential economic activities that we established two weeks ago has just ended,” Sánchez told a press conference on Sunday (12 April).

“Between Monday and Tuesday, the economic activities that were hibernated on March 30 and, only those, will resume. And I want to underline that. Only those.”

“The other activities that were interrupted when the state of alarm was decreed will continue to be interrupted. General confinement will be the rule for at least these next two weeks,” the prime minister added.

He warned that things would not go back to the way they were two weeks ago and that the move was not de-escalation of the lockdown put in place on 13 March.

All workers resuming activities on Monday will have to uphold measures to protect citizens from the spread of the virus by respecting social distancing and using protective equipment when necessary, he said.

At a previous press conference with the technical committee, María José Rallo del Olmo, secretary-general for transport, urged companies to allow for flexible working hours and to promote working from home in a bid to avoid large gatherings of people on public transport and in workspaces.

If working from home was not an option, the transport secretary said keeping a social distance from other people and using face masks on public transport were recommended.

After weeks of reduced services, trains and bus services would be increased at peak times, Rallo added.

Around 10 million face masks have been distributed across train and subway stations across the country for those using public transport.

The health ministry has given a series of instructions to businesses due to open next week underscoring the need for all public and private spaces to be adequately cleaned and disinfected regularly.

People on public transport and in offices and factories have been ordered to maintain a safety distance of at least one meter if not two.

For businesses unable to guarantee a safe working distance among employees, the ministry has suggested a staggered time table.

Sánchez addressed the impact the period of hibernation had had on the economy and said that “a great economic pact” was needed.

“The destructive power of the virus distinguishes neither territories nor political colours. We are immersed in a total war that concerns us all and the answer must be common,” the prime minister added.

He commended the European Union for reaching an economic agreement despite the fact it had not met Spain’s demands fully.

Sánchez called for a de-escalation of political tension on a national level and urged all parties to stop using aggressive language and to instead come together in the face of the pandemic.

He called for a great pact among all parties to pave the way for unity, dialogue, consensus and agreement.

“My lips will utter nothing other than unity, unity and gratitude,” towards all the frontline workers and authorities that are gathering to fight the spread of Covid-19.

As Spain prepares to allow non-essential workers to return to work, the country recorded an increase in the number of coronavirus deaths but a promising drop in the rate of infection to 2.5%.

New infections fell to 4,167, and the rate of infections stood at 2.5 percent, the lowest rate since the start of the pandemic which has infected 166,019 people in Spain, María José Sierra, from the Coordination Center for Health Alerts and Emergencies, said on Sunday.

“If our health system recovers, we will move forward with the measures,” Sánchez said.

“The de-escalation will be progressive and very cautious from two weeks on,” the prime minister told reporters.