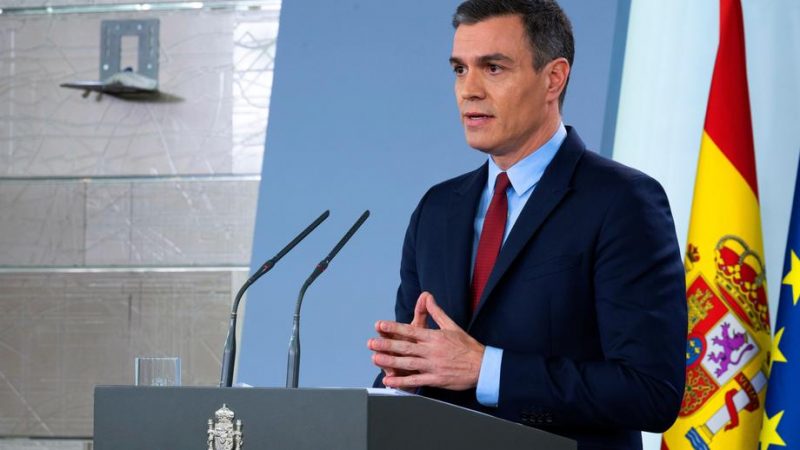 Spanish Primer Minister, Pedro Sanchez, during a press conference after the an extraordinary meeting of the Minister Council on the coronaviurs situation at the Moncloa Palace in Madrid, Spain, 14 March 2020. [EPA-EFE/Borja Ruiz de la Bellacasa / POOL]

Sanchez’s government decided on Saturday (14 March) to limit with immediate effect the movement of people for 15 days to what is absolutely necessary: to buy food, medicine and other essential goods, to take care of the elderly or go to the hospital or the bank.

And people can only move about individually, with the exception of disabled persons who require assistance.

The country is shielding itself against an epidemic that in less than a week has seen cases multiply by 10, making Spain the fifth country with the most COVID-19 cases in the world, behind China, Italy, Iran and South Korea.

According to the latest official data, there were over 6,250 infected Saturday – over 2,000 more than Friday – and 193 deaths due to COVID-19, with some 500 people discharged from hospitals.

Almost half of the cases were reported in Madrid and its autonomous region, which is home to 6.7 million people.

The other two most affected regions are Catalonia in the northeast and the Basque Country in the north. Both have the most-populated cities after Madrid.

While the police will be responsible for enforcing compliance with the emergency regulations, Spain’s armed forces stand ready to assist in that task if needed.

The various municipal and regional law enforcement agencies have been placed under the command of the National Police.

The decree also amounts to a suspension of the authority of the governments of Spain’s autonomous regions over matters to do with health and public safety.

All health facilities in the country, including private clinics and military hospitals, will be enlisted in the effort against the coronavirus. Companies that make medication, equipment and other healthcare items will be subject to requisition from the government.

Several of the autonomous regions, including Catalonia, decided earlier to isolate themselves from the rest of the country.

But while Sanchez did not impose restrictions on movement between regions, he ordered a 50-percent reduction in long-distance travel via road, air, sea or rail.

Villagers in coastal areas such as Catalonia, Valencia or Murcia, on the Mediterranean, have seen with concern how many people from Madrid were moving to their second homes to try and escape the emergency, ignoring the advice of health authorities.

The measures which will be rolled out across all of Spain were already being felt today in the Madrid region: shops, leisure and cultural centres, restaurants, bars and parks were all closed.

Police were forced to deploy drones to admonish residents who defied the instructions to remain at home.

There were long queues in front of food, tobacco and drugstores, which will remain open due to the recurring fear of shortages.

The weather, mild and sunny this week, will facilitate the general isolation as winter temperatures are expected to return throughout the country.

“We have very difficult weeks of effort and sacrifice ahead,” Sanchez said.

“This is a battle we will win, on that there is no argument. What is important is that we pay the lowest possible price for that victory,” the prime minister said.

There will also be no major celebrations like the usual ones in the coming weeks: the Fallas in Valencia were cancelled and also today the biggest Easter celebration, which is celebrated in the Andalusian town of Seville in southern Spain.

The episcopal conference, the highest body of the Catholic Church, asked the faithful to pray at home and devotees of the virgin of Seville, the Virgin of Hope of Macarena, to do so online as there is a continuous live stream.

Following the experiences of Italy, another Mediterranean country with social customs similar to those of Spain, Spaniards have turned to social media to encourage each other to stay at home. The #quedateEnTuCasa (stay at home) hashtag is already trending on Twitter.

Doctors and nurses and sports stars have contributed with messages on social media, following the example of Italians who went out onto the balconies of their homes Saturday to applaud health workers for their efforts in combating COVID-19 in the country.