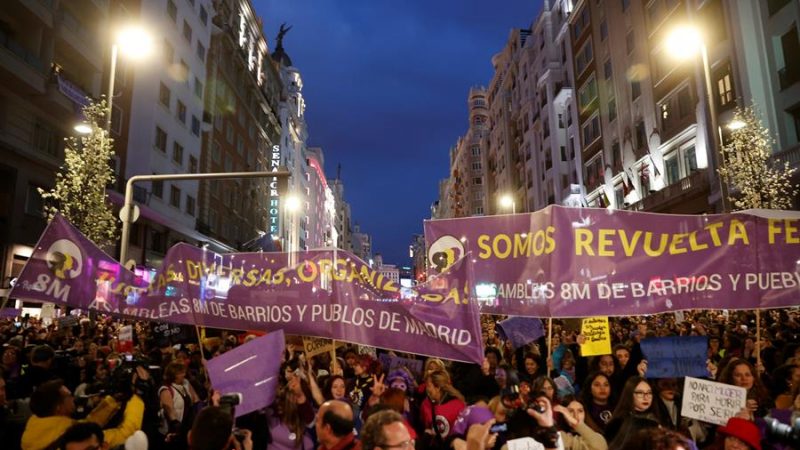 The decision to allow marches celebrating International Women’s Day to take place in big cities such as Madrid and Barcelona on 8 March, 2020, was controversial. [EFE/ Juan Carlos Hidalgo]

The Spanish government has admitted it made mistakes in the early days of the pandemic in a report by the National Security body, Spanish media reported. EURACTIV’s partner EuroEFE reports.

At the onset of the pandemic in March and April 2020, the Spanish socialist executive had to make decisions with “partial or little updated information” at its disposal, the report reads.

According to the document, the Spanish epidemiological surveillance system was not sufficiently prepared to process such a huge volume of data and react with the high speed required “for correct decision making”, El País reports.

The report proposes the system be updated and that a “greater digitalisation and automation of the epidemiological surveillance processes”, should be placed in the hands of the 17 Spanish regions.

It also calls for a reinforcement of primary and hospital care so that the country’s national health system can in future react to an increase in demand and avoid pressure on intensive care units.

After noting Spain’s dependence on essential products for the pandemic, such as masks and PCR tests, due to “the absence of planning and a strategic reserve”, it proposes “developing the national industrial capacity for self-sufficiency” in critical situations.

Although the National Security Annual Report does not disclose details nor gives concrete examples of these “mistakes”, it refers to a very controversial one: the decision to allow marches celebrating International Women’s Day to take place in big cities such as Madrid and Barcelona on 8 March, 2020.

At the time, the use of masks or social distancing was not mandatory and the government had not yet decreed the state of alarm.

The report also points out that, although Spanish researchers are playing a relevant role in the development of COVID-19 vaccines, with 10 groups at an advanced stage, “effective integration” between scientists and industry is still required.

This is not the first time the Spanish government, a coalition of the socialist PSOE party and the left-wing Unidas Podemos, has admitted having made mistakes in its management of the coronavirus pandemic. However, it is the first time the executive has put it in writing and sent a report about it to parliament.