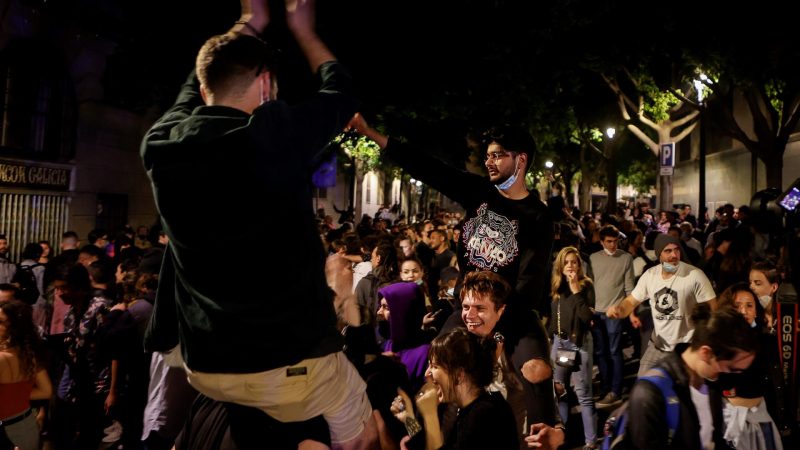 Health authorities have expressed concern over scenes of huge crowds gathering in Madrid and Barcelona, with hundreds of people drinking and celebrating in large groups. [EFE/Quique Garcia]

Spanish politics has been thrown into turmoil following the expiration of the pandemic-era state of alarm at the start of this week which formed the legal basis for the country’s coronavirus restrictions, with health authorities warning regions no longer have the means to tackle infections. EURACTIV’s partner EFE reports.

A bitter confrontation was sparked between the socialist government and the conservative opposition after Spaniards celebrated the dawn of a new normal after the country’s pandemic-era state of alarm expired at midnight on Sunday.

Health authorities have since expressed concern over scenes of huge crowds gathering in Madrid and Barcelona, with hundreds of people drinking and celebrating in large groups. Experts have stressed that the pandemic is not over, despite the expiration of the state of alarm.

Fernando Simón, the head of Spain’s coordination centre for health emergencies and alerts, has warned about a “fourth wave” of the pandemic. “Nobody knows what can happen” in the next few days, he said.

Spain’s vaccination campaign is meanwhile gathering pace, with almost 30% of the country’s population having had at least one jab, according to the health ministry. Prime Minister Pedro Sánchez, said on Monday the country is only “100 days away from reaching herd immunity”.

The Spanish government, a coalition of the socialist party (PSOE) and left-wing United We Can (Unidas Podemos), has so far refused to propose a new legal framework to allow regions to implement new restrictions in case of new COVID-19 outbreaks.

The request for a new framework from the centre-right opposition party Partido Popular (PP) and the far-right VOX party has been shot down by the ruling left-wing executive.

The government said it would not ask parliament to approve yet another extension of the state of alarm, which was first decreed last March and has brought economic devastation particularly for the country’s tourism and hospitality sectors.

For over a year, most of Spain has been under strict restrictions including travel bans and nightly curfews. It was among the worst-hit European countries in the early days of the pandemic.

Spanish judges are divided over whether the imposition of curfews to combat new outbreaks represents a contravention of citizens fundamental rights or whether it is proportional to the aim of saving lives.

Now the regional governments must turn to the Spanish Supreme Court to seek advice following the expiration of the state of alarm about the legal basis for fresh restrictions.

However, Sánchez said during a meeting with his Greek counterpart, Kyriakos Mitsotakis, on Monday in Athens, that the 17 Spanish regions have all the necessary instruments to combat the pandemic without the need to undertake legal reforms.