The Brief, powered by APPLiA – Another failure of European solidarity 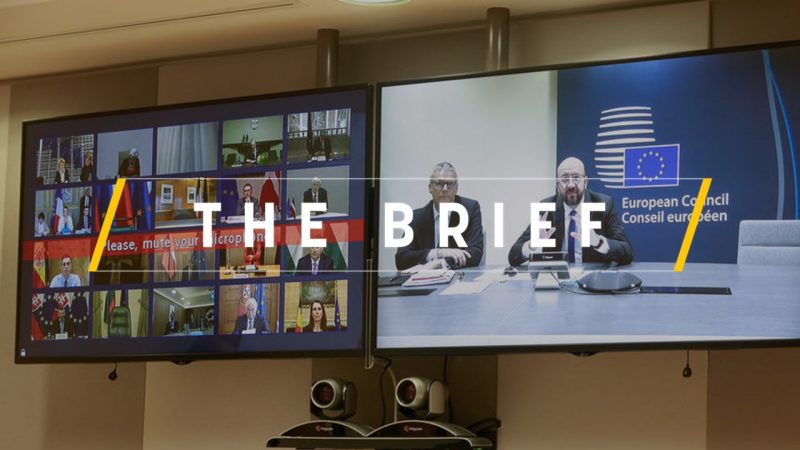 Europe’s coronavirus epidemic denial has come to a sudden end: Italy faces an unprecedented shut-down and other countries are anxiously preparing for their own potential quarantine measures. Another European crisis is looming but solidarity is, once again, in short supply.

The efforts to halt the spread of the coronavirus are putting the healthcare systems and economies of many countries to the test: overcrowded hospitals are putting lives at risk and restricted freedom of movement has paralysed many business sectors.

The whole of Italy has been on lockdown since Tuesday, fighting a rapidly increasing number of people infected and killed by COVID-19, with overwhelmed hospitals where, according to reports, doctors are forced to decide which patients get treatment based on who is most likely to survive.

“There will be no more red zones (…). There will be a single protection zone Italy,” said Prime Minister Giuseppe Conte, restricting freedom of movement and assembly. There was no time to waste, Conte said. Virus anxiety instead of Dolce Vita.

Numbers suggest that other European countries are only a few days away from a similar fate – a piece of information which, if used wisely, could buy the national health care systems precious time to prepare.

The coronavirus is likely to affect more than 70% of Europe’s population, Bulgaria’s PM Borissov and Germany Chancellor Angela Merkel broke to the public after a hastily convened teleconference of EU leaders on Tuesday (11 March) where they sought to improve coordination to contain the spread of the virus.

The efforts to halt the spread of the coronavirus are straining the long underfunded and neglected national healthcare systems and economies of many countries: overcrowded hospitals are putting lives at risk and restricted freedom of movement has paralysed many business sectors.

Over the past days, criticism has risen over member states, especially France and Germany, for restricting the export of protective material to countries in need, such as Italy.

However, some in the European Commission have started to argue that Germany’s decision could be considered wise in light of efforts to have a more targeted distribution of personal protective equipment in the long-run, wherever it will be mostly needed in case of more emerging hotspots.

It is true that health ministers from 20 member states have launched joint procurement measures for personal protective equipment and respiratory machines. But the EU executive still does not have a clear picture about member states’ estimated stocks, as in many cases they are considered a matter of national security.

And, while the European Commission’s efforts largely remained on the communication level, with phrases like “we stand by Italy during these trying times”, the Chinese government has offered to send Italy 1,000 lung ventilators, two million face masks, 20,000 protective suits and 50,000 test kits.

So far Europe has failed to respond truly to Italy’s plea for help. But what if other countries get into the same position? Will there be European solidarity?

Merkel said on Wednesday EU countries should not isolate themselves, but should work together to limit the economic impact. “Closing borders is not an adequate way to prevent the further spread of the virus.”

A day earlier, Austria and Slovenia announced that they would impose restrictions on the border with Italy, with other countries in the region considering similar measures.

The author of this Brief could not help noticing some parallels between this and the migration crisis, which has has been wiped off the front pages by corona.

The health crisis is only the latest evidence of failed European solidarity. Only this time, the principle of solidarity could be even more at stake than during the migration crisis, as it fundamentally threatens to erode the trust between citizens, their national governments and Brussels.

The crises which have hit Europe since the start of this year, one could argue, were largely steered by external factors. In the current coronavirus crisis, a failure in solidarity might raise the question: Where is the Europe that is supposed to protect its citizens?

Because strength should be projected not only during happy, peaceful times but when it really matters.

On second thought, it could get even worse: what if the two crises collide?

On Sunday, an infection with the sars-Cov-2 virus was detected in the overcrowded Moria refugee camp on the Greek island of Lesvos. An outbreak in an overcrowded camp, where refugees live in miserable conditions, would spread like wildfire and have serious consequences, for the refugees and for Europe.

The European Commission unveiled its new circular economy action plan, confirming the EU’s intention of halving municipal waste by 2030, and suggesting to offer consumers a new “right to repair” for computers and smartphones.

The spread of the coronavirus epidemic is set to derail post-Brexit trade talks between London and the EU, UK Cabinet Office minister Michael Gove admitted.

With evolving technology and changing military doctrines, nuclear arms control should be brought back to top attention, but it is “increasingly difficult to come to any agreement among the critical players” in the world, MEP Sven Mikser told EURACTIV in an interview.

EU transport ministers agreed that greenhouse gas emissions from the shipping sector need to be reduced significantly. But a looming dispute over whether to tackle the sector at the EU or global level could scuttle efforts.