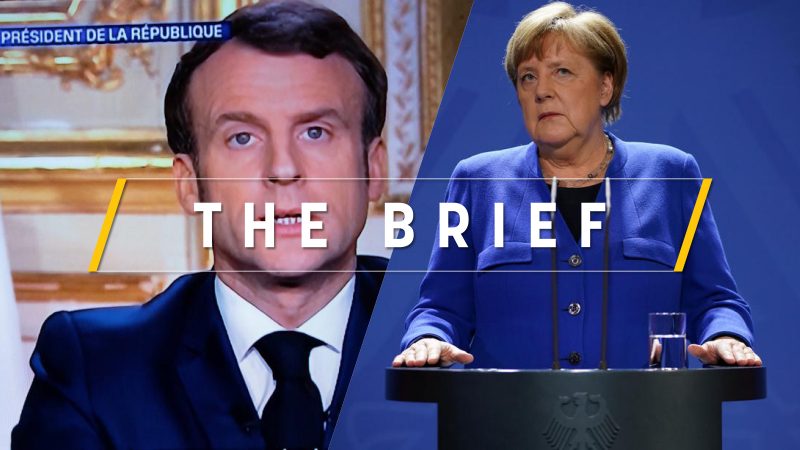 French author Francois Rabelais’s “break the bone to suck the substantial marrow” formula is a good way of deciphering these differences. The aim is to show what lies behind the words and the staging of Emmanuel Macron and Angela Merkel.

Berlin: Merkel addresses any journalists who are still in place in the German capital; the press conference is due to be live streamed. The press team respects the health regulations, the chairs are at least one metre apart, the German and European flags are on the podium.

The Chancellor opens her statement with a word of welcome to all, notes in hand, the blue background with the emblem of the Federal Republic of Germany in the background. She supports her message with regular references to science. She answers questions from journalists and her speech lasts no longer than fifteen minutes at most.

The scientist she once was has resurfaced to become what the New York Times described as a no-nonsense chancellor. The facts are there, they are difficult to face, but they have to be and that is precisely what we are going to do to act accordingly. No more, no less.

Her address does not veer into the territory of Churchill’s famous speech because it is obvious to the German chancellor that we are not at war.

Paris: Macron addresses the French, his “chers compatriotes”. No press conference but televised speeches, which systematically take place at 8pm because in France it is the time for the sacrosanct television news.

His speeches open with the Marseillaise and a close-up on the Élysée Palace. Then Macron looks the camera straight in the eye, with the gilding of the palace, the French and the European flag in the background.

After the French continued to recklessly go out and go about their business as if nothing was happening, his tone rose several notches last night to end with an openly warlike vocabulary. “We are at war,” the president said six times. After all, he began his term as president by calling himself Jupiter.

Two radically different styles, which can irritate on both sides of the border, but both for a single purpose, to mobilise the nation against the virus.

But that was yesterday and this crisis has shown how much and how fast the situation can change. In Germany perhaps more than anywhere else: the chancellor has scheduled an address this evening on German television channels. It is almost unheard of.

Apart from the traditional New Year’s speech, Merkel has never made a live televised address about an extraordinary political situation. Germany, and the rest of Europe, will be listening carefully.

EU leaders confirmed the proposed closure of the EU’s external and Schengen borders for at least 30 days as the bloc continued struggling to come up with a unified response to the coronavirus outbreak.

To cushion the economic impact of the coronavirus, French Economy Minister Bruno Le Maire has announced a series of measures to support businesses, including nationalisation.

Belgium declared a lockdown for the entire country until 5 April, following the example of several European countries, after the Wilmès government was given powers of attorney to deal with the crisis.

The UK unveiled an unprecedented £350 billion financial rescue package to “support jobs, incomes and businesses”, in a bid to offset the economic damage unleashed by the coronavirus crisis.

Airlines, bus companies and train operators could be brought under public ownership by the UK government in order to preserve transport links during the coronavirus outbreak, a minister suggested.

The Commission also clarified what travellers can expect from the EU’s passengers rights codex, in an attempt to alleviate the concerns of thousands of people who have been left stranded by the outbreak’s impact.

The Trump administration enacted its planned duty rate increase for aircraft imported from the EU, amid the continuing spread of COVID-19 and fears of a subsequent recession. These measures will increase the rate from 10 to 15%, particularly impacting Airbus.

Supermarkets in Germany will not close and there will be no problems with food production, says German Agriculture Minister Julia Klöckner. Meanwhile, at the European level, officials are seeking ways to simplify cross-border food transports.

Merkel makes a rare address to the nation later this evening.