The Brief – The quiet revolution 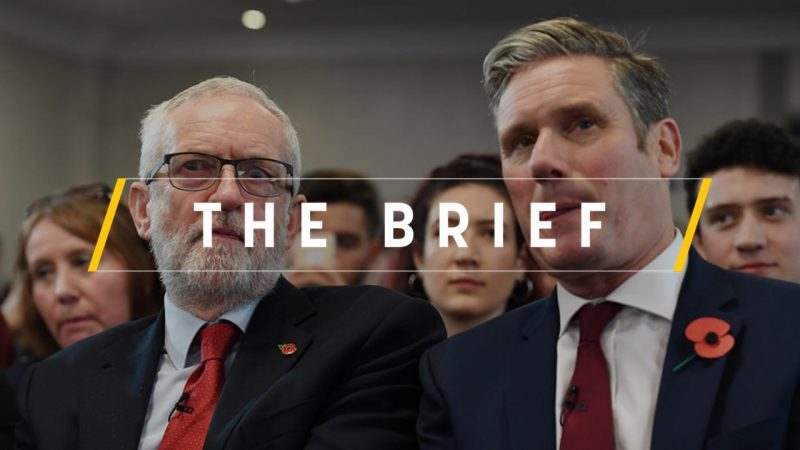 Partisan politics has been one of the collateral victims of the coronavirus crisis. So preoccupied were most Britons by the coronavirus, albeit understandably, that the quiet revolution was barely noticed.

The Labour party’s dalliance with the far-left ended on Saturday (4 April) with the announcement of Keir Starmer’s landslide win in the party’s leadership contest.

With the UK in lockdown, a party conference and laudatory speeches were replaced with recorded video messages.

The party’s Brexit spokesman, Starmer was behind the policy of promising a second referendum on EU membership. Given how badly Labour performed in its Brexit-voting former heartlands in December’s election, that was thought to be a weakness for Starmer, but it didn’t stop him winning a majority among party members, trade unions and affiliates.

The rest of the purge of the left was completed by Monday afternoon when Starmer finalised his team. Both Jeremy Corbyn and his supporters are out. Rebecca Long-Bailey, who finished a distant second to Starmer, is the only Corbynista to get a senior party job.

A former human rights lawyer and director of public prosecutions, Starmer already looks like a potential prime minister, which his predecessor never did.

For the moment, people have far more important things to think about. But politics will return after the lockdown, and the economic and social conditions will be radically different than they were pre-crisis.

‘We’re all Marxists now,’ Labour MP John McDonnell quipped last month when the scale of the government’s economic rescue package to combat the pandemic became clear. McDonnel had been the Shadow Chancellor of the Exchequer in Corbyn’s shadow cabinet.

The irony is that the £350 billion financial rescue package unveiled by the Conservative government dwarfs the investment plan proposed by Corbyn ahead of December’s election.

Prime Minister Boris Johnson & co won’t be able to talk about the magic money tree, having raided it to fund the response to the COVID-19 pandemic. Never before has a government offered to pay the wages of furloughed workers, or converted sports and conference centres, free of charge, into emergency hospitals.

When the coronavirus crisis is over, and the war-time mentality of ‘pulling together’ fades, there will likely be an inquest into the slow and error-riddled response of the Johnson government to the pandemic.

So, too, will the question of the future relationship between the UK and the European Union.

COVID-19 has derailed the already tight timetable to agree a new trade deal. An extension to the eleven-month post-Brexit transition period will certainly be needed before a new pact can be agreed. The alternative is to compound the economic damage caused by COVID-19 with an entirely unnecessary hard Brexit.

The December election killed off the question of the UK’s EU membership.

But the UK’s failure to be part of the EU’s joint procurement of ventilators and personal protective equipment has left it scrambling to find domestic and international suppliers to avoid needless loss of life. When the dust settles, this dangerous cock-up will serve as a reminder that isolation equals weakness.

EU member states and the European Commission should “thoroughly analyse the experiences gained from the COVID-19 pandemic” in order to inform future policies across the entire spectrum of the digital domain, leaked Council documents seen by EURACTIV reveal.

More than 700 leaders of the Belgian start-up scene have launched a call on the country’s federal and regional governments to support startups and scaleups with additional government aid to avoid their decline during and after the coronavirus pandemic.

The EU should have a fund capable of issuing debt totalling up to 3% of EU’s GDP (gross national income), or around €420 billion, to support the most affected countries, which would be repaid in proportion to each member state’s GNI, according to a French proposal seen by EURACTIV.

Member states are making use of the new flexibility within EU state rules mainly to guarantee liquidity for all companies heavily affected by the economic fallout of the COVID-19 outbreak. We have looked into the different schemes that have been approved so far.

The European Commission’s DG SANTE has launched an internal call to boost coronavirus-fighting capacity in order to prepare better for future pandemics, according to a document seen by EURACTIV.

Ireland’s Prime Minister Leo Varadkar is to serve as a doctor in his country’s fight against the ongoing spread of the deadly coronavirus, the leader’s office announced.

French agricultural producers and MPs are urging the European Commission to set up food stocks to avoid falling prices and the destruction of certain food products.