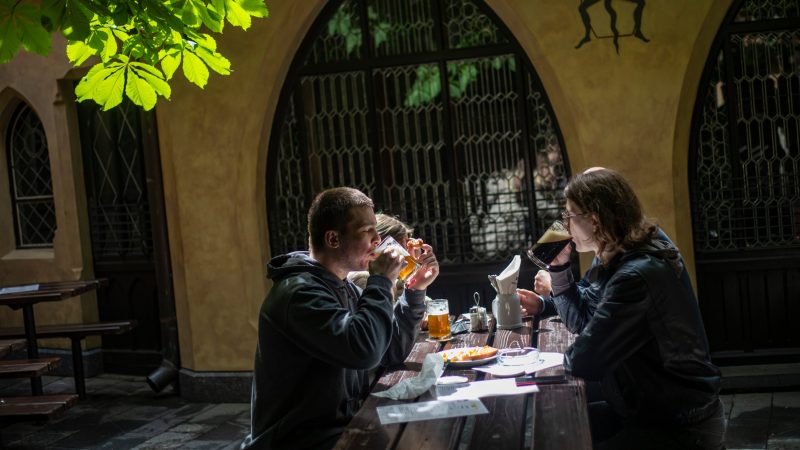 Guests drink beer at reopened garden 'U Fleku' brewery in Prague, Czech Republic, 17 May 2021. Restaurants, pubs and cafes across the country are allowed to open their outside seatings from 17 May 2021. [Martin Divisek/EPA/EFE]

The world’s thirstiest beer drinkers finally clinked their pilsner mugs in the drizzle on Monday (17 May), as beer gardens opened despite unseasonably cold grey weather in the Czech Republic, a landmark event after five months of COVID-19 lockdown.

“Finally I am sitting here as a human,” said Martin Krisko, savouring his cold beer with a meal served hot, on a plate, rather than lukewarm in a plastic takeaway container, at the Beer Time pub in Prague’s former industrial quarter Smichov.

The Czech Republic, home to the original pilsner, consumes the most beer per capita in the world, and reopening its pubs for outdoor service is seen as an important step in its plans to relax its COVID-19 restrictions.

The country was hit hard by the second wave of COVID-19, with one of the highest per capita death rates in the world.

Lately, it has been reporting steadily decreasing numbers of coronavirus cases and hospitalisations. As of Monday morning, the seven-day count of new cases per 100,000 people decreased to 71, on course for further easing of restrictions.

A vaccination programme has gathered pace, with the government opening inoculations on Monday to those over 40. As of the beginning of the week, 4.1 million doses had been distributed in the country of 10.7 million people.

In Prague’s historic centre, locals gathered for beer in places usually taken by tourists, although gloomy weather with rain and temperatures around 15 degrees Celsius kept the numbers thin.

“When everyone is inoculated and the weather turns nice, things will roll,” said Jiri Zaman, tapping pints at one of the restaurants in the cobblestoned Old Town Square.

Secondary schools are still shut, and some Czechs are critical of the government’s priorities in opening restaurant terraces first. But gyms opened too on Monday.

Gabriela Chomikova, headed to her fitness centre for the first time this year, said she was just grateful to be around other people, “rather than to be locked at home”.